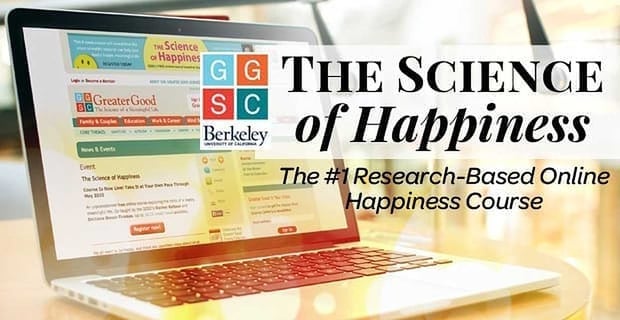 TL;DR: Science of Happiness is the first online class of its kind to use psychology, sociology, neuroscience, biology and history to help people achieve true happiness in their lives, whether personally, professionally or romantically.

Can you honestly say you’re happy? If you can’t, then there’s no better program to turn your life around than Science of Happiness.

Taught by Dacher Keltner, founder of the Greater Good Science Center and professor of psychology at UC Berkeley, and Dr. Emiliana Simon-Thomas, the GGSC director, this one of a kind course is changing millions of unhappy lives one scientific fact at a time.

The expert data behind the course

Launched in September, Science of Happiness is a free eight-week course based off research by Keltner, as well as research from across the country that GGSC reports on.

“We’ve found our online content has really attracted a devoted audience, but people wanted more guidance as to how to incorporate the science in their own lives,” she said.

Throughout the process, participants will fill out surveys, while Keltner and Simon-Thomas will track their happiness levels before, during and after.

Available through May 2015, Science of Happiness is a convenient program that allows people to go through it at their own pace. Plus those in helping professions, such as nursing, have the option of receiving continuing education units to maintain their credentials.

While the participants range in ages from 18 to 80, most of the them (more than 100,000 to be exact) are students in their 20s and 30s, who Proulx said are more likely than men and women who are older to seek an online course like this.

“The data does indicate that those born in the 1980s, 1990s and 2000s report more loneliness and less social connection than people who are middle aged,” she said. “So it may be that they are really looking for pathways to more connection and feelings of well-being.”

How the program can change your life

For example, did you know happy people tend to have lower levels of cellular inflammation?

This was examined in a 2013 GGSC article where UCLA’s Steve Cole and UNC’s Barbara Fredrickson “evaluated the levels of cellular inflammation in people who describe themselves as ‘very happy.'”

And want about increased emotional health? Well, happiness can help with that, too.

According to Proulx, happiness gives people self-confidence, which in turn gives them confidence in romantic relationships.

“And the course encourages practices like gratitude, which has been shown to boost bonds between couples by upping levels of oxytocin, which is the neuropeptide that creates strong bonds within groups (families, romantic relationships, etc),” she added.

With the Science of Happiness program, not only does Proulx hope she and her team can boost people’s feelings of happiness, but they also hope to show people their overall sense of well-being is in their hands.

“We aren’t just products of our upbringing/genes/circumstances – we can grow and open ourselves up to more feelings of connection with each other, which is a huge part of happiness,” she said.

Simon-Thomas added to that by stating:

“For the past 10 years, the Greater Good Science Center has been trying to share the science behind the idea that the best way to pursue happiness is through pursuing a meaningful life – meaningful being constituted by committing yourself to a greater purpose beyond your own self-interest,” she said. “This includes meaningful relationships, community and a sense of belonging and contributing to the greater good.”

So if you’re ready for a happier life, visit greatergood.berkeley.edu.

Sparkology: More Than Just a Dating Site; It’s a Movement

LiveDatingAdvice.com: The Future of Dating