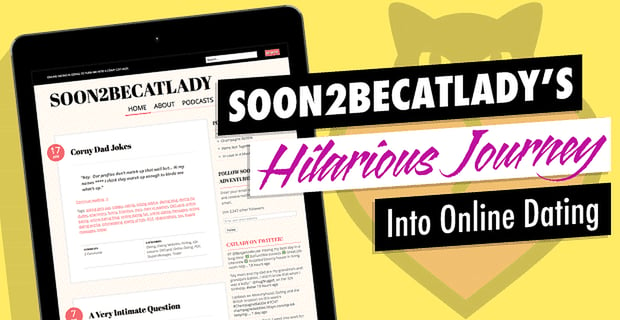 The Short Version: Anyone with online dating experience will warn you that not everyone is a winner — unless it’s a competition to see who can send the most ridiculous message. In such a contest, few are more qualified to be a judge than CatLady, of Soon2BeCatLady. The chronicle of her adventures in online dating, Soon2BeCatLady is home to all of the corny, kinky — and creepy — messages CatLady has received, and her hilarious replies. Her blog and podcasts gleefully display the worst (or best?) that online dating has to offer, showcasing the mounting evidence for her conviction that she may yet become a crazy cat lady.

I know a woman who is always happy. No, really. Every time I see her, she is smiling and laughing, appearing to be genuinely pleased with life. As a perpetual pessimist, I’ve found her to easily be the most puzzling person I’ve ever encountered. At one point, I asked her to share her secret. Her reply has turned out to be the best advice I’ve ever heard: “Instead of being angry about things, be amused by them.”

I was recently reminded of the happy woman’s philosophy when I encountered the blog Soon2BeCatLady. Like my happy friend, CatLady has chosen to be amused in the face of negativity, maintaining her humor even on her — decidedly hazardous — journey into online dating.

CatLady started her blog to share all the funny and unbelievable adventures she’s had in online dating.

Soon2BeCatLady’s blog and podcasts chronicle many of the ridiculous, raunchy, and occasionally reprehensible responses she’s received, and her entertaining replies — complete with delightfully snarky commentary. Rather than be offended by the odd or obnoxious, CatLady turns the rampant negativity of the Internet into delicious comic fodder.

According to CatLady, it all started innocently enough. After recovering from the dissolution of a five-year relationship, she needed to learn how to date. She created her online profile with the simple desire to meet somebody new, and the idea that, “This will be exciting!” Oh, little did she know.

When the messages started rolling in, each was more absurd than the last. Far from being dismayed by their content, she found them hilarious — and realized she had inadvertently struck gold.

“I got this one message, and it had me rolling on the ground,” CatLady explained. “I knew then, I need to start writing this down. This needs to be a book, this needs to be something.”

So she started recording her journey, creating Soon2BeCatLady as a place to share her stories. Over time, the site has become more than a simple blog, turning into a place of commiseration for those who agree that online dating may be just absurd enough to turn us all into crazy cat ladies.

He Wrote What?! — Stories From the Wacky World of Online Dating

Anyone who spends enough time online dating will eventually get at least one message so blatantly bizarre that the only possible response is “What?!” The pages of Soon2BeCatLady abound with CatLady’s unequivocally enigmatic experiences, published for your enjoyment — and proof that you are not alone.

“I want to dowse you in green paint and spank you like a disobedient avocado.” – Future Mr. CatLady?

Solicitations condoning avocado abuse are only the tip of the absurdity iceberg in the Soon2BeCatLady blog. When it comes to bad pickup lines, CatLady has received them all. She’s gotten — and published — propositions that include everything from cheesy one-liners to filthy fantasies. Some of the messages she receives are so explicit, CatLady is compelled to add disclaimers before posting them. (Even I felt myself wanting to ask some of these people, “Do you email your mother with that keyboard?”)

The blog posts from Soon2BeCatLady range from absurd to disturbing and everything in between.

Some of the best posts describe the encounters when meeting an online acquaintance in the offline world. For a good lesson in why you should practice a bit of online decorum, try this post about a dirty message from a doctor… and the follow-up describing their hilarious run-in.

In fact, the only type of dating stories you won’t find on Soon2BeCatLady? The happy-ending kind. “I don’t really blog about the great dates that I’ve had,” confirmed CatLady, chuckling. “People kind of give me grief for that, but, well, good dates are boring.”

Podcasts for Life, Love — and Finding the Perfect Bra?

After so many years surviving the online dating world, CatLady has gained a lot of knowledge. She happily shares that knowledge with the world through her various podcasts. The shows cover all manner of topics, from boyfriends to brassieres.

It all started with the aptly named “Nothing in Common” podcast about dating and relationships. “It’s basically me and two guys who know nothing about dating,” CatLady said. “We get in dating questions and talk about them. It’s called ‘Nothing in Common’ because — we don’t. It’s a lot of fun.”

For ladies night, try the “Champagne Babble” podcast. Covering all manner of girl-centric topics, some of the most popular episodes include awkward accidental flirtations and tips on finding the best clothing fits.

“In Love in a Movie” consists of an in-depth discussion between CatLady and her best friend, Ben, breaking down your favorite romantic comedies. Though no longer in production, the existing episodes cover classics, like “Sleepless in Seattle” as well as newer flicks, including “The Proposal.” This podcast is perfect for getting the full story on your potential picks for date-night movies.

The newest of CatLady’s podcasts, “We’re Not Together,” includes her best friend and “In a Movie” co-star, Ben. The series was inspired by the world’s insistence that the two friends must be madly in love — despite their insistence to the contrary. The duo discusses daily life, the dynamics of friendship, and, yes, dating — other people, that is.

While she certainly didn’t set out to become a dating expert, CatLady has earned her status as an online dating authority. We asked her to put her expertise to work by giving us three great tips for online dating.

1. Respond to Every Message

To start, you should try to respond to every message. Even those that contain only a greeting should get some sort of response. “I know it sucks, because, what do you say to ‘Hi’? You should still respond to it.”

According to CatLady, many sites use algorithms that measure your response rate. If the site marks you as someone who doesn’t reply very often, your chance of receiving a message will significantly decrease. “People will think ‘Why bother? She’s not going to respond.'”

Of course, don’t forget to be polite. You never know who might be a blogger, happily reposting your rude response for the online world to mock.

This one hadn’t really occurred to me before CatLady suggested it, but it made perfect sense when she explained: change up your profile, regularly. “You should update your profile all the time,” CatLady said. “Like, constantly. Put up a new picture, reword some things — anything to keep it fresh.”

CatLady describes marketing your profile as being much like selling a product. “Online dating is like a business, where you’re promoting yourself.”

One of the (many) hazards of online dating can be the tendency to keep things online, indefinitely. It’s too easy to get stuck in a pattern of simply sending messages back and forth, without ever making a deeper connection. This usually goes on until one of the parties gives up or loses interest, and breaks off the budding relationship without ever really seeing if it can be kindled.

It’s also very difficult to really get a feel for compatibility from emails or messages. Getting out into the real world can let you know if the match has any romantic potential. CatLady advises taking things offline as soon as you feel comfortable.

CatLady tip: Dinners can be long. Have coffee first.

“If you find them attractive, and you don’t feel unsafe, go and have coffee.” Notice she recommends coffee and not a meal. The average dinner date can last for hours — which can feel even longer when it’s immediately obviously there is no chemistry.

“I’ve had many bad dinner experiences with brand new people,” CatLady explained. “Have coffee first, then do dinner.”

Meeting for coffee or drinks is an easier way to test your compatibility. If the shorter meeting goes well, you’ll know it will be worth committing your evening to a longer date.

As with my infamously happy friend, CatLady has found a way to maintain a vibrant sense of humor in the face of some of life’s adversities. Her posts and podcasts inspire us all to be a little less angry and a little more amused.

While she has yet to find the partner to save her from her feline fate, CatLady still lives in hope. Meanwhile, she has a few plans in mind, including adding a whole new dimension to her online profile. “I’m going to make a dating video of myself,” she revealed. After seeing a profile containing a video link, she fell in lust with the idea. “I thought it was a little cheesy but a great idea.”

CatLady also has high hopes that she’ll find the time to put together that book she’s always been contemplating. “I have a couple of ideas,” she said, adding, “I really just need to sit down and do it.”

Whatever she next attempts, there is no doubt she’ll do so with great humor. Here’s to the continued adventures of Soon2BeCatLady.