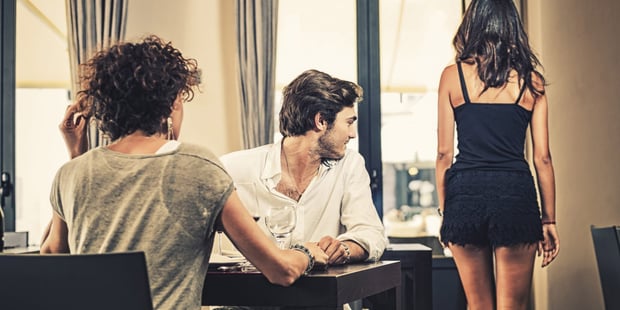 Ever since I wrote the book “The Perils of Cyber-Dating: Confessions of a Hopeful Romantic Looking for Love Online,” singles have been writing in to share their worst online dating stories with other online daters.

While I know finding your one in 40 million can be challenging, it’s time to laugh out loud while reading these hilarious stories.

Here are three stories of online dates that went bad.

While on a meet and greet (i.e., a dating “interview” with a man she met online), a woman was asked the following question, “How open-minded are you?”

She responded by telling him he should feel comfortable telling her anything. However, she wasn’t prepared at all for his response.

Her date then shared with her that he was wearing a diaper.

The woman asked if it was for medical reasons, but he said, “No.” As they were taking a walk on the beach and he was the one who was driving, she really couldn’t get out of the date at the time.

He was a good-looking man and was a top executive at his company. Although he was genuinely a nice guy, she simply couldn’t get over this particular quirk of his, so the relationship actually ended before it even started. It was another dating disaster.

Do you believe daters should be on a “need to know basis”? Did she really need to know this?

2. A Sneeze Isn’t Just a Sneeze

A woman met her online date at an upscale lounge in midtown Manhattan. It was a cold winter evening in the city, the kind that makes your nose run.

The two met outside and walked into a very nice establishment, where they sat down and got all settled in. After some small talk, suddenly her date reached for some napkins and began to blow his nose at the table. When he was done blowing his nose, he took his used tissues and just threw them on the floor.

He then turned to his date, as if what he had just done was totally normal, and asked, “Would you like anything to drink?”

All she could think was… CHECK PLEASE!!!! Needless to say, she never saw him again.

A single woman with a hefty appetite was looking forward to her dinner date with a man she was meeting for the first time. She was prompt and enthusiastic about her online date.

Unfortunately he was running late and didn’t call the restaurant. After waiting for 30 minutes, he finally arrived with no apology for his tardiness.

Naturally a first date can be awkward, so they talked about the subject of dating in general, while he simultaneously was staring around the room to check out other women.

He told his date he found it difficult to date in Los Angeles and added he hadn’t met anyone he was remotely interested in. Of course, that included her.

When the conversation moved to discussions of the nearby neighborhoods, he looked down upon the area she resided in. He said it wasn’t his element. He thought it was too artsy. She was an artist. He already knew that.

Although he had ordered two main courses for their dinner, she asked him if he’d prefer they cut the dinner short and end the date early. He agreed to stay but kept flirting with the waitress while staring at other women throughout the course of their date. At the end of the meal, the check came. He told his date he’d like to split the bill 50/50, but he’d pay for the tip.

In the course of her dating life, she found him to be rude. He didn’t like art, didn’t like her and didn’t want to treat her to dinner, even though he had asked her out.

So what do you think? Are these the worst online dating stories you’ve ever heard? If not, share your stories with us in the comments!

Guys, This Simple Mistake Can Make You Lose Online Dates

Serious or Serial Online Dater? How Many People You Should Date at Once

The Best Ways to Meet Your Online Dates Offline