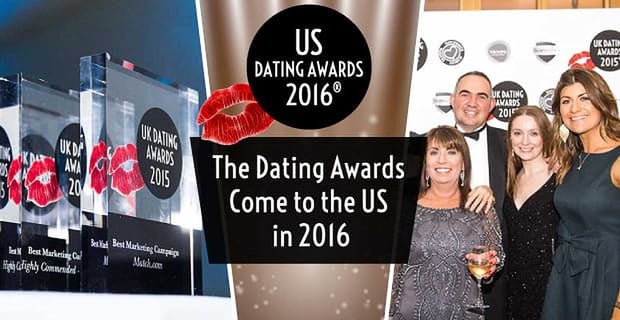 The Short Version: Singles today are never truly alone because they have the resources and support of an entire industry dedicated to advising, encouraging, and matchmaking. Charly Lester, Founder and CEO of The Dating Awards, thought it only right to recognize and celebrate the achievements of these wingmen and counselors. She created the UK Dating Awards to point out the best dating apps, websites, blogs, services, coaches, and matchmakers in the area. This annual event brings the dating industry together to mingle, network, and celebrate each other. Due to their incredible popularity, The Dating Awards have expanded across the pond, coming to New York City in 2016.

In the summer of 2013, Charly Lester was single, and she wanted to give herself a fun challenge: go on 30 blind dates before her 30th birthday. As she worked toward this goal, she blogged about the hilarity and horror of her dating experiences. From Date One: The Henley Boy to Date 30: The Hollywood Actor, her adventures turned quite a few heads.

Charly’s 30 Dates Blog attracted readers because of its wry sense of humor, relatable voice, and sage dating advice. “It went viral very quickly,” she recalled, “and led to a full-time career in dating.”

Charly Lester, Founder and CEO of The Dating Awards, got her start in the dating industry as a blogger.

From there, she dove into the dating industry, passionate about helping singles find the tools they need to get a date. “I started in this industry as a dater,” she said, “so I understand the pressures of being single in 2016.”

As her blog took off, Charly soon found herself being looked to as a dating authority. Singles would send her email upon email asking for advice. What dating app does she recommend? Does she know of any other good blogs about dating?

“I wanted to be able to give them a more definitive, democratic answer,” she explained. That’s when the idea of the UK Dating Awards popped into her head. She dreamed it up in April 2014, and by November of that year, she’d made the awards ceremony into a reality.

Today, Charly is the Founder and CEO of The Dating Awards, a prestigious annual event that recognizes expertise in the dating industry. Honoring dating websites, apps, services, and innovators, this awards ceremony soon expanded to an international stage — arriving in Holland in May 2016 and coming to the US in September 2016.

“The Awards are a celebration of the very best of the dating industry,” Charly told us. “It’s a great way to get positive stories about dating out into the media.”

Since their first event in 2014, the UK Dating Awards quickly became a beloved staple in the industry. From matchmakers to dating app designers, the ceremony attracts a rich representation of professionals who work hard to make life easier for singles. On the night of the Dating Awards, attendees can relax and socialize in a festive atmosphere.

Whether you’re a newcomer or a household name in the dating world, all are welcome to hobnob with dating icons and enjoy top-notch entertainment as the Awards are passed out.

“Every year the event gets bigger and better,” Charly said proudly. “We have a celebrity presenter, entertainment, and a little added extras including a beauty room, free taxis home, flames on the red carpet, and a comedian.”

This November in the UK, comedian James Veitch will be presenting the Awards — no doubt with a healthy dose of humor.

The Awards are judged by an independent panel of dating experts who hand out around 20 different awards, from Best Dating Writer to Dating Expert of the Year. The judges carefully consider the nominated company/person’s credentials, taking into account originality for content and ease of use of services. Some awards (such as Favorite Dating Site) are voted on by the public.

For a seal of approval, bragging rights, and an overall fun time, the Dating Awards put on a tremendously successful show for everyone in the dating industry.

Where Hundreds of Pros in the Dating Industry Mingle & Collaborate

In the UK, around 250 to 300 attendees come to the awards ceremony decked out in their finest apparel. Charly characterizes the night as “the Oscars of dating.” Many attendees look forward to the event as a way to network and collaborate with other leaders in the dating space.

“As a new company, the Awards provided a great way to get to know other people in the industry and to benchmark our concept and progress against others.” — Michael Kayenhoff, Marketing Director for The Inner Circle

Over the years, this event has grown and become a hub of up-and-coming dating experts. Charly told us that attendees tend to use the night as an opportunity to collaborate and form partnerships. As a networking venue, the Dating Awards can do some matchmaking of their own by bringing together so much talent in one place.

Those companies or individuals that win one of the coveted awards receive even more positive attention.

“In our experience,” Charly said, “the PR and marketing opportunities the Awards provide finalists and winners can be incredible.”

The 2016 US Dating Awards Will Also Include Daytime Workshops

No longer simply a UK tradition, the Dating Awards are currently branching out to the US When asked what prompted this exciting expansion, Charly explained that it was US companies in the dating space who approached her wondering if they could have a shot to get recognized by the Dating Awards.

Her answer: of course, they can!

The US Dating Awards will host the first ceremony on September 15, 2016 in Manhattan, New York. Sponsored by M14 Industries, Scamalytics, and ioSquare, these awards will give credit where credit is due to names big and small in the dating world. To those who make the trek out to the Big Apple, Charly told us that she’s planning something special.

“We’re combining the US Dating Awards with a daytime conference,” she said. “The conference will be a bit different — structured as a workshop with specific aspects tailored to different attendees.”

The Dating Awards will put on their first stateside awards show at the Prince George Ballroom.

The workshops will cover a variety of topics, from self-promotion to blogging strategies. Everyone from every corner of the industry can learn something here. Startups will have their own one-day accelerator workshop, while C-level employees are eligible for invite-only roundtable events.

A personal photo shoot for attendees will commemorate the workshop’s success. Then, when night falls, the trophies will come out to recognize the best American dating authorities and services.

Envelope, Please: The Event of the Year for Dating Movers & Shakers

In a few short years, Charly has come a long way from a 29-year-old single looking to challenge herself and make the most of her dating life. Now she helps other singles along by highlighting leaders in the dating industry. The Dating Awards serve as a stamp of approval, a metric of legitimacy, and a true point of pride for the winners.

The Awards give talented individuals and companies deserved recognition.

From startups to established brands, many dating professionals rub elbows at this yearly celebration.

It’s a night dedicated to promoting the people who influence the dating landscape for singles in a uniquely positive way. Whether in the UK, the US, or Europe, the Dating Awards seek out expertise.

This September, the US Dating Awards are sure to be a fabulous display of the best in the business. By bringing this tradition to the States, Charly hopes to reach even more singles with authoritative recommendations about the best dating services.

“The Awards are designed to be a mark of excellence,” she said, “which daters around the world have come to recognize and look out for.”