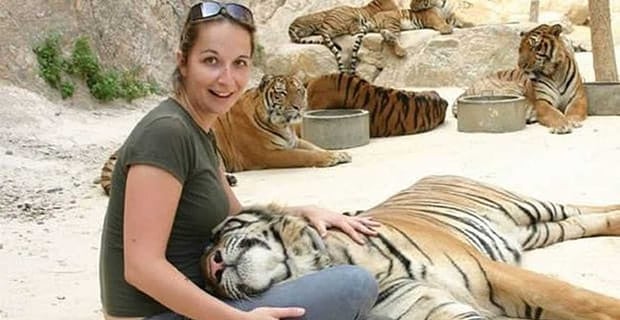 “I’m impressed at your ability to have tamed that tiger. What’s your secret?”

In 2009, I’d gone to Chiang Mai, Thailand with my sister and brother, and we happened upon a Tiger sanctuary with a menagerie of all kinds of exotic animals abound.

As part of your ticket entry, you were entitled to 15 minutes in the enclosure with either a cub, adolescent or adult Bengal tiger.

There were posters plastered all over the walls informing English speaking visitors their tigers were not drugged but were naturally sedated because they wanted for nothing – neither food nor exercise.

My sister and I joked if we were going to get in a cage with a tiger, we would prefer it drugged. Regardless, wide-eyed tourists were partaking and walking away unscathed.

I’d never had the desire to sit with a tiger, and I’m naturally absolutely risk averse.

My older brother, whom I’ve never seen back away from any sort of danger (man, beast, nature or otherwise), refused to use his ticket to sit with a tiger. My sister concurred.

Against my better judgment, I went into the large open space that held four to five adolescent tigers. I wish I hadn’t done it, but in that instance, the “When in Rome” mentality kicked in.

I chose the adolescent tiger simply because it had no wait. I handed my camera to its handler and asked him to take as many pictures he could as fast as he could.

He was obliging, but he must have had a penchant for Kodak moments, as he shook a long chain in front of the sleepy tiger’s face to get it alert and posing properly.

I sat stiff with my breath held and did my best attempt at a real-looking smile. I used less than 30 of the longest seconds of my life to get that shot. The picture was all that mattered, and I’d gotten it.

I escaped the experience unharmed, and I considered that a victory. My brush with the wild creature felt exhilarating, even post-Thailand.

When you sit with an animal as beautiful as a tiger and live to tell the tale, you want to share it.

“The tiger trend caught fire faster than the

I posted it on my Facebook and dating profile

Man, did it work! I got a lot of messages.

More importantly, I got a message from a guy who ended up becoming a(n ex) boyfriend. He sent the above email admiring my fearlessness and asking how I tamed the tiger.

So I can claim an online dating success story directly to my trailblazing tiger picture.

I think a lot of people were expecting a similar result from their tiger experience. Unfortunately the tiger picture trend has caught fire faster than the Justin Bieber deportation movement.

What was once a novel and conversation-worthy photo has become old hat.

Seems every other person, especially guys, has one up now, as it has spawned sites devoted to the exploitation of people with their tiger travel photos. Once everyone (or seemingly everyone) is doing it, the luster begins to fade.

Now if you were painting the tiger’s toenails or maybe shaving it a mohawk, I think you could maintain traction from your photo.

While the tiger may be a style that has faded with the season, the point of the tiger picture lives on.

Doing something interesting in your photos is a great way to generate conversations. Conversations are the first notch to starting any relationship.

Keep changing out your photos and using unique and interesting experiences to catch a dater’s attention…hopefully ones that don’t cause potential bodily harm.

Death by Adjectives in Your Online Dating Profile

The Most Important Part of Contacting Women Online