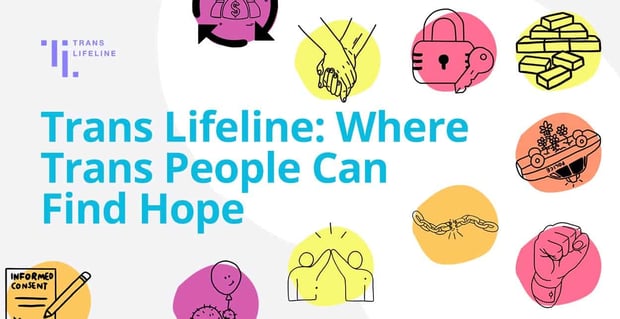 The Short Version: Since 2014, Trans Lifeline has championed the best interests of trans people and created supportive resources to ensure they don’t have to face personal challenges alone. Trans Lifeline runs a peer-to-peer hotline for trans folks in crisis, and it offers microgrants to assist with the bureaucratic process of changing one’s name or gender. During the COVID-19 pandemic, its daily support system has become more important than ever for trans singles grappling with economic uncertainty, social distancing anxiety, and other mental health challenges.

Many trans youth and trans adults struggle for survival in a normal year, let alone a pandemic year.

Trans Lifeline is a trans-led nonprofit that provides emotional support resources for trans people in crisis, and its team has recorded some troubling trends during the COVID-19 pandemic.

Trans Lifeline stands in support of trans people of all ages and backgrounds.

The good news is help is available thanks to the Trans Lifeline Hotline. Trans people in the U.S. can call (877) 565-8860 to speak to a trained crisis counselor who also identifies as transgender or nonbinary. For Canadian trans people, the hotline number is (877) 330-6366.

From the beginning, the Trans Lifeline hotline has been run by trans people for trans people. The nonprofit organization has a small office in Oakland, California, but its team members are accustomed to working remotely, so the pandemic has not slowed them down one bit. In fact, the troubling climate has only motivated greater expansion and growth.

“We’ve responded to the pandemic by offering more robust staffing on the Hotline and by making our Hotline available in Spanish as well,” the team told us.

Radical Community Care is Just a Phone Call Away

Trans Lifeline launched shortly after Trans Remembrance Day in 2014. Its founding mission was to provide peer-to-peer support for trans people in crisis. The organization has since trained over 600 hotline operators and answered over 106,000 calls for help.

The Hotline is available 24/7 to anyone who is questioning their identity or going through a personal crisis. It doesn’t have to be a life-threatening issue. The operators are open to conversations about any topic impacting a trans or questioning person’s mental health.

Whether they’re worried about coming out or fearful of using dating apps, it can help a single person feeling lonely to talk to a compassionate stranger who has been through similar experiences.

If you are not trans but have a friend or family member who is, you can call the Friends and Family Hotline to ask your questions, talk through your concerns, and come up with strategies to support your loved one.

“Growing up in a conservative Muslim, South-Asian country was terrifying, and self-acceptance was an uphill journey,” said a communications intern named Max, who was born and raised in Pakistan. “My summer internship at Trans Lifeline showed me the power that peer support and community can have in turning a trans person’s life around.“

As a nonprofit, Trans Lifeline relies on donations and volunteers to power its helpful programs and initiatives.

In 2018, Trans Lifeline began offering microgrants to financially assist trans people struggling to make ends meet. To date, Trans Lifeline has dispersed more than $738,000 in funds. Most of that money went toward the fines for ID changes, but nearly $103,000 was provided to pay the bail or legal fees of incarcerated trans people.

“None of us are free until we’re all free,” the Trans Lifeline team said in a Facebook post. “Trans liberation means we will not rest until all trans people are able to access the self determination, ease, and freedom from policing we all deserve.”

Trans Lifeline is committed to giving a voice to underprivileged and disenfranchised groups in the LGBTQ+ community.

In 2020, the Trans Lifeline team revised its microgrants program to ensure that 75% of all grants go to trans people who identify as Black, Indigenous, and/or People of Color.

Trans Lifeline can offer resources of relief to single people in marginalized communities. The trans-led group’s microgrants programs can walk individuals through how to change their names and gender identities on IDs in all 50 states. And the crisis hotline is equipped to fields calls from a growing cross-section of people.

“I love it when I have the privilege of being the first trans person a caller has spoken to,” said Veronica, who volunteers her time as a Trans Lifeline Call Operator. “I want to give trans people the tools to find and build community in their own area.”

This tumultuous year has shined a light on the need for mental health services in marginalized communities.

As of July 2020, Trans Lifeline has launched a Spanish Extension on the Hotline where Spanish-speaking individuals can voice their concerns or issues in their own native language. This is the first hotline of its kind in the U.S. It was built by trans Spanish speakers on behalf of trans Spanish speakers, and it has gotten an overwhelmingly positive response.

“As a result, we’re currently thinking about adding a number for Puerto Rico and Mexico as well,” the Trans Lifeline team told us.

In addition to its hotline, Trans Lifeline publishes helpful self-care tools to uplift people in difficult situations. Such resources can be vital to coping with life under lockdown, especially for single trans people who are isolated from friends or family members.

“No matter what, the work of caring and fighting continues,” the Trans Lifeline team promised. “We’re in this for the long haul, and we’re in it together! Don’t hesitate to call us if you need someone to talk to.”

Transgender people have to face many emotional, relational, and logistical challenges on their journey to live openly as the most authentic version of themselves. Trans Lifeline is run by trans people who can empathize with the range of experiences and emotions involved in coming out and being out as a transgender single.

From the 24/7 hotline to the microgrants program, Trans Lifeline continually lends a helping hand to people in crisis and advocates on behalf of members of the trans community.

While 2020 hasn’t been easy for anyone, it has hit the trans community particularly hard, so Trans Lifeline is committed to redoubling its efforts to reach out to individuals, uplift communities, and show trans singles that they are not alone.

“The next year is all about deepening the work we’re already doing,” the Trans Lifeline team said. “That means adding more expertise on our hotline about Domestic and Intimate Partner Violence, it means looking at new ways to distribute resources to trans people, and it may mean the creation of dedicated numbers for Puerto Rico and Mexico.”