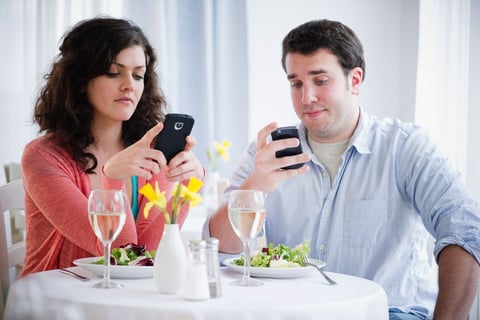 Why Does He Only Text Between Dates?

This reader question came to us from Mel in Minnesota:

“I met this guy online, and we have been on three dates so far. He doesn’t converse with me in between dates. He only texts to set up the date. When we are together, there’s chemistry, but I’m not sure if he’s REALLY interested. We have only kissed. Is he interested or passing time until he finds someone better?”

A common dilemma most women face

Many women go on dates with men where everything seems great when they are together, but when the second date ends, the chemistry outside of the date is no longer there.

If a guy is truly into you, he will usually make an effort to communicate with you in between dates, regardless of how busy he may be. Why? Because a man who is truly into you will want to talk to you when he is not around you.

There are no excuses for not communicating, regardless of how busy a man is with work and other obligations. These days just about everybody with a breathing pulse has his or her phone near them at all times.

Perhaps he doesn’t have the time to make a long phone call or prefers not to talk on the phone (which is very common these days and not a bad sign), but everybody has the time to shoot someone a few text messages here and there. It’s an extremely low-effort task.

When a man only texts to set up a date, he is treating the process more like a business transaction than a romantic engagement.

A guy should not be contacting you between dates like a business manager, merely making sure the logistics work and then disappearing. He should be flirting, asking how your week has been and engaging you with his charm.

The lack of effort likely means he just doesn’t care that much. This is usually a common characteristic of men who are setting up multiple dates per week or men who are unsure of whether or not they are truly feeling the other person.

The bare minimum to keep the courtship going will be taken care of (arranging the dates), but if the woman happens to fall off, he probably won’t think twice about it.

If he truly cared, he’d put in the effort to make sure the other woman didn’t lose interest.

What you should do

At the end of the day, though, even if he does truly like you, you have to ask yourself the question of whether or not this is this really the type of man you want to be with.

What fun is a guy you have good chemistry with on dates if he lets the momentum completely fade and abandons you the second it’s over for a week or two at a time?

I say take a hard pass on this one!

Joshua Pompey is an online dating and relationship expert, helping men and women succeed at online dating since 2009 and with a success rate of more than 99%.