We’ve all heard the expression, “Rome wasn’t built in a day.” In general, things that are worth it take time.

So why do you think Prince Charming (or Princess Charming?) will simply come knocking on your door at exactly the moment you’re looking for someone?

It’s true Rome wasn’t built in a day but neither was the process of finding the right partner.

Many people sign up for an online dating site or go to a speed dating event expecting to find their “one and only” simply by signing up or logging in.

Unfortunately, it’s not that easy and it will take some time.

Put some work into it.

As with most things in life that you want badly enough, you’ll have to put some work into it. But don’t worry — all the effort isn’t for naught.

I was on and off JDate for years. It got me a few relationships here and there, but it took a lot of time to meet the right person.

“Would you give up a job search after

a month if you really needed a job?”

For example, one short JDate relationship years ago taught me that even if a guy says he’s romantic, it doesn’t mean he necessarily is.

That is, unless you call romantic being in bed at 10 p.m. every night without even making an exception for a casual game of Scrabble. Yes, we broke up over his refusal to stay up “late” to play Scrabble with me, among other things.

I was just so eager to be in a relationship that I overlooked it for a while. And JDate certainly gave me my fair share of awkward yet laughable experiences.

There was the time I went on a date with a guy who said to me, “I have something to tell you.” You just met me – what could you possibly have to tell me?!

Give yourself a fair chance.

For the people I give “A Little Nudge” to, I don’t let them quit online dating after just one month. It’s not giving yourself a fair chance.

Even in 2013, people are still warming up to the whole concept of online dating, so maybe they just need time to get acclimated to the scene.

Would you give up a job search after a month if you really needed a job? That’s what I thought.

As Carrie from “Sex and the City” (one of my favorite shows) once said, “People go to casinos for the same reason they go on blind dates — hoping to hit the jackpot. But mostly you just wind up broke or alone in a bar.”

Love is out there, but it just takes some good ol’ time to find it. You might as well have fun with the process!

Have you ever felt like giving up on online dating? What was the most frustrating part? 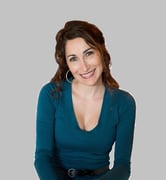 Erika Ettin is the founder of A Little Nudge, where she helps people navigate the world of online dating. Her services include: writing unique profiles to get you noticed, helping choose your best profile pictures, writing one-of-a-kind emails to get someone’s attention and planning dates. A Little Nudge has recently been featured in The Washington Post, NPR, Talk Philly, JMag (JDate's online magazine) and Ask Men.