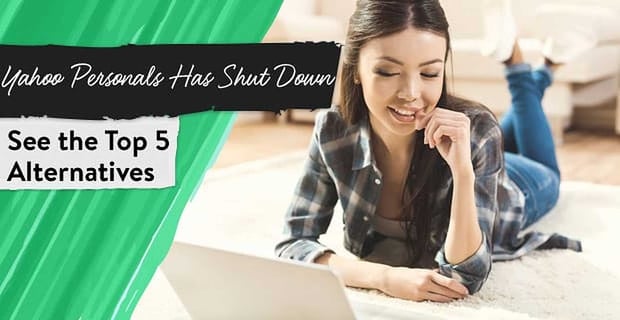 Yahoo Personals Has Shut Down: See the Top 5 Alternatives

Yahoo! was founded in 1994 and quickly became an incredibly popular website directory, search engine, web portal, and email and instant messaging service. The company has since entered several other markets, including news, sports, finance, and online dating personals.

Yahoo! Personals was the company’s paid dating service, and it had more than 10 million members and 13 different international subdomains. Unfortunately, it no longer exists.

In 2010, Yahoo! Personals merged with Match.com (more on that below), but many people still reach out to us asking about Yahoo! Personals. We thought we’d fill in the missing pieces today and present you with five other dating sites that are even better than Yahoo! Personals was.

There’s a reason Yahoo! Personals merged with Match — it’s the world’s premier dating site. Launched in 1995, Match was the first online dating service to ever exist, and it has remained at the top of the heap ever since. Match has 30 million+ members and has led to more first dates, second dates, relationships, and marriages than any of its competitors. Plus, did we mention it’s free to register, upload pictures, search through members, view profiles, receive matches, and communicate via likes and limited messages?

Elite Singles caters to college-educated, commitment-oriented singles who want to meet their peers. More than 80% of its users have at least a bachelor’s degree, and 90% of them are looking for a long-term relationship. A majority of Elite Singles users are also at least 30 years old, so you definitely won’t be around the hookup crowd here. The site has reputation on its side as well — over 2,500 people find love on Elite Singles every month.

Created in 2007, Zoosk was among the first dating sites to integrate with social media networks, like Facebook and Google+, allowing for even faster sign-up. More than 40 million people have joined Zoosk, and more than 30 million have downloaded it via the App Store and Google Play. This is an active bunch as well — Zoosk members exchange more than 3 million messages a day on the site. Unlike with Yahoo+ Personals, you can leave your wallet right where it is because Zoosk doesn’t charge for any of the basic features, including the Carousel, SmartPick, and Insights.

Dr. Neil Clark Warren, a clinical psychologist, Christian theologian, and seminary professor, co-founded eharmony in 2000, and now it’s responsible for 4% of marriages in the United States. Exclusively for marriage-minded heterosexual daters, eharmony offers its very own 29 Dimensions of Compatibility Questionnaire to match its users. Thanks to this intelligent match formula, you won’t have to do any of the searching — eharmony will use your answers to bring the most compatible people to you. All you have to do is say yes or no.

For those looking for a hookup instead of a date or relationship, BeNaughty is a great alternative to the adult section of Yahoo! Personals. The site takes your location, age, and interests into consideration when pairing you with frisky singles. BeNaughty also uses SSL encryption technology and a profile verification system to ensure your information is protected and every member is a real-life person.

Yahoo! Personals May Be Gone, But You’re Still In Good Hands!

Yahoo! Personals did a lot of wonderful things for a lot of singles, but it wasn’t really able to keep up with the dating sites of today, especially Match. The dating industry may have lost a personals dating service in 2010, but you’re still in good hands and can meet people online through a number of ways. You’ve got plenty of awesome sites to turn to, including the five we just told you about. Now, Godspeed!