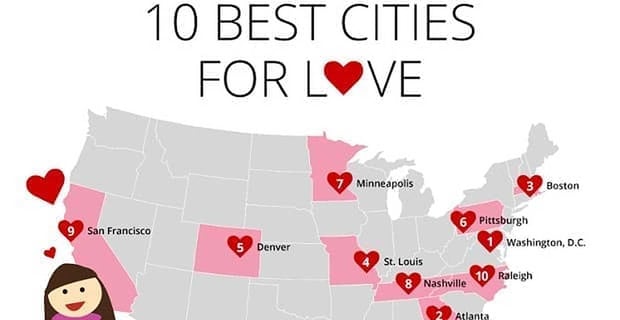 The real estate gurus at Zillow released their data on the top cities for singles. The data is interesting, and their team of researchers compiled data on four points:

The 10 best cities consist of:

The full list and data can be viewed on Zillow.com.

Before anyone considers packing up the SUV and moving to Washington, D.C., let’s take a closer look at the data and see what is really behind these top cities.

Taking a closer look at the data brings up some interesting points. Disposable income reveals a lot about the cities. Again disposable income is the yearly sum of available money after rent is subtracted.

Both cities are priced outrageously high, and according to a 2014 report, residents of San Francisco spend about 40.7 percent of their income just on rent. Compare that to the highest ranked city for singles, Washington, D.C., which only spends 27.2 percent on rent.

Coincidently, the District also has highest median disposable income at $25,915.

What to do with all that disposable income?

What good is disposable income if there isn’t anywhere to spend that hard-earned cash? Being single usually means going out and enjoying life — music venues, movies, food and drinks.

If variety is the spice of life, those cities are lacking a bit in the spice department.

What factors make your best city?

Beyond potential date spots per capita and disposable income, what other factors contribute to making your best city for being single?

For me, I would have to consider weather. While Atlanta, Georgia is ranked second, it is far too hot and humid in the summer months for me. On the opposite end of the weather spectrum is the seventh ranked city, Minneapolis, where it seems too cold to do anything but stay indoors all winter long.

Since I’ve never been to Atlanta or Minneapolis, I could be totally wrong about them — let me know in the comments. Or if you think your city deserves to be ranked as one the best cities for singles, tell me why.

James Daugherty is from Seattle, Washington. He researches real estate data and writes about everything real estate related for the largest real estate network, Zillow. When he’s not crunching data, you can find him in the mountain or on his bicycle.

11% of American Adults are Online Daters