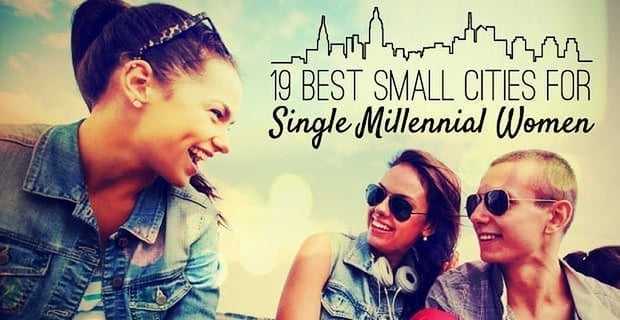 Being a single millennial woman in a big city isn’t all it’s cracked up to be. With populations growing every day, finding decent single men becomes more like shooting fish in an ocean rather than a barrel.

Using Jonathan Soma’s 2013 Interactive Singles Map, we found the 19 Best Small Cities for Single Millennial Women. Not only does each city have a population of less than 100,000, making it easier to meet high-quality men, but each city also has tons of cool date ideas, which we’ve listed below.

We start off our list with Cheyenne, Wyoming, which is also called “The Magic City of the Plains.” Whether you go horseback riding, visit a farmers market or soak in some culture at one of the art galleries, you’re almost guaranteed to meet a suitable guy, particularly since there are 1,385 more single men than single women.

What to do: Terry Bison Ranch, Cheyenne Botanic Gardens and Cheyenne Depot Museum

Where to eat: The Albany, 2 Bar Bowl and Old Chicago Pizza and Taproom

Winter, spring, summer or fall — Ithaca, New York is a marvelous city all year-round, especially when you take into consideration the fact that there are two colleges right there, the Finger Lakes are nearby and the number of single men beats out the number of single women by 1,419.

What to do: August Moon Spa, Bellwether Hard Cider and Johnson Museum of Art

Where to eat: Ithaca Bakery, Just a Taste and Maxie’s Supper Club and Oyster Bar

Not only does Mount Vernon, Washington have the annual Tulip Festival Street Fair, but it also has 1,560 more single men than women. Enjoy the ideal weather while also enjoying some ideal dates!

What to do: Lincoln Theatre and Carpenter Creek Winery

Where to eat: Kelly’s BBQ, Il Granaio and Big Rock Roadhouse and Pizzeria

Found in the middle of South Carolina, Sumter offers single millennial women plenty of things to do, including festivals, gardens and sports, not to mention 1,648 extra single men for the taking!

What to do: The O’Donnell House, Palmetto Tennis Center and Sumter Art Gallery

Where to eat: Hamptons, Serendipity Caterers and Duncan Dogs

With the saying “The Discovery Continues,” the dating discovery truly does continue in Missoula, Montana. If that view below doesn’t convince you, maybe the fact that the guys outnumber the ladies by 1,702 will.

What to do: Fort Missoula Museum and Missoula Art Museum

Where to eat: Caffe Dolce and Good Food Store

Wenatchee, Washington has a reputation of having the best apples around, but what also boasts its stellar reputation is the vast amount of single men — 1,732 more than single women!

What to do: Grizzly Lounge, Ohme Gardens and Pybus Market

Where to eat: McGlinn’s, Visconti’s and Tastebuds Coffee and Wine

We can’t talk about Sheboygan, Wisconsin without discussing its honorary titles of “The Bratwurst Capital of the World” and “The City of Cheese,” but we also can’t talk about this wonderful city without talking about how perfect it is for single women. Ladies, 1,793 extra single men are waiting for you!

What to do: Bookworm Gardens, Kohler-Andrae State Park and Sheboygan Visual Artists

Where to eat: Field To Fork Cafe, Il Ritrovo and Weimann’s

Located on the East Coast of Georgia lies Hinesville, a city known for being the home of three signatories of the Declaration of Independence (Lyman Hall, George Walton and Button Gwinnett), but now it will also be known as the #12 best small city for single millennial women thanks to 1,972 more single men.

What to do: National Museum of the Mighty Eighth Air Force and Fort Morris Historic Site

Where to eat: Rodeo Mexican Restaurant and Shane’s Rib Shack

What to do: Allen County Museum, Westgate Lanes and Lion and Lamb Arts Center

Where to eat: Meeting Place On Market and Old Barn Out Back

“The Place to Come for Good Times” is also the place to come for good dates. Ladies, did you know there are 2,115 more available men than women in San Angelo, Texas? Well, we did, which is why we put it as #10 on our list!

What to do: San Angelo Museum of Fine Arts, Fort Concho and San Angelo State Park

Where to eat: Twin Peaks, Dickey’s and Logan’s Roadhouse

Where to eat: Country Kitchen Restaurants and Sam’s Southern Eatery

Home to the Seymour Johnson Air Force Base, Goldsboro, North Carolina is also home to 2,221 more single guys than gals. Don’t let those suitors slip through your fingers! “Be more. Do more. Seymour” when you’re in this quaint city.

What to do: Wayne County Historical Museum, Paramount Theatre and AMF Bowling

Nestled close to the center of Pennsylvania is Williamsport, and nestled in Williamsport is an extra 2,295 single men who are looking for someone to call their own. That someone could be you, especially if you love baseball.

What to do: Community Arts Center, Bastress Mountain Winery and Reptiland

Don’t let the “City of Subdued Excitement” nickname fool you. Bellingham, Washington is perfect for single women who love the outdoors and love being outnumbered by single men — 2,307 to be exact. You can also shop for artwork that’s painted by elephants! If that doesn’t make for the perfect first date story, we don’t know what does.

What to do: Masquerade Wines, North Cascades Institute and Idiom Theater

Known as “E-town” to locals, Elizabethtown, Kentucky is a gold mine for single women thanks to there being 2,582 more single men. Plus there was a romantic Orlando Bloom movie named after the city, so it’s legit in our book.

What to do: The State Theater, Hardin County History Museum and Swope’s Cars of Yesteryear

When they say “come for a visit, stay for life” in Cumberland, Maryland, they mean it. How could a single gal not fall for a charming city like this? Not to mention the fact that there are 2,592 more single guys and it’s a history buff’s dream come true.

What to do: Great Allegheny Passage, Scenic Western Maryland Railroad and Canal Place

Nicknamed “The Grand Cities,” “The Forks” and “The Sunflake City,” single men in Grand Forks, North Dakota outnumber single women by 3,671, and we like those odds. Take your single status from present to nonexistent with the variety of date options you’ll find here!

What to do: Empire Arts Center, Alerus Center and Grand Forks Country Club

Where to eat: Green Mill, The Blue Moose and Red Pepper

Michigan City’s motto may be “Shops; Sand; Smiles,” but perhaps that motto should include “4,104,” the amount of single men compared to single women.

From museums and parks, to concerts and casinos, Michigan City, Indiana is a single woman’s paradise!

Where to eat: Water’s Edge, Shoreline Brewery and Hacienda Fiesta

With 5,057 more single men than women, Lawton, Oklahoma takes the #1 spot on our list of the 19 Best Small Cities for Single Millennial Women.

Located in the center of what’s called Tornado Alley, this amazing small city will whip up a storm of potential suitors in no time!