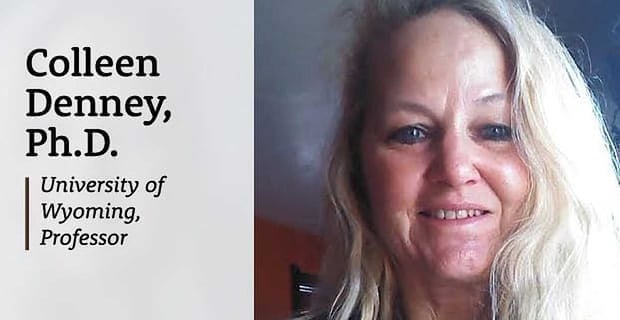 The 411: As a true anglophile, Dr. Colleen Denney uses her love of all things British to examine how women used, and still do to this day, art and culture to present who they are to the world.

Dr. Colleen Denney may be going on her 26th year at the University of Wyoming, but she’s always had a passion for British culture, particularly how artistic women in the Victorian period received their training, how they showed their work (if their work was shown at all) and the issues they faced.

That passion grew even more while Denney worked on her dissertation about Lady Caroline Blanche Elizabeth Lindsay, a Jewish artist who was married to Sir Coutts Lindsay, a mixed marriage at the time, and with whom she co-directed the Grosvenor Gallery.

“I was totally fascinated by her story and what a strong woman she was,” she said. “That sort of launched me into all of this, and at that time, no one was teaching things like the history of women’s art classes, which I teach now. Women’s studies programs were in their infancy.”

Now Denney delves deeper into this topic through her work, including her popular book “Women, Portraiture and the Crisis of Identity in Victorian England: My Lady Scandalous Reconsidered,” a collection of case studies that examine four famous Victorian women who were all scandalous in some way and the costs that fame had on them.

Representations of women then and now

Denney’s inspiration for her 2009 book came from her 2005 book, “Representing Diana, Princess of Wales: Cultural Memory and Fairy Tales Revisited,” which looks at the Victorian construction of womanhood and how those constructions continue to be imposed on “royal” women today.

While writing this book, Denney saw a portrait of Lady Dilke, who was dressed to perfection in a corseted evening gown and affectionately looking at the viewer, but she knew there was more to her than what she saw.

Denney’s book examines famous, scandalous Victorian women and the costs that fame had on them.

“I knew she had been in love with this man who was destined to be the next prime minister, and they were secretly engaged. He was named as a co-respondent in a divorce case, and his career was essentially over,” she said. “She spent 10 years trying to resurrect his political career, and she was tainted by association.”

Denney included a chapter about Lady Dilke’s scandal in her book about Diana, comparing how she was treated then to how Hillary Rodham Clinton was treated during the Monica Lewinsky scandal.

In turn, this chapter inspired Denney to dedicate an entire book to the stories and portraits of Lady Dilke and Victorian women just like her, including Mary Elizabeth Braddon, Millicent Garrett Fawcett and Sarah Grand.

“I used those portraits because those are really the most public pieces we have about these women, and I examined them in relationship to the scandals these women went through. Were these portraits really kind of damage control for them?” she said. “In all of these cases, I talk about that as being one of the main pieces in terms of how we interpret those portraits, so the crisis is the crisis that they’ve gone through.”

Denney added that the big takeaway from this book, as well as her work overall, is that we can relate to these women and men more than we think we can.

“Traditionally we talk about the Victorian period as being very black and white, as men and women living in very separate spheres, so women in the domestic sphere and men in the public sphere, and we know that’s not a stable way to talk about the time period,” she said. “Things are much more messy than we would like them to be or than we originally understood them to be. These people’s lives were just as rich and just as complicated as ours are today.”

Connecting the past and the future

From speaking about women and body image at student events to writing two books, one about “the visual culture of women’s activism in England and France and the other about a 19th century woman pharmacist and her 21st century counterpart,” Denney is staying busy.

“I’m wanting more and more to be able to connect my research on activist history to real activism in the world so I can give my students opportunities to do community work … to get them engaged in their own history so that they can see what’s really going on in the world right now is their history — that they’re making history,” she said.

Denney is an art historian who teaches courses on the feminist visual culture of modern and contemporary art, Victorian women’s art, literature and culture and the history of women artists.

But what always remains at the forefront is showing people how women are represented, what it was like in the past, what it’s like now, how it hasn’t changed much and how we can combat that.

“It continues to be a big part of our dialogue about women in our culture and how they’re judged and how we need to change that,” she said. “Even though my work is in the Victorian period, I always try to connect it to the dialogues that are going on today. We need to be really aware of traditional concepts and expectations of our bodies and how we position them in our cultures and how we can change that conversation.”

To learn more about Dr. Colleen Denney and her work, visit www.uwyo.edu. You can also purchase her books on Amazon.