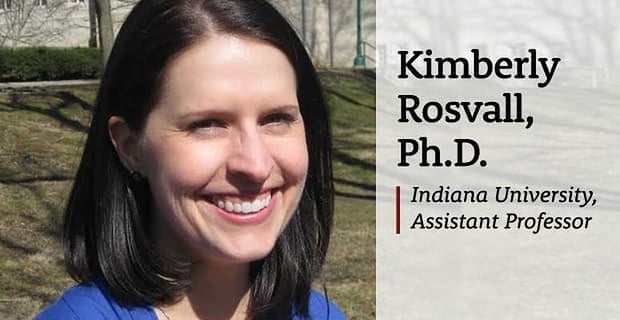 Dr. Kimberly Rosvall: The Pros and Cons of Aggression in Female Birds

The 411: With a Ph.D. in biology, Dr. Kimberly Rosvall is a go-to expert in the field of animal behavior, particularly when it comes to physiology, ecology and evolution.

As a young girl growing up, Kimberly Rosvall always loved exploring the outdoors and learning more about nature, but she never knew she could make a satisfying career out of her adventures until college, when she decided to become a biologist.

Now as an assistant professor at Indiana University, Rosvall gets to wear many different hats while she lives out her passion of studying why and how animals behave the way they do.

“I approach this question using a lot of different sub-fields of biology — genomics, endocrinology, evolution, ecology,” she said. “My work is integrating these multiple, different perspectives and different tools to figure out why an animal has this type of behavior or that type of behavior and to figure out how that manifests inside the animal in terms of what’s going on with its hormones and its brain and the genes that it is expressing inside its body.”

For this article, we’ll discuss Rosvall’s one-of-a-kind study about competition among female tree swallows, one of the most common migratory songbirds in North America, and the impact her work is making not only on the field of animal behavior but on society as a whole.

Rosvall has been studying tree swallows for the past 13 years, but in the paper “Life History Trade-Offs and the Evolution of Behavioral Sensitivity to Testosterone: An Experimental Test When Female Aggression and Maternal Care Co-Occur,” she set out to determine why some females are more aggressive than others when it comes to competing for a nesting site and what the costs of being an aggressive female are.

In order to do this, Rosvall examined free-living tree swallows in bird boxes she assembled in their natural habitat. She also gave some birds a tiny, relatively non-invasive silicone implant filled with testosterone, and the others simply received a placebo.

Like all female vertebrates, it is normal for female tree swallows to produce testosterone, but the females with the testosterone implants simply had testosterone levels that are on par with the highest levels found in females in nature.

Rosvall used testosterone implants to determine what the costs are of aggression for female birds.

She also found females that received testosterone neglected their motherly duties more so than those that received a placebo, including improperly incubating their eggs. During the daytime, while the average temperature in a controlled female’s nest was 38 degrees Celsius, the average temperature in a testosterone-implanted female’s nest was 10 degrees colder.

“This is really bad for the chicks developing inside those eggs,” Rosvall noted.

Rosvall said while these results may make aggression seem like an unfavorable behavior for Tree Swallows, there’s a time component to take into consideration.

“Females have to be aggressive in order to get a place to breed, and then they basically need to shut that off as much as they can and switch roles,” she said. “They need to be really hardcore and really aggressive at the beginning of the breeding season, and then they need to hunker down and take care of their chicks. High testosterone and high aggression can interfere with parental care.”

For the past two years, Rosvall has focused on follow-up work to this study, including examining how this behavioral shift happens, how a female can maximize aggressive behaviors when she’s competing for a nesting site and how she can minimize those behaviors as her role as a mother becomes more important.

“The thing I want the general public to know about studies like this is that competition in females in many species is a normal part of life, and females make testosterone, too,” she said. “Female competition is an important component of these birds’ lives and probably of a lot of other vertebrates’ lives as well.”

Rosvall is expanding her research to include experiments that look at how aggressive experiences affect individuals in the future in terms of behavior and physiology.

“We can learn things from studying birds that we can potentially apply to humans to solve problems.”

“In other words, does getting in a fight adaptively prime you for success in future fights, or does it have some kind of negative long-term effect that could bear out in other realms, like in parental care?” she asked. “The answer could be that both of those things apply — it could prepare you for success in an unstable future world where you need to be aggressive, but there could be trade-offs associated with that in terms of your ability to be a parent or take care of yourself.”

Rosvall is excited about the ways in which “how-type” questions might apply to humans.

“We can learn things from studying birds that we can potentially apply to other animals, including humans, to solve big societal problems. For example, what are the types of changes in hormone or gene regulation that we might expect to see in response to past violence or aggression, or what are the physiological effects of bullying?” she said. “Humans and birds are different in many ways, and other scientists would have to test those questions in humans to follow up on the work I’m doing. But birds and humans do have a lot of similarities in physiology, and research in my lab provides a first key step toward understanding how aggression is controlled and how aggression might affect animals in the long run.”

To learn more about Dr. Kimberly Rosvall and her work, visit www.indiana.edu/~krosvlab.