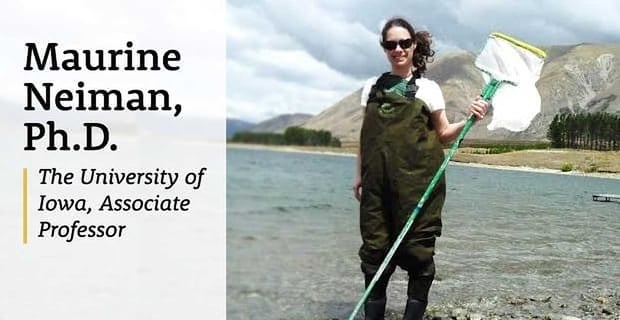 The 411: Dr. Maurine Neiman has been a biologist with the University of Iowa for seven years, and she’s already making a huge impact with her work, especially understanding and explaining the differences between sexual and asexual organisms.

Ever since she was a kid, Dr. Maurine Neiman has loved learning about animals and nature. She even dreamed of becoming a veterinarian or a jockey, but biology was her true calling.

She’s particularly interested in the ways sexual and asexual organisms are different from each other and how she can use those differences to better understand the costs and benefits associated with sexual reproduction and answer questions about that topic from an evolutionary standpoint.

Neiman was kind enough to take us through one of her papers in more detail and why it’s important to share her work with the public.

In the 2010 publication “Accelerated Mutation Accumulation in Asexual Lineages of a Freshwater Snail,” Neiman and her colleagues examined sexual and asexual freshwater snails from New Zealand.

The data they collected provide the first conclusive demonstration of mutation accumulation in an organism where asexual and sexual individuals coexist and compete and reveal that asexual snails had more of these harmful mutations in their genomes than sexual snails.

In the 2010 publication “Accelerated Mutation Accumulation in Asexual Lineages of a Freshwater Snail,” Neiman examined sexual and asexual freshwater snails from New Zealand.

“This result provides new evidence for a hypothesized benefit of sex that could help explain its overwhelming dominance in nature: that organisms need to use sex in order to produce offspring that are relatively free of harmful mutations,” she said.

What do snails have to do with you?

Through in-depth, diverse and broadly-oriented studies, Neiman has made tremendous impact on advancing the snail as a species to study sex, but she also wants people to see the similarities between snails and humans that are often quite meaningful.

“Whether people like thinking about this or not, we do share common ancestors with snails and all other animals,” Neiman said. “The snails, though, provide a mean of studying sex in a really powerful way that humans don’t have, in that the snails come in asexual forms, so we can compare these asexual snails to the sexual snails in order to figure out in a very direct way advantages and disadvantages associated with one way of producing offspring versus another.”

“We do share common ancestors with snails and all other animals,” Neiman said. Photo credit: Bart Zijlstra

Neiman is currently working on sequencing the genomes of the sexual and asexual snails. She’s also studying whether the asexual snails might suffer disproportionately from nutrient limitations in their New Zealand lake homes.

Much of her current and future work will also consist of getting people involved in her lab and science overall, including high school students, undergraduates and the community.

“I believe very strongly that, as scientists, we have responsibility to make sure we are able to explain clearly what we’re doing to the public and why it’s important, and we also believe that there is a lot we can do as scientists to give back in terms of mentoring, training and outreach,” she said.