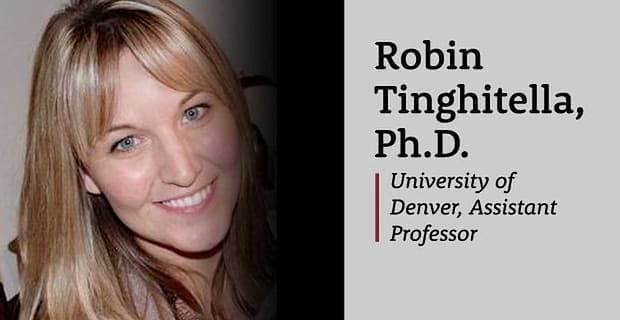 The 411: With her research featured in more than a dozen scholarly publications, Dr. Robin Tinghitella, a leading behavioral ecologist at the University of Denver, is just scratching the surface of her work on animal mate choice.

If you think you have nothing in common with a cricket when it comes to choosing someone to date, then you might want to think again.

Dr. Robin Tinghitella‘s work may focus on non-human animals, but that doesn’t mean us humans can’t learn a thing or two.

As a behavioral ecologist at the University of Denver, it’s Tinghitella’s job to look at communication between the sexes and the subtle signals animals use to attract and assess the quality of a mate.

“I think a lot about what the signals are that animals are using to communicate with mates and the selection pressures or constraints in their everyday lives that influence when and how they use those signals and what drives females to make certain mating decisions,” she said.

Tinghitella was kind enough to share the details of her latest study with me and break down how complex the mating behavior of animals like insects and fish can be.

What causes mate preferences to change?

In her study “Male and Female Crickets Modulate Their Courtship Behavior Depending on Female Experience with Mate Availability,” Tinghitella examined Acheta domesticus crickets to determine what causes variation in female mate preferences within a lifetime and under what conditions those preferences change.

“Courtship behavior of males and females was flexible depending on the number of mates females encountered earlier in life,” Tinghitella said.

Tinghitella breaks it down even further by saying mate preferences are much more flexible than we once thought, and there’s room for understanding how experience might interact with things like age to influence the decisions we make in choosing our mates.

“Mating decisions might change depending on various costs that individuals encounter in their lifetimes, whether that’s the cost of the time associated with searching for another mate or some external force like predators that is imposing a cost on signal production or the search for mates,” she said.

Explaining science to “people who don’t do science”

While she’s only in her third year at the University of Denver, ultimately Tinghitella sees her career progressing toward training colleagues to be science communicators and getting people excited about the magic that exists within the field.

“I think mate choice is a compelling field that is naturally attractive to a broad audience because we all do this, so we all have some opinion about it or some question about it,” she said. “In the long term, I would like to pursue avenues to share my work and the work of others to broad, non-specialist audiences. I think it’s a great way to introduce the process of science and the types of questions we can address.”

Dr. Robin Tinghitella studies interactions between the sexes in an attempt to understand the origin and maintenance of variation in sexual signaling and mate choice.

She also wants to encourage those who think they hate science to give studies like this a chance.

“We can’t make assumptions about how the patterns I’ve uncovered in animal mate choice are similar or different from human mate choice,” she said. “These things need to be tested, and there’s a lot more going on with our situation, but I think it’s certainly easy, and can be fun, to imagine the parallels.”

To learn more about Dr. Robin Tinghitella and her work, visit tinghitellalab.weebly.com.