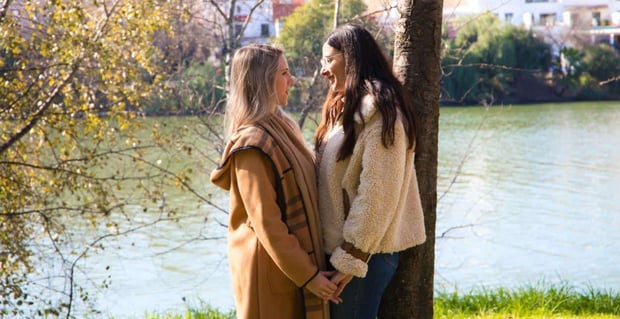 It’s odd to think the mutual affection of a couple holding hands could be broken down into which partner displays more control in the relationship, but a new study has done so.

However, the research, which was published in the Journal of Homosexuality, shows one type of couple may be immune to these type markers: lesbians.

In most couples, the height of the respective partners plays a clear role, prompting the taller half to typically take the overhand, or more dominant, grip.

Even among heterosexual couples when height variation is not seen as a factor, men most often take the more dominant position when holding hands with their partner.

Yet when researchers asked 340 women in same-sex couplings to demonstrate how they most comfortably hold hands with their partner, they found most were not driven by variables outside of their respective heights.

by variables outside of their heights.”

One exception, however, was lesbians who had previously dated a man. They were found less likely to take the dominant hand-holding position in the relationship.

Among other variables looked at by the study’s authors were age, income, region, the length of the relationship and the amount of time spent living together.

The couples participated in an online survey by displaying for researchers how they would most naturally and comfortably hold their partner’s hand.

Each participant was also asked to identify which partner was more of a decision-maker in the relationship. However, none of these parameters seemed to determine the results.

Study co-authors Alison Che and Richard Wassersug said respective height was the only other variable to effect the results, as it does with heterosexual couples. This is frequently seen as merely a function of biomechanics.

“Our results suggest that hand-holding position does not reflect a dominance or power differential between partners, at least within a female-female relationship,” the researchers wrote.