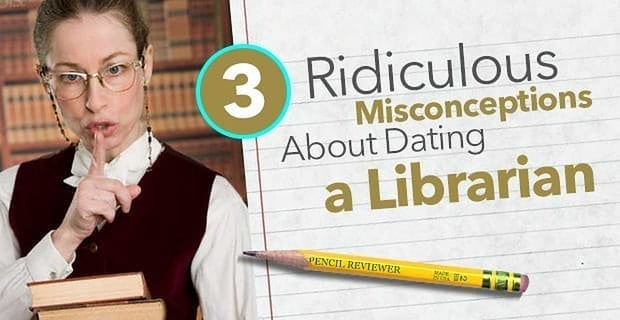 3 Ridiculous Misconceptions About Dating a Librarian

There’s more to librarians than the stereotypes that portray them as old women and men who stack books and shush loud teenagers all day. These keepers of books also have love lives just like you and me (go figure!)

To set the record straight, we’ve gathered THE experts in the field – four librarians who are masters of their craft, not to mention romance! They were kind enough to clear up three common misconceptions about dating a librarian, as well as give us the do’s and don’ts for hitting on one. You might want to take notes.

Take it from Holly Hibner, the adult services coordinator at the Plymouth District Library in Plymouth, Michigan – most librarians are passionate about reading, but they also have other interests (and no it’s not to just sit around and read.)

“There are librarians with specialties in art, history, music, technology, law… you name it! We became librarians to help others discover our (and their) passions, to do research and to teach people how to find and use information in a variety of formats,” said Hibner, who’s been in the field for 15 years. “Do people really think we read all day at work? If only!”

Linda Absher, an academic librarian at Portland State University and creator of LipstickLibrarian.com, agreed with Hibner but did warn that if you want to date a librarian, you might have to tolerate a correction (or two) every now and then.

“You have to be willing to put up with smartypants-ness,” she said.

“If you are dating a librarian, you can count on being ‘fact-checked’ and researched,” she said. “Librarians look up stuff for a living, so if you are in a relationship, you can absolutely count on being researched. You might want to make sure your online profile is up to snuff.”

Misconception #2: Librarians are old and grouchy

If the scene from “Monsters University” comes to mind when you think of librarians, you might want to try another movie.

According to Hibner and Kelly, who’ve been married for 18 and 33 years, respectively, librarians are as diverse as the books on the shelves, ranging in age, gender, race, religious preferences, political leanings, appearance and more.

“Right off the top of my head, I can think of so many people who are experts in things you wouldn’t expect,” she said. “Chances are, in my network of librarians, there is someone who is quite an expert in some bit of esoteric knowledge.”

Misconception #3: Librarians are sex kittens waiting to be unleashed

Having been in the profession for 20 years, as well as married for 29, Absher can attest that if you’re waiting for a librarian to whip off her glasses, toss her hair out of a bun and seductively rowr at you, you’ll be waiting a long time.

“It’s like we’re some package that needs to be unwrapped, and that is not the case,” she said. “Although I’d say if you’re out in the dating world, you can definitely leverage it to your advantage.”

Jessamyn West, a library specialist at Open Library, a project of the Internet Archive that lends ebooks worldwide for free, and founder of Librarian.net, said while there are plenty of sex-positive librarians out there, most aren’t “riffing off of some version of the Madonna/whore complex.”

But West, who has been with her partner for more than six years, also cares about the stereotypes that affect men in the profession.

“Librarianship has traditionally been a queer-friendly profession relative to many other professions,” she said. “This is great, but it can make it tough for straight ‘guybrarians’ to find dates because people jump to conclusions.”

So now that we’ve set you straight on the misconceptions, want to learn how to catch the librarian of your dreams? Here’s how:

“Most female librarians I know have been approached at work by guys looking for dates – sometimes cool; oftentimes creepy. Don’t mistake professionalism and friendliness for personal interest,” said West, who’s been on the job for 18 years. “Find ways to interact when the object of your library affections is not working the desk or not at work. Period.”

Oh, and your clever library jokes and pickup lines? They’ve heard them all and aren’t impressed.

“Why are you making Dewey jokes when we use LC?” West asked.

“For God’s sake, don’t use a pickup line such as “Mind if I check you out?'” Kelly added.

“If you show an honest love for books and things like that, I think that goes over pretty well,” Absher said.

“If you want to get to know a librarian, we don’t care if you have fines, but we’d like you to be into us, not some idealized version of what someone in our position might be like,” West said.

“If you want to date a librarian, bring your A-game,” Kelly said. “Most of them are smart and have a low tolerance for stupid. Most of the librarians I know have high standards for partners and like people who are enthusiastic about learning new things.”

So the next time you’re in a library, think about these misconceptions, as well as these do’s and don’ts. Who knows – you might go in to pick up “Paddle Your Own Canoe” or “Twilight” and come out with a date.