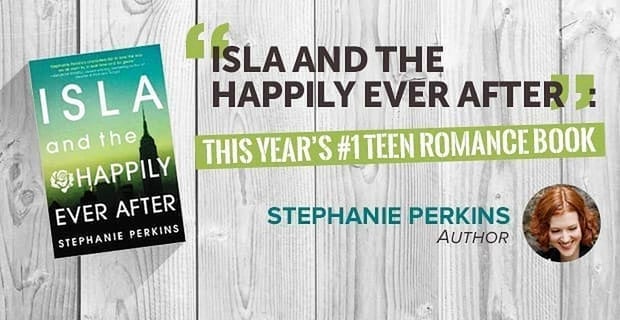 “Isla and the Happily Ever After”: This Year’s #1 Teen Romance Book

TL;DR: With a 4.5-star rating and raving reviews on Amazon, “Isla and the Happily Ever After” is taking the YA genre by storm. Written by New York Times best-selling author Stephanie Perkins, Isla tells a story we can all relate to – first love.

First love is a magical thing, and Stephanie Perkins perfectly captures that feeling in “Isla and the Happily Ever After.”

Set in the romantic environments of Paris, New York City and Barcelona, Perkins’ charming book follows the tale of Isla, a girl who’s in love with love and pines for Josh, an introverted cartoonist she met at school.

Winding and weaving through love, loss, family conflicts, separation, reunions and more, “Isla and the Happily Ever After” makes your heart race to the very last page.

We talked with Perkins to learn more about the theme of the novel, her motivation behind it and the significant impact its making on young adult fiction.

An exploration of happily ever after

But don’t think it’s all rainbows and puppy dogs from here on out. Perkins throws readers a twist.

While Josh does indeed have feelings for Isla, the two are unexpectedly separated and have to overcome several challenges in order to find their way back to each other.

“It’s an exploration of happily ever after… what’s the reality of that thing we’ve always dreamed about, what it’s like when we actually get it and how we handle ourselves in that situation,” Perkins said.

Perkins, who has been married to her high school sweetheart for 13 years, said she enjoys going against the grain when writing and often takes inspiration from her own life.

“Usually you only get those happily ever afters in fantasy genres

In the case of “Isla and the Happily Ever After,” Perkins used how she felt during the skyrocketing of her success to shape the book’s plot, themes and characters.

“With Isla, it’s this happily ever after idea and getting this thing — this relationship — that she never thought she would, and it blows up in her face. She doesn’t know how to handle it,” she said. “For me, that was happening in my career. The best part was getting to explore these ideas and heal myself along beside her.”

Changing the world of teen romances

While the industry is full of competition, in Perkins’ mind, there’s always room at the table for one more.

“I think it’s so important to have different types of books out there,” she said. “My books are realistic. They are set in this world, but I always like to infuse them with as much real-life magic as I can. I think my books are more escapist in that way.”

And she’ll continue to infuse that magic into her upcoming projects.

She just released a holiday book series called “My True Love Gave to Me: 12 Holiday Stories,” which features tales from a dozen best-selling young adult writers.

She’s also working on a horror novel that will have swoon-worthy romance in it (of course!) but with a bloody, humorous twist.

“It’s kind of everything I do now but with lots of death,” she joked. “It’s nice to have this opportunity to try something new.”

“Isla and the Happily Ever After” is available on Amazon and Barnes and Noble.