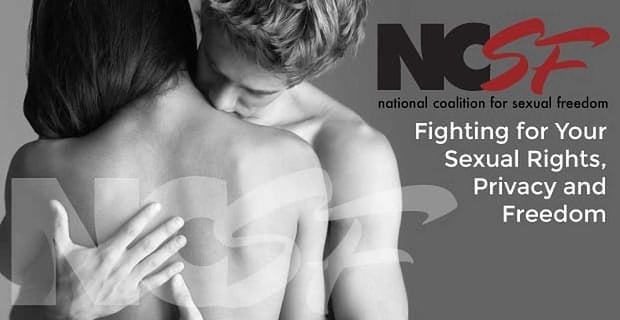 NCSF: Fighting for Your Sexual Rights, Privacy and Freedom

The 411: Founded in 1997 and made up of more than 50 businesses, groups, individuals and more, The National Coalition for Sexual Freedom has been the go-to supporter for people who participate in consensual alternative sexual behaviors.

What about your family? Have you been worried they will shun you if they discovered that you and your partner are swingers?

Susan Wright, founder of the NCSF

Discrimination and concerns like these are just some of the reasons the National Coalition for Sexual Freedom (NCSF) was formed.

Founded by Susan Wright, the NCSF brings together kink and non-monogamy educational groups, therapists, domestic violence centers and other professionals to stand up for the legal rights and privacy of people who take part in these types of activities.

“Our goal is to fight discrimination against people who are kinky or non-monogamist,” she said.

We spoke with Wright to discuss the organization’s most impactful services, how people can overcome prejudices in their lives and the team’s plan to get all of America, and even the world, involved in the discussion.

The NCSF may be a small nonprofit, but they’re still able to create some incredibly impressive initiatives that make a real difference.

Their one of a kind media outreach program works directly with newspapers, TV stations, online outlets and more to get accurate information out there about alternative sexuality, especially when it comes to consent.

“Consent is at the heart of what we do, and you have to make sure that you have consent ahead of time. In this day and age, people look at sex as you make the move and see if you get a no,” she said. “With kink, you can’t do that. You actually have to verbalize what you want first and then be able to speak it and map out the game you’re going to play before you start playing it.”

The National Coalition for Sexual Freedom fights for sexual freedom and privacy rights for all adults who engage in safe, sane and consensual behavior.

The organization also has an incident reporting and response service that helps people who are being discriminated against find kink-friendly lawyers, as well as a kink-aware professionals database that connects people with therapists, advocates and other supporters.

“We help people who are in direct need, and last year we helped almost 200 people, as well as groups that are fighting things like zoning issues or media tension, and we help businesses that are having issues as well,” Wright said.

There are thousands of people out there who have the same interests as you do, and the groups that are a part of the NCSF are here to give you a safe environment to openly talk about those interests.

“That’s the biggest thing we have to teach people — to talk about what they want.”

“If you’re interested in this, there is a world of this happening, hundreds and hundreds of groups. That’s why this is such a rich playground to play in,” she said.

While this new journey can be very exciting and you might be eager to jump right into the physical aspect, Wright recommends taking the time to open up about your desires first.

“That’s the biggest thing we have to teach people — to talk about what they want — because we don’t have good sex education in America, so we’re not taught how to discuss sex in a responsible way as far as limits and boundaries,” she said. “We want to make sure people aren’t overwhelmed by their desires and realize that they have to follow the rules that are set in place.”

3. It’s your right to choose

No matter what the situation is, Wright said you should always be willing to vocalize your opinions and wants, whether that’s saying yes or no to a particular sexual act, communicating about the role you want to take on during a scene or anything else.

The NCSF has received massive feedback over the last 18 years, and the next 18 years look to be even brighter, with more educational tools and valuable services on the horizon.

“Consent is at the heart of what we do.”

“When people are being discriminated against for being kinky, there is nobody else they can go to, and they need help,” Wright said. “It’s really just people coming together with a passion to right a terrible wrong, and I think we have legs because now people are seeing how we have contributed to making a difference.”

When you think about it, books and movies like “Fifty Shades of Grey” could not have happened 18 years ago, and the reason those things can happen now is because of the great work the folks at the NCSF are doing.

“We have been having these discussions for well over a decade, so we’re not surprised to see that the rest of America is interested in this,” she said.

The National Coalition for Sexual Freedom has tons of online resources, as well as materials you can order, and membership is open to groups, business and individuals. To learn more about the NCSF, visit www.ncsfreedom.org.