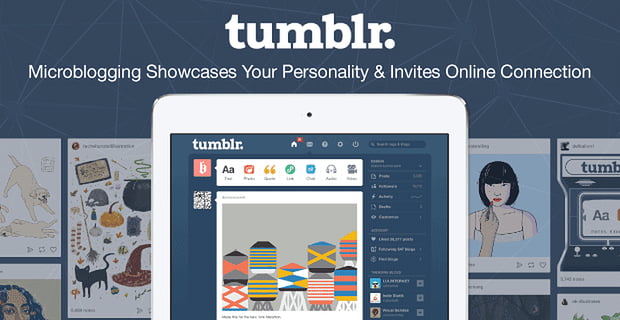 The Short Version: In 2007, a new blogging platform known as Tumblr hit the web, giving people a way to blog about their passion, however they wanted to blog about it. From text to photos to video to audio, these expressive individuals told their stories in a variety of ways, and soon they started gaining their own following and finding other enthusiastic bloggers. Thus, a new way of connecting online was born. Today, Tumblr has over 550 million monthly users on more than 321 million microblogs sharing, exploring, and coming together like never before.

It was 2007, and Social media was in its infancy. Myspace was the largest website of its kind, with Facebook quickly gaining traction. But neither platform was very flexible in how content could be presented. People were increasingly looking for different ways to share their thoughts and opinions and connect with those who were like-minded.

Tumbler is a platform for bloggers to feature their passions and learn about those of other people.

That’s when Tumblr entered the scene — not just as a social networking site but as a microblogging platform that allows users to post all kinds of multimedia (e.g., text, photos, video, and audio).

Almost 10 years later, more than 550 million Tumblr bloggers employ these techniques every month — posting the things that matter most to them as well as bonding with their readers and other bloggers they’re fans of.

Expressive People Come Together in a Content-Driven Community

“Come for what you love. Stay for what you discover” is Tumblr’s tagline, and it’s a rallying call for those who seek to cut through the noise and find the deep, expressive voices they really need or want to hear. With over 321 million microblogs on the platform, anyone can connect with others who love the same things they do.

Once a new user sets up a Tumblr blog — a process that takes only a few minutes — a single click can guide them to other areas that might be of interest. This creates an air of discovery that keeps Tumblr fresh and new.

Tumblr has created a wide-open world for creative people who want to share their thoughts through almost any online medium available in the digital space. From videos to mp3s, Tumblr gives users the proper tools to build their stories, create communities, share their photos and artwork, and otherwise make their voice heard.

Anything posted on Tumblr can be liked, reblogged, and used to spark conversation. In doing so, anyone can become part of the bigger story. That’s how people meet and foster kinships on Tumblr — through the small, yet important, interactions that make the community great.

Tumblr is unique because they offer a little something for everyone. Open to anyone around the world, the site encourages individual expression and connection between users. The openness of Tumblr means everyone can be themselves and find commonalities with others who are doing the same.

Bloggers communicate through a variety of mediums to present what’s important to them.

The result? Those looking for anything from motivation to sympathy to advice to laughter can find it. Here’s how:

1. Text: A Manifesto to Your Love

The mainstay of blogging across the Internet is alive and well on Tumblr, where individuals can express their emotions in words. And there are plenty of other options if words just don’t suffice.

2. Photo: Images to Capture Your Imagination.

They say a picture is worth a thousand words, and Tumblr bloggers take that to heart. Photos attract a lot of attention, and sharing interests through unique photography or artwork has never been easier.

The quote function on Tumblr makes it clear the words are not your own, but they moved you and you wanted to share them to the benefit of others. Quotes can convey what you always wanted to say but didn’t quite know how to phrase it.

Need an inspirational story during a tough time? You can find it. Want to provide rock-solid advice as someone who’s been through a particular situation? You can post it. Want to share a story that can brighten someone’s day? Link it up and let the world read it, too.

Bloggers on Tumblr can preserve their interesting chats on microblogs to look back on fond memories. And users are welcome to eavesdrop on others who are chatting it up, which is always fun.

6. Audio: A Soundtrack for Romance

When words don’t suffice and pictures don’t say enough, music can convey what matters most. Create your own soundtrack for your life, send the right music to the right person, and let others know how you feel with anything from golden oldies to classical to something in a genre so wild that it doesn’t even have a name yet.

7. Video: Clips to Melt Your Heart

From beautiful proposals to 50th-anniversary celebrations, videos can be shared to set the tone for the day. Pull video clips from online or upload your own to make your story more personal for the thousands of readers who could come to your blog every day.

In addition to sharing anything on Tumblr, users can integrate their social networks to facilitate even more personal expression. Rather than compartmentalize parts of their life based on the various social media platforms, individuals can present a well-rounded view of themselves to anyone who cares to pay attention.

Tumblr users can integrate social media networks into blogs to add another layer of expression.

Users can add tweets and continue Facebook discussions on their Tumblr blogs to add a wider variety of content. Including Instagram pictures can also present your message to a broader audience. Put it all together and the result is a compelling look at who you are.

Tumblr gives anyone with something to say a place to say it, in as many ways as possible, and allows for online connections to grow organically. So whether you want to share stories about your adventures as a new mom, your obsession with Taylor Swift, your favorite love quotes, or anything else you care about, Tumblr has a digital podium and a welcoming community for you.

Sean Garrity is a Contributing Editor for DatingAdvice.com and has an extensive background in researching, writing, and editing on a wide range of topics for industry and consumer publications. Sean’s goal is to inform modern daters of the latest trends, technologies, and solutions that might help them meet their match. When he’s not behind a keyboard, you can probably find Sean outdoors camping, fishing, or skateboarding.