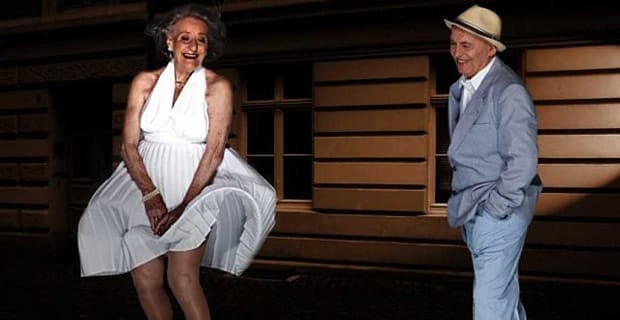 By the time you’re in your 50s and 60s, one of the great joys of dating is all of the high-pressure expectations conjured up by Hollywood and lifestyle magazines go out the window.

Senior singles over 50 are looking for a mate who is a real person. Sure you take care of yourself and you’re physically active, but…

1. You’re not as suave as you used to be

You’re not James Bond, and that’s OK. She’s not a Bond girl either. Well, maybe she was a Bond girl since so many of them are now over 50. Think Ursula Andress, Jill St. John and Jane Seymour.

Still she’s not expecting you to take down three bad guys in her living room before the first date.

However, she is expecting you to pick her up for the first date. Go to her home, open your car door for her and pay for the date.

She also doesn’t expect you to have the sexual prowess of Bond. There’s less pressure, but she’s still interested.

Remember the baby boomer generation brought us the sexual revolution and multiple choices of birth control. Thank heavens! Even though you may not need to worry about pregnancy anymore, you still need to guard against STDs.

2. You’re not as quick as you used to be

So what if you can’t turn five cartwheels and knock out the villains with your left hook as you see her to the door after your date? That’s OK. She isn’t expecting you to.

However, she is expecting you to see her to the door and maybe walk her in.

When you enter her home and she offers you a night cap (because you’re over 50 and alcohol affects you differently than when you were free and 21), you should probably ask for some juice, fizzy water or herbal tea.

Relax and settle in on the couch. Enjoy some adult conversation and a little senior smooching.

She’s not expecting you to audition for the sexual Olympics like a 35-year-old woman is. If you wait until the fifth date or later to do more, she’ll be happy with that. She wants to get to know you first.

You don’t need a perfect physique to capture her romantic interest. You also don’t have to compete in a to-the-death showdown against all the other men on the senior dating sites to land a first date with her.

However, you do need to strike up a conversation in your email exchanges before you ask her out for a first date.

One of the delights of dating after 50 is both midlife women and men have the ability to carry on a conversation, giving you a leg up against the younger guys hitting on her.

Senior women are looking for a real relationship, not a fantasy straight out of a romantic movie.

Women over 50 are some of the hottest women around. Not only do they take care of themselves physically, but they’re also super alluring because they want relationships with men who are real and down to earth – men like you.