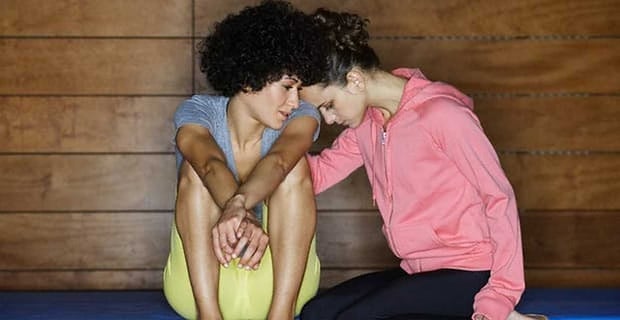 Lesbians Get Friend-Zoned Too (And It Sucks)

If you’ve been out and about with lesbians for any length of time, you’ve heard about the lesbian friend zone.

It’s not a bar. It’s not a meet-up group. It’s not a big event at Ptown or in Las Vegas. It’s the dead end to what you hoped would be a relationship.

What is the lesbian friend zone?

You’ll see it noted in online dating profiles, “Let’s see if we can be friends first…”

You ask a lesbian out and she says, “Well I’d rather we see if we can be friends first before we become lovers,” and then you end up in lesbian friend zone jail.

Or you show up posing as the lesbian friend who wants to be her lesbian lover. You use the friend zone strategy hoping it’ll turn into a relationship, and then you’re crushed when it ends up never being more than friends.

Lesbians use this strategy because it feels safe

What all women of any persuasion want first and foremost is to feel safe, so this feels like the way to go.

If you’re serious about finding a relationship and the woman you’re interested in is delegating you to the friend zone, then she’s just not that serious about dating you.

It’s simple and clear cut. When you say no, it frees you up to keep looking.

If you tell me you love her, you’re crushing out on her and you’re prepared to see if she’ll change her mind, go ahead. Hang out and wait and see. What I do know is that can be a terrifically painful way to live your life.

You want her. You see her all the time, but you can’t have her. Then you watch her throw herself at someone else. Really, how’s that working for you?

I think it’s a downright crappy strategy that keeps you stuck and prevents you from really living your life.

The truth is you’re not living in truth

You’re pretending you’re OK with being her friend when the truth is you’re not OK with it. You’re just putting up with it.

If you’re the lesbian who is using the friend zone to feel safe and to keep a woman in your life as a friend who is into you but you don’t feel the same, I get it.

Company is better than loneliness, but sometimes you’ve got to cut a chick loose and let her move on with her life.

If she’s got no chance in hell of being your girlfriend, tell her. Tell her nicely, but tell her.

She’ll be OK eventually, and she won’t waste her time, money and attention on someone who is never going to love her and want her.

The lesbian friend zone – get clear on this one, gay girls!

How to Date a Lesbian with Dogs