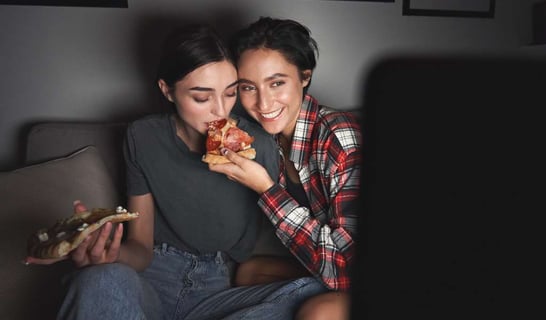 The Impact OITNB Has on Lesbian Dating

Lesbian prison dating! Did you know this was happening?

It’s a total shift from watching the privilege and prettiness of dating and relationships on “The L-Word.”

“Orange is the New Black” is an American dramedy series that is in its second season on Netflix. It’s a hit in more than just the lesbian community and for good reason.

The show portrays the drama of lesbian dating

If we just stick with the story line and suspend belief, which is a requirement for buying into any story, then what you see are all kinds of women from all kinds of backgrounds who are connecting, having sex, cheating on husbands and boyfriends, experimenting sexually with women and even falling in love.

There’s the drama of lesbian dating we are all familiar with, like the “bang-off” contest between the characters Nicky Nichols and Carrie “Big Boo” Black to see who can have sex with the most women.

Ultimately they agree to call a truce on it, but it’s the kind of thing that really does happen in some younger lesbian circles.

It makes for a tantalizing fantasy for any lesbian, but most real-life lesbians will never be found playing the “bang-off” game.

The show portrays the confusion of lesbian dating

Then there’s the central story in season one, the confusing and irresistible relationship between Piper and Alex, the woman who got Piper locked up.

Piper calls it experimenting, but ultimately she finds her attraction and interest in Alex takes over.

This series shows us so many ways lesbians in prison can hook up, but what’s going on in real life? Well, actually lots of the same things these days.

Walking along Commercial Street in Ptown a month ago, I could hear two young lesbians talking about the hookup they had in a hallway the night before.

“Did it mean anything? Are you just a player? Why did you do that to me?” There’s some familiar post-first date with sex conversation going on right there.

OITNB is titillating the world!

The show is turning on lesbians, straight women and, of course, men. That’s a given.

But is it getting lesbians out dating and playing under the sheets? I sure hope so.

What’s the impact OITHB has on lesbian dating?

Perhaps real lesbians who haven’t dated in a long time are getting all stirred up and back into the dating scene.

I hope it’s the kind of TV fare that gets sit-at-home lesbians up off their asses and out looking for love and connection.

Dating in prison is never going to compare to dating in real life. In prison, the lesbians are all captive! You can actually find the lesbians!

That’s the hardest part of real-life lesbian dating and the number one question I’m always asked.

“Where are the lesbians?” Hmmm, having sex on “Orange is the New Black!”

Lesbians, Listen Up: Two Dates Does Not Mean We’re a Couple

Do You Want a Pen Pal or a Girlfriend?

The First Date is Over. Now What?