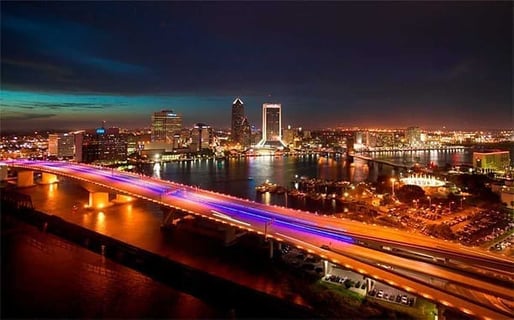 According to GayTravel.com, “With more than a million inhabitants, Jacksonville – Florida’s largest city and, according to The Advocate, one of the top five emerging cities welcoming same-sex couples – is a popular destination for the gay traveler. Gay Jacksonville does not have the ‘Party Central’ atmosphere of sister Florida cities like Key West or Fort Lauderdale. But the less hectic, more mellow attitude that one finds here is often very refreshing for gay travelers looking to truly relax.”

And according to us, the following are the top lesbian/gay bars in “The River City.”

Metro’s website says it is the largest gay and lesbian venue in the state of Florida and features a total of seven uniquely themed clubs under one roof, including The Dance Bar, The Game Room, The Rainbow Room, Club Shadow, The Boiler Room, Club Sappho’s Lounge and The Tiki Bar.

Located in the historic Riverside area of Jacksonville, Metro features an array of performers, such as Kyky Roxx (aka Little Spoon), Aiden Payne, Phoenix DeLa Cruize, Latonga Manchez and Syndel.

Located at 616 Park Street in downtown Jacksonville, The New 616 has all the amenities – outdoor seating, billiards, DJs, karaoke, music videos and a jukebox to name a few. It’s also a well-known spot for events like cabaret night, service industry night and cabaret drag shows, and if you’re planning a late-night after-party, The New 616 offers package beer and liquor to go.

On Yelp.com, Michael E. reviewed the nightclub, saying, “Your bartenders take care of me. Your Maker’s Mark does wonderful things to me as I traipse from seat to seat, inside and out. You have this terrific ability to bring friends I haven’t seen in forever plus two days and me together.”

Established in 1998 by owners Annie and Janie, AJ’s Bar and Grill began primarily as a nightclub, venue and meeting place for many in the Jacksonville gay and lesbian community. Located on Atlantic Boulevard, AJ’s offers events like live bands, wine tastings, banquets, darts and bowling tournaments, karaoke and a DJ dance party every Friday night.

It’s also a restaurant featuring Americana cuisine – nachos, burgers and deli sandwiches. Urbanspoon.com reviewer Christopher said, “AJ’s Bar & Grill. The operative word here is bar. AJ’s is a bar and bar food is what you’ll get. Burgers, wings, mozzarella sticks, all of your typical choices. If I’m in the neighborhood and looking for a beer and a bite, I would certainly consider going back.”

While Jacksonville, Fla., isn’t one of the top gay travel destinations in the world, it’s no secret that “The Bold New City Of The South” is a great place to enjoy a drink and get your groove on at The Metro, The New 616, AJ’s Bar and Grill or one of the other dozens of gay and lesbian-friendly watering holes.

Where Can Marriage-Minded Lesbians Go to Get Married?

Is it Time to Have Sex with Your New Lesbian Girlfriend?