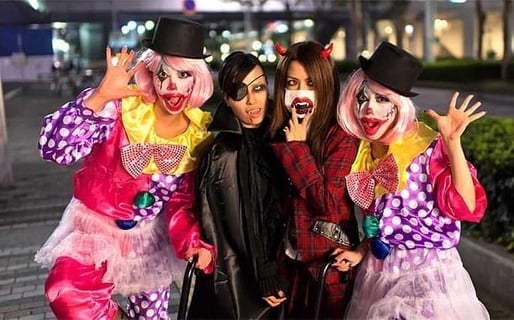 5 Tips for Spending Halloween Without a Girlfriend

Halloween is one of the best days of the year to find yourself single, largely due to the massive number of scantily clad, loosely inhibited women gallivanting around all night long with no good on their mind.

If you’re single for this upcoming Halloween, follow these tips to make sure you have a good time and increase your chances of meeting someone fun.

Set out to have a fun night and that’s it. Don’t expect to get laid. Don’t set the goal of getting laid. Don’t base the whole success of your night on whether or not you get laid.

This is always a good idea when you leave your house, but it’s doubly important on turbo-charged nights like Halloween where hormones run hot and debilitating frustration always sits right around the corner.

There’s nothing wrong with ogling all the hot girls out and about on Halloween. After all, being ogled is part of the reason women dress up a little skanky on Halloween.

As long as you’re generally respectful, as long as you don’t leer, and as long as you never assume anything about a woman based on how she’s dressed for Halloween (or for any given day), you can appreciate the sights without having to hand over your Gentleman Card.

“Meeting a girl on Halloween

lies in going to a friend’s party.”

Just wear a costume already, especially if you’re planning on ogling the girls. Taking the time and expending the effort necessary to actually put together a good costume puts you on the same level as the girls you’re going to meet when you’re out and about.

If you leave your house dressed as you normally do, then you’re a creepy outsider. But if you dress in something fun, funny, sexy or cool, then you and all those hot girls dressed up are peers and you have a much easier in than if you’re just some dude crashing the party.

Halloween is a great time for indulging fantasies. And just as you’ve always wanted to make out with a sexy nurse, a sexy school girl or a sexy Ghostbuster (probably the hottest costume I’ve ever seen), the women you meet have their own catalog of sexy guys they’ve always wanted to hook up with.

Halloween gives you the opportunity to be that guy for those girls. Do yourself, and those girls, a favor — avoid the overdone and infantile Quailman costume and aim a little higher on the desirability scale.

5. Spend time with your friends.

The siren’s song of bars and clubs filled with sexy ladies grinding on each other is a mirage. It’s a fantasy. It’s a carefully constructed image designed to get you to buy drinks.

You probably aren’t going to walk into a bar or club and walk out with one of those girls. Most girls, especially the hottest of girls, like to hook up within their social circle. Most of those girls are going to go home with a guy they already know or a guy who is friends with someone they know.

Your best chance of meeting a girl on Halloween, especially a high-quality girl, lies in either going to a friend’s party or going out with a group of people you already know and like. Which, come to think about it, is actually true every night of the year.