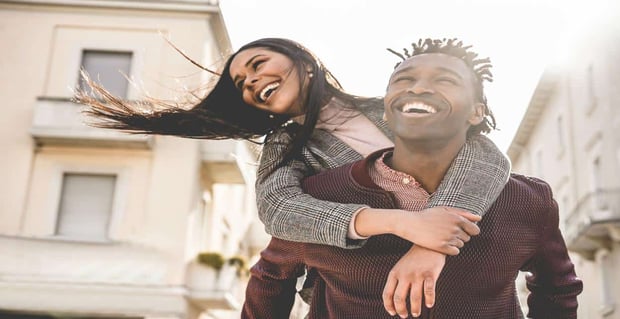 It’s been a weird year, to say the least. No matter who you are or where you live, one thing is certain: You probably weren’t around as many people in 2020 as you wanted to be. We missed parties, birthdays, happy hours, book clubs, soccer games, and so many other special moments.

That means some of our social skills have weakened. Any skill that doesn’t get used as much as it should be atrophies a little. Spring is here, and vaccines are here. So we’re going to be back out there again. That includes going on dates again.

Before you show up in your work-from-home outfit, you need to get a refresher on some essential dating tips. You probably know the usual stuff, like arriving on time, so I wanted to talk about some lesser known but equally important tips.

1. Dating Isn’t About Chasing Women; It’s About Becoming Someone Women Want to Be Around

Let’s talk about goals. A goal is something currently out of reach that you’re striving for. You want to have goals, but if meeting a woman, going on a date, or getting into a relationship is a goal, what you are doing is unconsciously putting women above you. You’re putting them on a pedestal. While it’s totally normal to want to be with someone, if this is your biggest goal, you can accidentally come across as desperate or needy.

If you’re an interesting person, then women will naturally flock to you.

Instead, the goal should be to become the type of person who draws people to you. Imagine you walk into a house party and everyone is clustered around this guy talking. Where do you want to go? Probably to check out what that guy is saying.

So, yes, while it’s important to approach women and make the first move, it’s even more important to be the guy who is so interesting and fun that it makes people want to learn more.

2. If You’re a Good Storyteller, You’ll Go Far in Dating

A few years ago, The New York Times published a great article about charisma. Charisma is one of those things like luck, the X-factor, or chemistry. We know it when we see it. We know it when it’s not there. But it’s really hard to define exactly what charisma is or how to get it.

Being able to share things about yourself in an engaging way is a great quality.

In essence, charismatic people are effective public speakers. They contribute to a conversation with substantive responses and examples of their own on the subject. Ask questions — even rhetorical ones — and listen to what a woman tells you about herself. Use that to help adapt your own stories. This shows not only that you’re listening, but that you get her.

People like good storytellers not because of what they’re saying, necessarily, but how the speaker makes them feel. Your body language, eye contact and good listening skills can capture the listener’s attention and make her feel like she’s the only one in the room.

3. Show Her That You’re Thinking About the Future

One of the most common complaints I hear from women is that a guy they’re seeing isn’t thinking about the future. Now, we know, as guys, that’s just not the case. We’ve all fantasized about what our lives could be. Where we would want to settle down, the size of the family we want, places we’d like to travel to, and things we want to do.

One of the things that I think men do well is live in the moment. We appreciate the right now and sometimes don’t want things to change for fear it’ll change for the worse. That’s not a problem, but you also have to show women with your actions that you care about the future. You don’t have to have it all figured out, but women like to see that you’re moving toward something important.

One of the most common complaints I hear about men from my female dating coaching clients is that men don’t seem to have any plans for the future.

I met my wife during the financial collapse of 2007 and 2008 when I was vastly underemployed/unemployed, but I had a plan. I was already thinking about and working on my current dating coaching career. I was volunteering, writing, getting ready to go back to grad school, and hustling side jobs as much as I could. I also loved kids, and she watched me play with her boss’s kids, seeing the possible future with me.

4. Go on a Date That Highlights Your Hobbies Because This Will Encourage Conversation and Chemistry

Dating is supposed to be fun. I know that sometimes, even pre-COVID, dating can feel like another job. It takes a lot of time, and it can be exhausting. You need to find a way to enjoy dating again.

I’ve never been a big fan of dinner dates. I feel like it’s such an artificial way to interact with another person. There’s little chance to set the stage for chemistry. You’re squared off and eye-to-eye with lots of things between you as obstacles to touch and at least an hour or two of conversation when you don’t even know if you have that much in common yet. Activity dates are where it’s at.

Doing something active on a date, like hiking if that’s what you’re passionate about, will put you at ease and give your date a glimpse into your world.

Go somewhere that you know you’re going to have fun. What happens to your body language when you are having fun? You smile more, your energy is raised, and there’s a sparkle in your eye. This is your best self. This is the type of person people want be around. If you are happy and having fun, it makes it much easier for your date to be happy and have fun.

Don’t spend so much time chasing. Instead, allow yourself to be found by doing what you like. You want to show that you can add value to not just the date but the woman’s life. For example, I once had a client who was a CTO at a fantastic company. He was brilliant but a bit awkward. I told him to take a date to CES, an electronics show, or something similar. That way, not only would he be able to talk about and be knowledgeable about things around him, but as a well-known CTO, he would get people recognizing him, which would raise her estimation of him.

5. Google Yourself So You Know What She May Be Seeing About You

I know that we’ve all done this at some point in our lives, but if you are dating, I want you to do another round of Google searches on yourself. That’s the first thing that someone new is going to do with you. You want to know what your online footprint is.

I’m not saying any of this could be a dealbreaker for your new date, but if you are trying to find a serious relationship and the first page of Google has a dozen pictures of you funneling beer, it may not attract the type of people you are looking for.

You don’t have to scour every page, but just be aware of what is out there, so you can comment on it if you feel you need to.

It’s good to know what information is out there about you.

Don’t just look at the main page of results either. Look at Google Images, Google News, Google Videos, etc. You won’t believe where you may find yourself sometimes. For example, I periodically Google myself, and I once found a weird photo on a Malaysian or Indonesian website that had reprinted one of my articles. They had changed the title from “Why Guys Prefer Shy Girls” to “Why Men Like Women to Be Quiet.” Yikes.

Maintain COVID Safety Measures, But Get Yourself Back Out There!

A whole new world of dating is waiting for you out there, and it is shaping up to be an amazing summer. Don’t waste it. If you follow even just one of these tips, you’re sure to have more success in your dating life. I believe in you!

4 Ways to Be the Don Draper of Dating Marketing