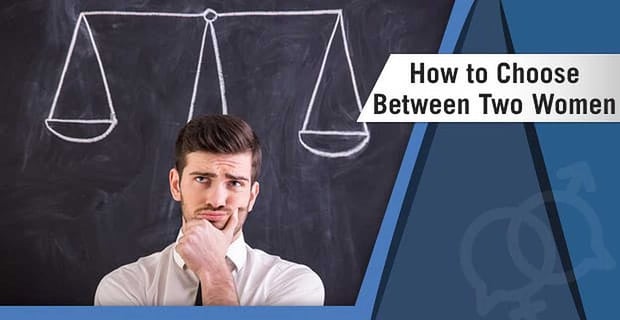 How to Choose Between Two Women: An Expert’s Top 7 Tips

Some people may not think having to choose between two women is a problem, but it is. Oh boy, it is. Many times, it feels like feast or famine. You won’t be dating any women for a long time, and then suddenly you’ve got two great women who could both be potential long-term girlfriends or even more.

While it’s fine to date a few people when it’s casual, at some point, if you want to take it to the next level, you’re going to have to choose. Admittedly, it will never be an easy decision. Hopefully, though, I can give you some tips to make it easier.

This is the time-tested way to help with difficult decisions. Write one of their names on one sheet with a pros and cons column and do the same with the other. Start writing down all the things you like about each person. Then add all the things that go in the con category.

Make a list to make things more concrete and easier to decide.

Don’t do this mentally. Don’t do this on a computer. Get paper. Get a pen. There’s a reason for this. When you write something down, it exists now in three different parts of your brain. Thinking of a reason makes it exist in the memory part of the brain, writing it down puts it into the fine motor skills area, and reading it back off the page adds it to the comprehension place in your noggin.

Basically, what you’re doing is making every reason, both good and bad, more concrete and more real. However, this doesn’t mean you just go and choose the one who has more pros or less cons. It’s a way to critically think about each and every thing about each of your potentials. Be as deep and as trivial as you want.

2. Get Some Input From Friends & Family

This is not a decision for your friends or family to make. Only you can do it, so don’t use this tip as a way to avoid making a decision.

However, it’s always good to have a sounding board and request input. Many times, others will see what you can’t (or won’t) see. Maybe they see you light up when you’re with one woman or you seem more withdrawn with the other.

Get new perspectives on the situation by asking friends.

Plus, many of these people will have had interactions with them that you haven’t had. Listen with an open mind, and allow people to say things that aren’t necessarily complimentary. You need to know what they really think. For instance, if a lot of people have negative things to say about one woman, maybe it will help you take a more critical look at your relationship with her.

3. As Selfish as It May Seem, Put Your Feelings First

This one is tough. If you care about them both, you don’t want to hurt either of them, but you need to choose. Yes, someone is probably going to get hurt, but trying to avoid hurt is going to make you pussyfoot around and be weak and indecisive.

We’re taught not to be selfish, but be upfront about how you feel.

There will be many more choices in your future that will involve one party or another getting hurt. This is called life. Your feelings are what’s important. If one lady is more fragile than the other, don’t use that as a reason not to break up with her. You need to think about you first.

4. Understand the Difference Between Want & Need

This is a hard one. Sometimes it’s very difficult to differentiate between the two. Hopefully, making that list in step number one will help you start sorting this out. Now is as good a time as ever to start figuring this out once and for all for yourself.

If one woman makes six figures and you enjoy the fun stuff you get to do together, that’s a want. That could change on a moment’s notice. Would you then feel the same about her?

I really wanted a girl to play video games and enjoy the occasional smoke with. When I first met my wife, she wanted to do those things with/for me because she wanted to be the type of girl I wanted. As our relationship progressed, she admitted that those things weren’t really enjoyable to her, and I realized I didn’t need that in a woman. Sure, I wanted it, but I needed a girl who wanted to be interested in what I did and show a desire to learn about it, even if it wasn’t her thing. And that helped me realize that while she didn’t necessarily have everything I wanted (who does, really?), she had everything I needed.

5. The “Wrong” Decision Will Not End Your Life

Yes, of course, take their views on the future into account, but don’t get paralyzed over things you have no control over. Yes, you may choose one only to have her accept a job offer in another country the following week. Then you’ll think you should have chosen the other woman, but you’ll never know what could have happened down that route either.

Basically, I’m telling you to relax. While this is an important decision, don’t place undue weight upon it that makes you think your whole life will be dependent on this choice. Heck, in a few months, you might decide that neither of them was actually right for you.

6. Think About Each of Them After You’ve Had Sex & Are Alone

I think every guy has faced the cold, harsh light of reality post-orgasm. Whether it’s the “I shouldn’t have done that,” or “Oh, crap! What’s her name again?” our mind functions (finally) without blockage, without lust, and without ulterior motives.

Use this time to your advantage. As you’re lying there (alone) and your breathing returns to normal, cast your thoughts to your ladies. This can help you see beyond the sexual attraction to the core of what’s beneath.

It’s not going to be a panacea that suddenly makes everything clear, but it helps you think a bit more critically. If thinking of one woman makes you wish you had her there with you right then and the other is more, meh, it’ll help you figure out your answer quicker.

7. Identify the Things That Make You Happy

So you created your list, and it came out pretty even. In fact, if you’re with two great people, it’s going to be close. Now you need to identify what are the things that make you happy.

For instance, on one woman’s pro column you may have:

For the other one, it’s:

Now all of those are good traits to have, and I’m not saying you don’t take into account the first set. Those are very important things to have, but they sound a bit clinical. The second set has things that actively make you happy. They might be lesser things comparatively, but it’s your happiness that we’re trying to achieve.

So while one may be very ambitious at work, which you love and respect, the other one loves to make up cute nicknames for you, which make you glow inside when you hear them. Remember, it’s the small things that make a relationship great.

At the end of the day, be with whoever makes you the happiest.

The only thing I would caution you not to do is to lie. You aren’t doing anything wrong, as long as you’ve been upfront with both of them. Upfront doesn’t equal unvarnished truth but just that they know where you and she stand. The truth can and will get you into trouble, but lying will get you into much worse trouble. It’s not about whether you’ll get caught, it’s about when.

Time to Bite the Bullet & Make a Decision!

Nobody said love was easy or that it wouldn’t involve sacrifice and hurt feelings. Just try and face the music with clear and open eyes, and don’t beat yourself up too badly if it goes sour. These are grown-up decisions made by grown-ups, and after this, you’ll have a grown-up relationship that has the potential to go the distance!

What to Do When She Likes You More

3 Mistakes Guys Make Early on in a Relationship

Guy Rule #73: Know How to Handle Your Liquor

Should I Ask to Kiss Her?