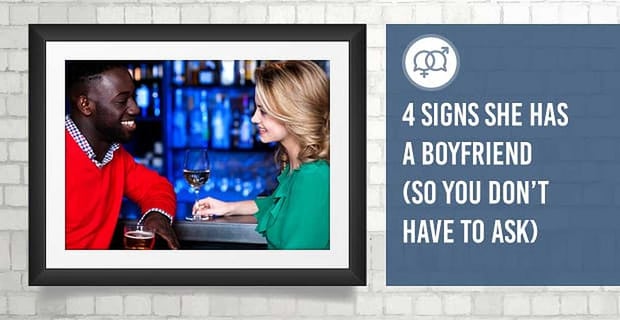 Every time we meet another person, we automatically size them up, trying to figure out who they are. This is even more true when it comes to dating. The moment men make contact with an attractive woman, dozens of questions run through their minds: Is this the type of person I like? Does she want me around? Is she already taken?

Nothing is worse than spending a lot of time with a new crush and thinking you have a chance — only to find out she has a boyfriend. That hurts. So, let’s review a few tips for figuring out if she’s single so you don’t end up with dashed hopes and embarrassed apologies.

1. She’s Not Dressed Up All the Time

For the most part, we all like to look good when we go out, and this goes double for single girls. Not only are they dressing up for the guys, but many times they’re dressing up for each other as well. If a girl is single and ready to mingle, she usually wants to look as enticing as possible. I’m talking sexier than her everyday wear.

She’ll choose an outfit that flatters her, her makeup and hair will be on point, and she’ll probably put on some sparkly accessories. The point is, she looks like she wants to attract someone.

If she’s with other women and they’re all dressed up, there’s a good chance that she’s available and looking to meet someone.

If she’s out with her group of friends and everyone looks pretty good, but she’s wearing ripped jeans and a flannel, she’ll stand out. Maybe she just got off her job as shift manager for a lumber yard, but it’s unlikely, especially when her friends are dressed nicely.

There’s probably a reason she looks so different from her group. One of the reasons could be that she has a boyfriend and therefore isn’t interested in looking absolutely perfect. She’s subtly or not-so-subtly saying “Nothing to see here — move along.”

She might not like leading guys on, and so she dressed that way to indicate her taken status. If she had dressed up, guys may try to talk to her and get her number, and she’ll have to turn them all down. This way, she’s advertising right off the bat that your time is best served talking to someone else.

Fun fact: In New York City, there are more women than men, so the women have to compete more to get a date. You’ll find single ladies dressed to up to the nines to catch the eye of that charming gentleman in the wingback chair. But in San Francisco/Silicon Valley, that ratio is reversed. In a male-dominated climate, women can get away with dressing more comfortably or casually because men will compete for their attention no matter what. Make sure you put your crush’s outfit in context and think about what message she’s trying to send with it.

2. She Has Pics of the Same Guy All Over Social Media

Say you’ve just met a girl and found her social media accounts. Perhaps you saw a friend of a friend online and wanted to connect. Whatever the reason, you now have access to information about her life. So you do what any self-respecting crush would do: You cyber stalk her to learn everything you can. OK, I’m exaggerating a bit, but you definitely want to learn about her. What are her interests? Who are her friends? And, most importantly, is she single?

This is the most obvious sign to look out for — if her social profiles have the same guy all over them, he’s probably her boyfriend.

Being the online detective you are, you start checking out her posts, pictures, and comments. If you see pictures of the same guy on every platform, he’s probably more than just a friend. He’s probably her boyfriend.

3. Her Body Language Suggests That She’s Taken (e.g., Touching the Guy She’s With Or Facing Inward When With Her Friends)

One of the things I teach my clients is how to notice and decode body language. I’m sure you’ve been out with your sister, female friend, or female coworker before, right? And nothing was going on between you. However, when we see a guy and a girl sitting together, we automatically assume they’re together, and we dismiss her. There are so many missed opportunities here.

You can usually tell if a couple is together from their body language. If their legs are turned toward each other, there’s some chemistry. If she’s touching him, there’s definitely some flirting going on. You’d best keep moving.

If her body language looks like it’s closed off, she probably doesn’t want anyone joining her or her group. She could have a boyfriend, and she might not want to be hit on.

But if the couple is facing outward or setaed directly across from each other, she might be single. There are too many small body language clues to be able to write them all here. But, generally speaking, if her energy seems to be going toward a guy and she’s twirling her hair or doing any sort of involuntary grooming, she’s probably taken.

Also, if she’s in a group of girls, you can still get a clue as to her relationship status by watching how the group behaves. If the group is looking outward and around, they’re inviting people into their space. If her friends are being gregarious and extroverted while she’s sitting in the corner on her phone, she may not be single like her friends.

4. Pay Attention to Where You Are and What She’s Doing (Such as Buying Men’s Clothing at the Mall)

Time and location already tell you a lot about her possible relationship status. If she’s at the mall buying men’s ties, she might not be single. But if she’s in a grocery store buying food that looks like it’s for one, she might be single.

Two of my favorite days to meet people are Valentine’s Day and New Year’s Eve. If you go out to a bar or lounge on those nights, 100% of the people who are out (and not obviously part of a couple) are single. Those two days are the biggest boyfriend/girlfriend nights of the year. If she doesn’t have someone by her side, she’s probably feeling a little down and would love to have someone to talk to and enjoy herself with.

If she’s in the grocery store and buying food that looks like it’s only for one person, that could be a sign that she’s single.

Every single person at holiday parties is regretting, to a degree, that they don’t have someone special to do date night with. This means you immediately have something in common with each other that can start the conversation.

Look for the Signals & Avoid Possible Embarrassment or Rejection!

Remember, you can meet people anywhere in the whole wide world, not just online and at bars. Learn to look for signals that she might be unattached so your smooth lines don’t fall on deaf ears. A lot of single women would welcome a little friendly chatter while she waits in line for her coffee. Who knows, maybe you’ll set up the last first date you’ll ever have!

4 Reasons Why She Gave You the Cold Shoulder

How to Handle Tests From Women [Video]

Why is She Ignoring Me?