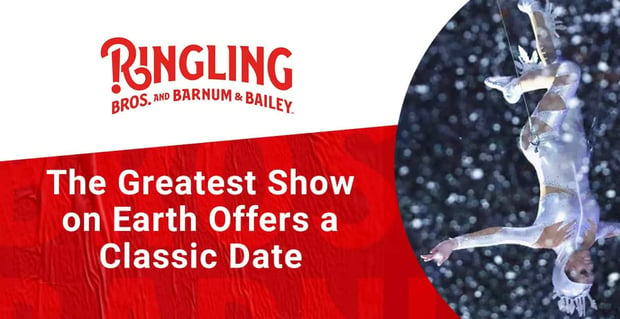 The Short Version: Many couples struggle to find new ideas for dates. With the Ringling Bros. and Barnum & Bailey “Greatest Show on Earth” coming back, they need look no further. The show returns in September 2023 to over 50 North American cities. It’s a great option for couples to enjoy quality time together while watching the best talent in show business.

The Ringling Brothers circus started in 1871, bringing entertainment, wonder, and joy to audiences all over the United States. When the circus merged with Barnum & Bailey’s “Greatest Show on Earth” in 1919, creating the Ringling Bros. and Barnum & Bailey “Greatest Show on Earth,” the world was mesmerized by the company’s powerhouse circus. Following its inception, the famed circus was a leading source of entertainment in the 20th and the start of the 21st century.

Children dreamed of the circus coming to their town and growing up one day to become circus performers themselves. Families bonded over the shared excitement and happiness they found in watching the performance together. Couples looked forward to getting to know each other on dates with the dynamic circus show. The circus provided an up-close, personal show for all.

In 2023, “The Greatest Show on Earth” will finally come back.

After its closure in 2017, Ringling Bros. took a few years to produce a new and improved circus for the modern era. The new show will be an excellent experience for couples looking to find a fun and unique date idea. The show hearkens back to a wholesome date their grandparents may have gone on, just updated for current interests, innovations, and ethics of entertainment.

“We’ve spent countless hours conducting research, speaking with consumers and scouting for  talent all over the globe to deliver an experience unlike any other,” said Juliette Feld Grossman, Chief Operating Officer of Feld Entertainment and Producer of The  Greatest Show On Earth. “The Greatest Show On Earth, with its combination of thrills, artistry, comedy and  whimsy, will bring generations of families together, creating memories that will last a lifetime.”

Enjoy World-Class Talent With Your Partner

While calling an event “The Greatest Show on Earth” may sound like an exaggeration, with Ringling Bros., it’s not. The event will boast the most talented performers worldwide, all working together to create the most magical experience possible.

“A global search for the best acts in the world to bring the show to life is currently underway,” the Ringling Bros. team said. “The creative team is not only looking for exceptional talent but also larger-than-life personalities whose stories of commitment and dedication to their craft will create powerful connections with the audience. Auditions for The Greatest Show On Earth are now taking place in countries  including Ethiopia, France, Mongolia, Argentina, and the United States.”

Even the most dedicated fans of live music or the theater will be hard-pressed to have seen another show so selective in its performers. Taking your date to see “The Greatest Show on Earth” will be an exceptional experience for you. You can be wowed by the spectacle before you, all while getting to know the person beside you.

The show will push the limits of what you thought was humanly possible. “The live production of The Greatest Show On Earth will celebrate amazing talent from around the world, displaying incredible feats that push the limits of human potential and create jaw-dropping moments,” the team said. “New technologies and a 360-degree experience will break down the barriers between the performers and attendees. Additionally, each show will incorporate interactive  elements that engage the audience, ensuring that every performance is unique.”

Connect Through a Fascinating Experience

Any romantic knows that one of the best ways to show your partner, date, or even friend that you care is to put genuine effort into the relationship. You can make them their favorite meal, read and discuss their favorite book, or put in the extra effort with their family. You can show your thoughtfulness in many different ways in the relationship, but nowhere is this more true than when planning interesting, personal dates.

Coming up with creative ideas for dates and other activities to do with that special someone can be difficult, especially when you go on multiple dates with one person. Sometimes it feels safest to just go to another dinner at the same restaurant instead of thinking of something outside the box. But if you don’t take the time to think of something special, you’re missing out on an excellent opportunity to impress your partner.

Consider checking out The Greatest Show on Earth for a unique and fun experience that any date will love. Not only are the acts in the show one-of-a-kind by nature, but since the show stopped running in 2017, it’s unlikely that your date has ever been. And even if they have, the new version of the show will be so changed and improved from the older version as to be nearly unrecognizable, save for the classic charm associated with a Ringling Bros. circus.

“We are innovating all aspects of the live show and modernizing the franchise to create an engaging property that is built for today’s families and will last another 150 years,” Juliette said.

Watching “The Greatest Show on Earth” with your partner will give you plenty to discuss with your date. In addition to comparing your favorite acts of the night, it will also suggest deeper topics to ponder together. You can talk about your childhoods and the shows that delighted you as children. When your partner sees how enthralled you are in the show before you, your feelings for each other may deepen. It’s an excellent opportunity to have pure fun with each other in a new and wondrous setting.

Have a Night You Won’t Forget With Ringling Bros.

You have likely seen plenty of movies in your life, whether by yourself, with friends, or on a date. While some of those films were memorable, many were not. But with the full experience of “The Greatest Show on Earth,” you and your date will never forget the night you shared at the circus. From the brilliant colors to the fabulous acrobatics on stage, “The Greatest Show on Earth” will remain a pleasant memory for you and your partner for years to come.

You don’t want your next date to be forgettable or feel impersonal. When you take your date to “The Greatest Show on Earth,” that won’t be a concern. The nostalgia of going to the circus is irresistible to young sweethearts, who will be struck by the marvels in front of them.

Studies have shown that getting your heart racing on a first date is a plus: Couples who experience some adrenaline rushes together are more likely to experience attraction. When you and your partner see the extreme skills of the performers at “The Greatest Show on Earth,” your immediate nervousness will make the two of you feel for each other. Taking your sweetie to such an electrifying performance is a surefire way to secure that second date or keep your longtime partner attracted and interested.

Tickets for The Greatest Show on Earth go on sale in April 2023, so be sure to get those in advance and plan for an exciting and memorable date.

The show will combine the tradition of a classic circus with modern ingenuity. The Ringling team has even created a new, updated logo to match.

“The refreshed look of Ringling, as conceptualized in a new logo, has been designed to evoke the brand’s rich heritage while also creating feelings of wonder, discovery, and joy,” the team said. “The ‘R’ in Ringling combines the inquisitiveness of a question mark, along with the punctuated excitement of an  exclamation point. This unique design creates the Ringling interrobang, which is a perfect symbol  to punctuate the ‘WOW’ and curiosity of the brand.”