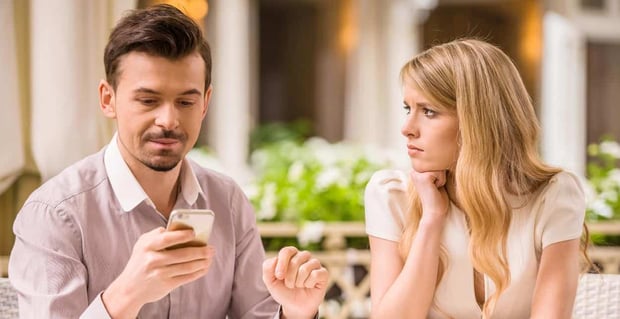 What Should You Not Do While Dating?

When I first meet with new clients, I ask them “What is dating supposed to be?” The answer is usually “fun.” It doesn’t mean it’s fun all the time, but it should be.

While we’re supposed to enjoy dating, you want to make sure that you aren’t sabotaging your nascent relationship. I have a lot of advice on what to do, but it’s also important to know what not to do.

So, you’ve found yourself a wonderful new woman and have been going on a few dates with her. Congrats! I want to make sure that you continue along with your great chemistry as you head toward the future.

Getting into a new relationship is exciting and involves a lot of emotions. Our instinct is to ramp things up quickly. If you ‘ve recently gotten out of a long relationship, you may drive it even faster. You want to hurry up and get back to that level of intimacy you had.

Don’t go on all her social media profiles and like and comment on everything. It will come across as information overload. Also, don’t try and rush the emotions either. I know it’s wonderful, comfortable, and fun to cuddle up with a loved one on a cold and rainy Sunday and binge-watching some shows. You’ll get there. That ease of comfort comes after time, so don’t rush it.

2. Don’t Try to Be Who You Think She Wants

Men are just as susceptible to media influences as women are, and every year there’s some new version of men. First, it was the alpha male. Then the sensitive guy. Then a metrosexual man. Then a hipster. Then a lumbersexual. Then men needed to have fit bods. Then we needed dad bods.

The perfect man doesn’t exist, so don’t try to be him.

Honestly, it can be exhausting trying to follow the latest trend or figuring out what women want, so stop overly trying. First off, even if you were right (and you’re probably not) in trying to guess what type of guy she likes, it’s not going to be authentic to you. You’ll never be comfortable, and you’ll always worry that you’ll inadvertently slip out of the persona you are trying to mimic.

There’s no way for this to be sustainable. Be yourself, your best self. There’s someone out there who is going to want that. The more you disguise it, the harder it will be for her to find you.

3. Don’t Overly Focus on Her

One of the annoyingly incorrect adages that men are taught is “happy wife, happy life.” Basically, “you need to make sure she’s happy and everything will be all right.” Well, that’s just idiotic.

I mean, yes, we should all want to make each other happy, but that saying is professing that we do it at the risk of our own happiness. That’s wrong. It’s not all about the woman.

There are three entities in a relationship: you, me, and us. Each one needs to have focus and energy to allow all three to thrive. Suggest things that you want to do, even if it’s not something she’s necessarily a fan of.

What Not to Do When First Dating Someone (#4-6)

Let’s say you just had the most perfect meet-cute in the world, and now you have an awesome woman on your arm. You can’t believe it — she’s with you! While you’re all giddy, excited, and a little scared, make sure you don’t accidentally scare her off before it gets good.

This is one of my weaknesses. I am totally an oversharer. Or, as my therapist put it, “You have boundary issues in that you have none.”

In the beginning of a relationship, it should be light, fun, and exciting. There will be plenty of time to learn all of the deeper or bigger issues in each person’s life. That time is not right at the beginning.

You may be excited to have this bond with someone, and you want them to know all about you. But now is not the time to talk about your crazy ex, all the medications you have taken or are taking, that time you got fired for drinking on the job, or your deepest fears. Wait until there’s more of a foundation in the relationship.

Another gem of wisdom that men are given is “Just ask her questions. Women love to talk about themselves!” Listen, we all love to talk about ourselves; it’s not just women. When guys take this advice too much to heart , it can be totally annoying and off-putting.

One of my female clients was telling me that her date just kept rattling off question after question like he had memorized a list that he needed to get through. While asking questions is good, as it helps you get to know each other, allow the conversation to naturally progress. Go on tangents, throw in your two cents, and share some of your experiences.

6. Don’t Talk About How Dating Sucks

I know dating can be taxing, annoying, and feel like a second, unpaid job sometimes. But your date is not the one on whom you should unload these feelings.

I know that sometimes it’s fun to share and gripe about something together. But, when you talk about how dating these days just sucks, there are no good women anymore, and they only choose “Chads,” you’re bringing a lot of negativity into the burgeoning relationship.

You want to be in a good headspace and not be cynical or jaded about the dating world. Keep talking about how bad it is out there, and she’s gonna throw you right back into it.

What Not to Do When Dating a Divorced Woman (#7-8)

Oftentimes, a lot of the best women are found after a divorce. There are websites devoted to it, lots of articles on getting back out there, and circles of friends all hoping for her to meet someone nice after her horrible husband left her. But there will be differences.

7. Don’t Ask Her Why She’s Divorced

I can’t believe I have to use this as one of the tips, but almost every client I have who is divorced gets asked why they got divorced. And it’s usually during the early dates!

She’ll tell you why she got a divorce when she’s ready to share that emotional story.

This is not a good question. First, it’s way too personal to be asking at the outset. Second, it could have some really nasty emotions attached to it, and those aren’t the type of emotions you want to access on a date. If you enjoy being around her, and she enjoys being around you, the reason will come up. Let her tell you when she’s ready. Don’t pry or make insinuating comments.

You’re dating someone who may or may not have processed all her emotions. Divorce is like a small death, the death of a relationship. There will be a mourning period, an introspective period, and lots of other emotions attached to it. She may have lost a good portion of her social group, and she may be trying to figure out who she is again and what she does and does not want in her new relationships.

Don’t try and rush her to forget about her ex. Don’t expect her to have the same energy as would a single woman who hasn’t lived through divorce. She led a whole other life for a bit. She’s leaving that behind. Rushing her is only going to push her away.

We all have a variety of issues, and anxiety is a very common one. You want to be open and inclusive in your relationships, and that’s great. But, in your efforts to help, you could end up shooting yourself in the foot.

Men are fixers. We are hard-wired to try and figure out how to repair something or mitigate a problem. Oftentimes, all women want is an ear to listen and a shoulder to cry on. It’s not your responsibility to try and fix her.

First off, you’re not a trained professional, so you probably don’t have any idea what is or is not a good idea. Second, she may feel that being with you is contingent on her getting better. You want to love her for her, not the idealized version of what she could be. Leave this to the professionals.

10. Don’t Assume Everything is Always About Anxiety

When dealing with mental health issues, it’s important to understand that, while anxiety does affect our thoughts and actions, it isn’t the cause of all of them. This reminds me of stupidly blaming any sort of emotional outburst or reaction to women being on their period.

If she has anxiety, it’s not going to be the cause of every problem.

There will definitely be some things that you understand are from an anxiety issue. But just because she doesn’t want to go to see a live music show doesn’t mean it has anything to do with mental health. She just may hate retro-ska music. If you constantly blame things on her anxiety, it can come across as petty and pitying.

Not gonna lie — when I was younger, I dated a lot of older women. I loved it for many reasons, including an older woman’s higher self-esteem, interesting life experiences, and financial stability. However, make sure you don’t make these mistakes.

11. Don’t Continue to Point Out the Age Difference

You don’t want to make her feel bad.

Yes, men like to good-naturedly tease and make fun of each other. But this is not the time to do this to your date. If she comments that she danced to Prince’s “1999” on New Year’s Eve in 1999, you should never respond with, “OMG, I think I was in middle school then!”

Sometimes it can be a little jarring to date an older woman. You want to make sure that you appear worldly and mature and not a goofy young dude. While that’s good, don’t try and compete with older men.

She’s dating you because you aren’t an older guy. She loves your energy, sense of adventure, and interesting take on society. If she wanted an older dude, she’d be dating an older dude.

It’s Never Too Late to Put Your Best Foot Forward!

Now that we’re in full cuffing season, it’s important to put your best foot forward to find yourself your own winter wonder. Get out there, and make it happen!

19 Most Popular Dating Sites by Age