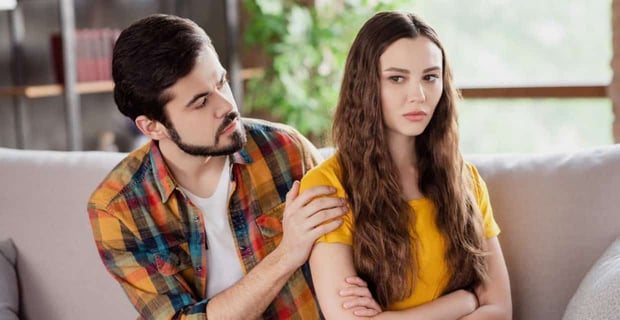 Why Nice Guys Aren’t So Nice for Women

I bet you think that I’m going to back the bad boys or the players or other toxic type guys for women. Nope, I call them “macho boys” in my SYSTEM/DATING DICTIONARY.

The Nice Guy Puts Women on a Pedestal

Let me explain: Wimpus puts women up on a pedestal, but it’s a manipulative type of thing. He thinks he can do deeds, favors and compliment and gift his way into a relationship or something physical. Now, there are some guys who aren’t being purposely manipulative with this type of behavior. They just have been brainwashed to think that is what women want from all the times they’ve turned on a bad romantic comedy and see the guy is on his knees in the rain with an equal amount of his tears and rain actively wilting the flower shop’s worth of gifts he has surrounding him.

Or something to that effect…you know what I’m talking about and I’m being ridiculous with my example (sort of) to make a point.

The point is Wimpus Americanus thinks that if he does A, B, C and D then she should follow the pattern of E, F, G, H…etc.  It doesn’t work like that in the mating dance, but I’ll describe more about that down below.

The Nice Guy Thinks He’s Owed For His Niceness

Now, some of these guys are being manipulative on purpose, You’ve heard about the guy that turns negative after his charms have been rebuffed. He can’t believe he did all that for that so-and-so woman and she didn’t respond the way he wanted (because it doesn’t work like that). Again, it gets back to that flawed “If I do this for you, then you need to act like that for me.”

So, is it hopeless to find a woman?  Do they either value bad boys or nothing?  Have you bought into the nonsense that you can’t treat a woman right or she’ll break your heart?

No, no and triple no. If you want a woman who is flexible, giving, has a good heart, is smart, fun and has integrity, then she does not respond positively to the Macho Boy. And I don’t know any women who enjoy being put up consistently on a pedestal like Wimpus Americanus does.

Gentleman Are Better Than Nice

So, just what kind of guy does a good woman look for?  A Gentleman.

A guy that’s a Gentleman knows that he can’t give her gifts or deeds to raise her interest level. Instead, he needs to — through his actions — be the type of guy that she continually wants to see more of. He’s not going to call all the time, he’s not going to give her gifts until they’re in a relationship, and he’s definitely not going to make her aware by date number three that he’d like her to be his girlfriend.

No, The Gentleman is both a mystery and a challenge. She knows that whenever they’re together they have a great time. He’s fun and respectful, but she’s not able to walk all over him or tell him what to do. She has to chase him as much as he chases her – but she likes it because every other guy calls her within a day after getting her number. The Nice Guy starts professing that he’s in love before the salad arrives on date two. The Gentleman is a little more reserved.

Nice Guys can be boring and smothering. She’s asking herself what she actually did to deserve all this attention since the dude barely knows her – and that’s the point! I coach guys in THE SYSTEM/DATING DICTIONARY that she’s a stranger until you get 10 to 12 dates in.

Remember guys, good women are repulsed by Macho Boy and Wimpus Americanus — so you need to learn how to be a Gentleman.

Doc Love coached men for over 30 years after interviewing thousands of women in his lifetime asking them why they chose one man versus another. What Doc learned directly from women he then taught to men. Doc was a prolific writer and created a lot of timeless dating content for his team to continue sharing his message. Singles can also get additional coaching via his still active blog and podcast at www.doclove.com/blog and www.datingwomenpodcast.com. For more tips visit his official site www.doclove.com.

How to Seduce a Woman — (5 Tips, Online or Offline)

What Should You Not Do While Dating?