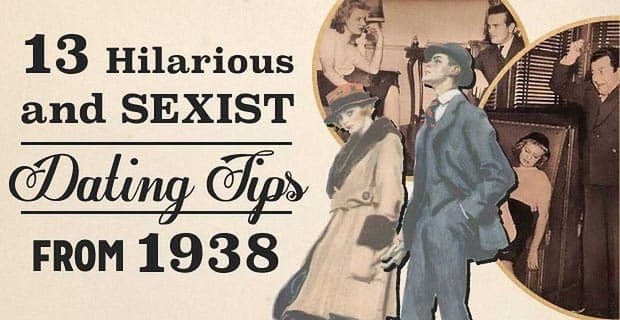 13 Hilarious and Sexist Dating Tips From 1938

Dating has come really far since the early 20th century. Fortunately for us, these aren’t rules we have to abide by – instead we can appreciate that these 13 tips are from a time long, long ago.

In fact, don’t express any feelings or make him show he has a heart. Emotions are for the unrefined.

2. Don’t use the car mirror

He has a hard enough time driving with actually having to look behind him. Plus you don’t want to “[annoy] him very much.”

Apparently this is a sign you’re not paying attention to him. Instead, you should perfect the smile and nod.

If the man can’t refrain from looking at you like a steak, he can wait a few minutes for you to be ready.

Looking good all the time requires retouching – if he can’t handle a little lipstick on his handkerchief, he’s got a problem.

As it turns out, he can only handle one task at a time. Talking and dancing? Inconceivable for him.

It seems like you’d be better off without the bra – then he wouldn’t be able to focus on things like wrinkled stockings.

Some PDA is definitely OK, though this woman appears to be picking bugs off of him. You shouldn’t do that in public.

Don’t even talk about people other than the man you’re with. He gets upset when he thinks you can function without him.

If he doesn’t want to talk about it, then you can’t. He’d prefer you just sat there and looked pretty.

You know what? Get a little silly! If he can’t handle a little drunken dignity, then he’s too stiff for a girl like you.

Exactly. You should know if you’re going to talk to other men, you need to be subtle about it. And whatever you do…

At least not with your shoes on.