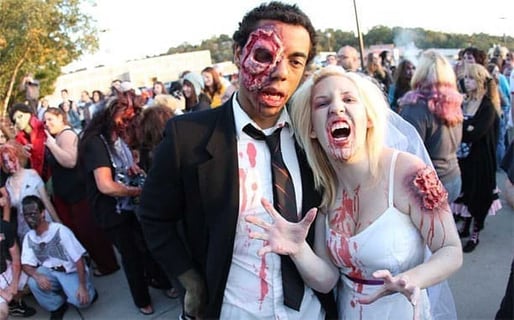 Halloween is more than just candy corn, carving pumpkins and hanging fake cobwebs from your front porch. It’s that one night of the year where you can dress as anyone you want without being encouraged to undergo a psych evaluation.

The following are some great costume ideas for couples that want to role play outside of the bedroom.

Dressing up as a duo isn’t just for the romantically involved. If you’re looking for a Halloween partner in crime, then ask your best guy friend to be the He-Man to your She-Ra.

Fictional characters from the “Masters of the Universe” series by Mattel, He-Man and She-Ra are twin brother and sister from the planet of Eternia.

If you and your beau are the type of couple that likes to get a laugh, why not dress up as everyone’s favorite breakfast combo?

The other plus side is that wearing a costume as obvious as a slice of bacon and a fried egg takes the guesswork out of the usual, “Oh, what are you supposed to be?”

“The getup means nobody will

know who the two of you are.”

If you’re the type of couple who like to garner attention for the hours you spend at the gym, then choose to be one of the hundreds of “sexy” [fill in the blank].

There are sexy skeleton duos, sexy mummies, sexy devils, sexy vampires and even sexy Freddy Krueger and his sexy counterpart.

If you’re that couple who loves the anonymity that goes along with Halloween, then dress as the White Spy and the Black Spy from Mad Magazine’s comic strip Spy vs. Spy.

The getup, complete with a sharp, protruding nose, beady eyes and a fedora, means nobody in the bar or at the party will know who the two of you are — what fun can be had with that!

4 Things Not to Say at the Thanksgiving Table

5 Ways to Find a Date by Valentine’s Day

What I’m Getting My Husband for Valentine’s Day

Why Do People Fall in Love in the Springtime?