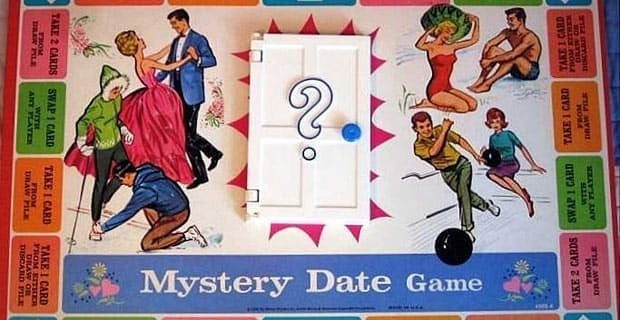 7 Dating Board Games You Wish You Still Had

Dating can be a lot like a board game. You usually wind up with doubles just when you don’t need them, and there’s always the threat of hitting snake eyes.

No matter the object of the game, our 7 Best Dating Board Games have distilled the dating experience, with all of its neurosis and excitement, into an afternoon of game play. The well-crafted content here is funny, relatable and oftentimes wickedly ironic.

Mystery Date was initially launched in 1955 and has since been updated across the decades. Marketed to girls aged six to 14, it’s been parodied in everything from “The Simpsons” to “Ren & Stimpy.” Up to four players race around the board as they prepare for their mystery date, aiming to match their outfit with his style.

From 1967, The Dating Game is similar in design to The Game of Life, though it’s officially based on the popular game show. Here players traverse the board based on a die roll, trying to earn $100 while matching responses with members of the opposite sex. Like the show, the approach to romance and sexuality is somewhat PG-13.

Bragging Rights: find your BF in time for the big date

From Milton Bradley, Sweet Valley High simulates getting prepared for a date, including hair and makeup priorities and some unexpected issues that can derail your plans. Two to four players battle it out to be the first to successfully meet with their beau to win the bragging rights.

Bragging Rights: guess who likes you?

As cellphones began exploding in the ’90s, this game capitalized on their popularity. Here players roll and spin a wheel to advance, using an in-game phone to “connect” with a secret admirer. Players attempt to ID him based on clues and simple deduction. Recommended for ages nine and up.

Bragging Rights: a game of truth or dare

In 1988, this game first launched and would remain considerably popular for more than a decade. Quite similar to Truth or Dare, it pits players against each other’s secrets and limitations. Several variations on the game were released, including Girl Talk: Secret Diary and even a Hannah Montana edition.

Blind Date players maneuver around the board in order to collect pieces of a picture. When assembled, it’s a snapshot of your date, with the winner being the first player to complete their date’s picture. Spin the dial for high numbers, and watch out for potholes along the way.

Based on the British dating show that ran from 2009 to 2013, this game sees players racing to find simpatico with another. Players fill in information about themselves at the top, along with some false facts to throw off the scent. The goal is to accurately decipher the best soul mate after detailing their likes, occupation and personality.

8 TED Talks That Will Change Your View on Dating