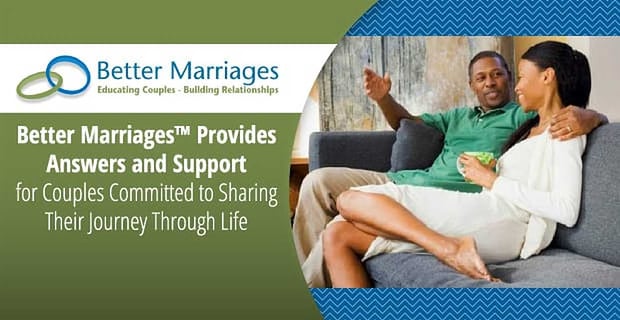 The Short Version: In the 1970s, the divorce rate in America began to climb, leading many observers to wonder whether the institution of marriage was doomed. Despite the celebrity splits that seem to dominate the news, the US divorce rate has been declining for the last 30 years, and marriages today are stronger than they have been in a long time. But that didn’t happen by accident. It’s true that fewer people are getting married, and, when they do, they are marrying later, which may contribute to more stable unions. Still, those who make this partnership last understand that they have to work through problems and disagreements, and nonprofit agency Better Marriages has helped support that trend by providing married couples with training and workshops designed to increase communication, intimacy, and joy for the rest of their lives together.

When I want to see a healthy, stable, supportive, and caring marriage, I look no further than to my parents, who’ve been married for 51 years. They met at a sock hop mixer while attending college in Washington, DC, and stayed together as my dad served in the Army during the Vietnam War.

Together, they raised my brother and myself, with the latter, admittedly, being more trouble than they bargained for. They were both successful professionals who retired happily, and take regular vacations to warm locales where they lounge by the pool together.

I’ve never seen my parents fight or put each other down. They’ve had their fair share of disagreements, but they’ve always worked through them with love and respect. I’ve seen them be goofy and laugh, discuss politics, help out equally around the house, kiss, and figure out their taxes. I’ve seen my dad back my mom’s car into the garage because she likes to drive it right out like a fire truck, and I’ve seen my mom cook meat for my dad, even though she’s been a vegetarian for 25 years. They’re solid life partners, and I’m lucky to know what a strong marriage is, even if I’m not married myself.

But other married couples find themselves struggling through issues that threaten the longevity of their relationships. Luckily, they have an ally that wants to give them a better chance to reach a marriage milestone like that of my parents.

The nonprofit agency Better Marriages works to support couples on their loving life journeys together. Through training, workshops, and support groups, the organization strives to empower couples to keep their commitment to marriage and live happily in love.

“Better Marriages is a feel-good organization,” said Priscilla Hunt, the group’s Executive Director. “When we lead a program or event and look out at a sea of couples turned face to face and knee to knee in intimate dialogue, we know we have impacted their relationships and have made the world a better place.”

The organization was founded in the early 1970s as the divorce rate began to skyrocket, and its mission back then is the same as it is today: Reverse that trend by teaching married couples how to effectively deal with their issues and stay together.

Striving to Turn the Divorce Trend Around

When Better Marriages was founded in 1973, it was called the Association for Couples in Marriage Enrichment — and its services were desperately needed. In the 1970s and 1980s, the divorce rate was rising as American society was starting to come to terms with female equality. This social evolution meant that some men and women had very different ideas and expectations about marriage.

“David and Vera Mace, Co-Founders of Better Marriages, understand that it’s important to provide resources for couples dealing with issues — and there are many to help them get ahead of the crisis curve.” — Priscilla Hunt, Better Marriages Executive Director

It was the perfect time to create an apolitical, non-religiously affiliated nonprofit organization to support marriages.

“David and Vera Mace, Co-Founders of Better Marriages, worked with couples and they realized that, by the time people seek out marriage counseling, it’s often too late,” Priscilla said. “They understood that it was important to provide skills and resources for couples dealing with issues — and, there are many — to help them get ahead of the crisis curve.”

Better Marriages, based in Winston-Salem, North Carolina, sidesteps the divisiveness of religious or political boundaries to equip couples with the skills and foundations they need to maintain a strong partnership.

Many founding principles run through each Better Marriages program. First, the agency encourages ongoing, lifelong relationship growth and a proactive approach to nurturing relationships. We all change and grow throughout our lifetimes, and, individually, we’re focused on being our best selves. The question is: Do we grow together with our partner, or away from them?

Better Marriages teaches couples how to develop specific skills — including communication and conflict management — to help them grow together, with love and support. Meaningful conversation and dialogue are necessary to maintain a healthy relationship.

The programs often include another founding principle: Peer support. Better Marriages members are encouraged to participate in ongoing group gatherings with other couples on a regular basis to support each other’s growth. However, even healthy, positive peer support shouldn’t overshadow who knows what’s best for your marriage: You and your spouse.

“Couples are the experts on their own relationships, and we empower them, through our guiding principles, to deal with their issues,” Priscilla said.

A Nonprofit Led by Thousands of Loving, Married Couples

The Better Marriages team is primarily made up of people who are themselves happily married. Priscilla has been married to her husband Greg for 42 years, and the couple works together, speaking in public and leading workshops to help other married couples develop strong, healthy, mutually-satisfying relationships.

The organization’s board of directors comprises 12 couples from across the United States. Not only are they committed to running Better Marriages, but most are Certified Leader Couples who have been trained to hold events throughout the world.

Many members of the Better Marriages Board of Directors are Certified Leader Couples.

“We’ve trained and certified thousands of couples to lead couple programs and events,” Priscilla said. “Leader couples are participatory facilitators who are working on their own relationships as they are leading others to work on theirs. They lead with openness, honesty, and vulnerability.”

On the Horizon: A New Service for Overcoming Financial Issues

Luckily, my parents were in tune with each other, both emotionally and financially, and were in agreement about living within their means and saving money for the future. I never had the coolest clothes or a fancy car growing up, but my parents never fought over money. Now, as an adult, I see how rare that was.

Finances are a trigger point that can create a divide in a marriage, but they don’t have to be. Better Marriages is launching a pilot program called Close Companions that focuses on helping couples overcome stumbling blocks — especially those around money.

“We are told that the biggest challenge financial advisors face is getting couples on the same page in identifying their goals and wishes for the future,” Priscilla said. “That’s all about communication. We know that finances are one of the top causes of stress and conflict in relationships — so we set out to teach couples how to communicate and manage conflict related to their finances. Financial advisors thank us.”

Of course, financial advisers aren’t the only ones giving thanks for the organization’s services. The nonprofit group’s testimonial page makes it clear that the skills learned through Better Marriages have helped many couples stay together, and if they keep working at it, maybe they’ll be together as long as my parents.