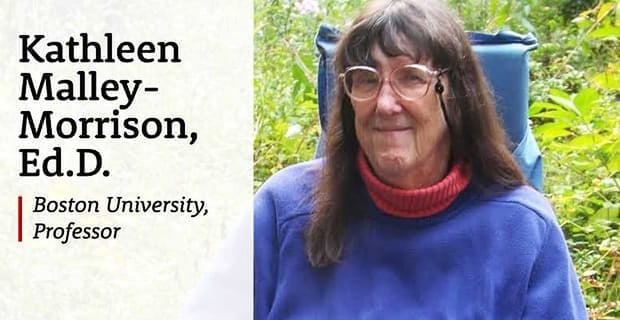 Dr. Kathleen Malley-Morrison: Putting a Stop to Violence One Study at a Time

So exactly how is Malley-Morrison making a difference? I spoke with her to find out.

In the paper “Psychological Effects of Partner Abuse Against Men: A Neglected Research Area,” Malley-Morrison and collaborator Dr. Denise Hines, Malley-Morrison’s former graduate student and a research associate professor at Clark University, wanted to demonstrate that it’s not just men who can be violent against their female partners — women also can be violent against their male partners.

“What the feminist community says is that women are never aggressive against their partners except in self-defense, and that’s not what the women tell us,” Malley-Morrison said.

Using data from more than five studies over the past 26 years, Malley-Morrison and Hines found a variety of evidence that shows men often experience psychological and psychical abuse from their female partners, including:

But according to Malley-Morrison, it’s not just the men who report the abuse — the women also admit to it.

“The women tell us that they will slap, hit, shove, scratch their partners,” she said. “Trying to get them to pay attention is their most common reason.”

Side effects the men experienced included anxiousness, self-esteem problems and even PTSD.

“The men who have been emotionally abused by their partners were more depressed,” Malley-Morrison said.

While this one study may have focused on violence against men, Malley-Morrison’s overall goal with her research is to put a stop to violence everywhere.

“What I want to emphasize over and over again is there are better ways of handling anger, frustration and hurt than striking out physically or psychologically,” she said.

She’s also expanding her research to include:

“One of my goals is to continue to emphasize that psychological aggression can be as harmful to the psychological functioning of the recipient as physical [aggression] can,” she said.

To learn more about Dr. Kathleen Malley-Morrison and her groundbreaking research, visit engagingpeace.com.