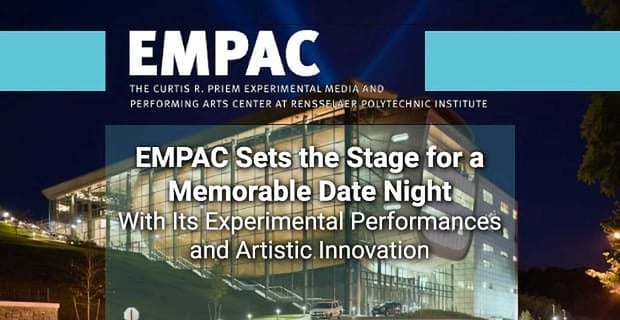 The Short Version: Coffee or dinner dates can often be boring ways to get to know someone special, as personalities and passions take a back seat to formalities. If you find yourself stuck in an awkward date rut, switch it up with something that’s sure to get both you and your date talking. Visit The Curtis R. Priem Experimental Media and Performing Arts Center (EMPAC), where art and technology converge on the campus of Rensselaer Polytechnic Institute. EMPAC, based in upstate New York, hosts cutting-edge theater, music, film, and dance performances that incorporate mind-bending technological innovations. It’s a wonderful venue for a memorable date experience.

Boring dates can be deflating experiences. I’ve been out with guys who took me to a sports bar, ordered me a beer, and expected that would impress me. I have to fight the urge to roll my eyes as TVs and jukeboxes blare around us. I usually sip my drink and bow out early, disappointed with the lack of creativity.

Compared to that yawn-inducing evening, the interactive art I discovered while studying journalism at New York University was transformative. Right around the corner from my apartment, the famous Blue Man Group splattered paint on audiences packed inside an old theater. Art installations in museums throughout the city featured videos that spoke to me and dancers bending in ways that didn’t seem real. It was an exciting and memorable time.

When I would take a date to an artistic performance, we’d usually walk out and begin a conversation that lasted well into the evening. In fact, years later I still remember those experiences. An artistic performance is an excellent way to weed out the boring dates and find out if a potential partner shares your outside-the-box mindset, and some venues push the limits of performances even further.

One of the most cutting-edge, experimental performing arts centers in the US is just a couple hours north of New York City. The Curtis R. Priem Experimental Media and Performing Arts Center — known as EMPAC — fosters the convergence of art and technology at Rensselaer Polytechnic Institute. And its performances are the opposite of boring.

“EMPAC audience members are risk takers, folks who are excited to step into some unknown territory and see what happens,” said Josh Potter, EMPAC’s Marketing and Communications Manager. “People often leave EMPAC shows talking about much more than whether they liked them or not. They’re more of a conversation starter for thinking through the ideas and experiences in subsequent days. That’s why an EMPAC show is perfect for a date. It’s not just coffee; it’s something that will stick with you long after the curtain falls.”

Built in 2008 to accommodate technical research and performing arts production, EMPAC was designed to be innovative from its inception.

“We create a lot of original art from traditional genres: concerts, theater performances, dance performances, and film production. But, often, performances are a mixture of those,” Josh said. “The idea is to bring in artists from different genres so they can collaborate on different kinds of productions. That results in challenging, adventurous shows, stuff that’s outside the box and not what you expect to encounter at a concert venue.”

EMPAC hosts performances from the traditional to the purely experimental to delight visitors.

EMPAC resides in a 220,000-square-foot facility with four venues and state-of-the-art architectural engineering to handle new dimensions of art. As a result, artists who specialize in many genres can display their work.

The Center is also home to an artist-in-residence program that fosters the development of new projects throughout the year — with most work taking place while school is in session.

If your date likes dance, theater or music — or perhaps a mix of all three — you can enjoy a unique show at EMPAC.

EMPAC’s artist-in-residence program helps artists produce experimental work they couldn’t produce elsewhere. One example is Tesseract, a collaboration between filmmaker Charles Atlas and two choreographers from the Merce Cunningham Modern Dance Company. Thanks to EMPAC’s tools, the team created a two-part performance that married live dance with a 3D film.

The result is a you-had-to-be-there moment that you can share with the audience and that special someone sitting next to you.

“It’s a hard concept to describe, in part because it is not a spectacle that had ever really been done before,” Josh said. “EMPAC is the kind of place that makes you say, ‘Whoa, what just happened?”

EMPAC makes for a great date because its out-of-the-box art can spark conversations that lead to more in-depth discussions about your worldview, values, and how you react to creative expression.

There are many fascinating events on the schedule that would make for an extraordinary date. Upcoming shows include the Formosa String Quartet, which will play all four venues within EMPAC so audiences can experience its performances in different acoustic environments.

Another event is an operatic adaptation of David Lynch’s movie “Lost Highway” from German composer Olga Neuwirth. Some performances use Wave Field Synthesis, a 3D audio technology that creates the illusion of an object coming at you from a screen.

“We’re performing the musical component of the opera through a system of High Order Ambisonics, a dome of 64 speakers around the audience,” Josh said. “You’re in this big snow globe of speakers, and it’s a totally immersive surround sound experience.”

Celebrating a Decade of Innovation With Ground-Breaking Projects

EMPAC has been around for nearly a decade, and it’s become a fertile testing ground for innovations in performance art and production. Josh said the Center has commissioned new pieces for its official birthday celebration in October.

“We’re having a three-day celebration and will unveil new projects created just for the occasion,” he said. “There’ll be a production at each of our venues — in music, dance, theater, and time-based visual arts, which is much like film.”

And when you attend a performance, be prepared to provide feedback for the EMPAC staff in the form of a survey. Surveys accomplish more than merely rating the performance — they’re an opportunity to formulate your thoughts and reaction to it. And, of course, you can continue forming your opinions well into the evening with a special someone.