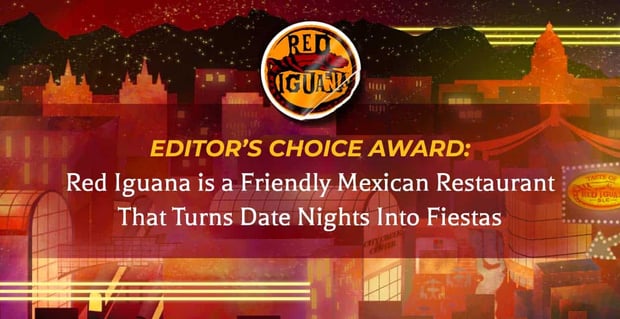 The Short Version: Since opening its doors in 1985, Red Iguana has become one of Salt Lake City’s most popular Mexican restaurants. Its three locations serve over 1,500 people on the average day. Red Iguana is a family-owned business with a deep appreciation for Mexican cuisine and culture, and its authentic menu has won recognition from foodies across the country. Taken as a whole, Red Iguana’s award-winning dishes and friendly atmosphere make it an inspired choice for couples looking to spice up their date nights and spend quality time together.

On a typical night, you’ll see dozens of people waiting outside the doors of Red Iguana. Some are Salt Lake City locals, while others are tourists who stumbled upon it by accident or perhaps saw the Mexican restaurant on “Diners, Drive-ins & Dives”. They may come from different places, but they all show up to this award-winning restaurant ready to treat themselves to a fine meal.

Red Iguana is a family-owned establishment that has been delighting people’s taste buds since 1985. The kitchen churns out spicy sauces, massive platters of food, and indulgent desserts, while the bar whips up refreshing margaritas, sangria, and cocktails.

As far as date nights go, Red Iguana is a crowd pleaser. Couples may have to speak up to hear each other at this popular dive, but they’ll be in foodie heaven once their dishes arrive.

It’s no wonder that Red Iguana has consistently ranked as one of the best casual eateries in the country. Patrons love the joyful ambiance, fast service, and mouth-watering cuisine here.

In 2005, Lucy Cardenas took over the family business from her father Ramon Sr., who’s now retired. Lucy and her husband, Bill Coker, have poured a lot of love into Red Iguana over the years. Lucy said she feels a sense of responsibility because Red Iguana has been so beloved by so many for so long. She wants to stay true to the restaurant’s Mexican roots while bringing new ideas and surprises to this Salt Lake City staple.

Lucy told us Red Iguana’s mission is near and dear to her heart because it’s about spreading joy in the community. The restaurant brings people of all classes and creeds together and encourages them to share in a special experience. Red Iguana began with Lucy’s parents in the 1980s, and she plans to see it continue for many more years to come.

“I’m very proud of my family’s legacy,” she said. “I want to uphold our reputation, and I’m constantly striving to make sure we remember who we are and where we came from.”

Ramon and Maria Cardenas were born in Mexico, but they moved to Salt Lake City, Utah, to live the American dream. The couple shared a passion for cooking Mexican food, so they opened the Casa Grande restaurant in 1965. They created unique menu items that kept people coming back for more, and the Cardenas family became locally famous as successful restaurant owners.

Lucy Cardenas has followed in her parents’ footsteps and runs Red Iguana with pride and joy.

Ramon and Maria opened the Red Iguana in 1985, and it became an instant hit. This small restaurant helped rejuvenate Salt Lake City’s downtown area. Seemingly overnight, Red Iguana went from a hole-in-the-wall Mexican place to a vibrant hub of activity, particularly around dinnertime.

In 2002, Maria Cardenas passed away, and her daughter Lucy stepped into a leadership role at Red Iguana. She and her husband had moved back to her hometown when her mother got sick, and they began working hard to see to it that Maria’s recipes and her restaurant lived on.

Red Iguana has thrived under Lucy’s leadership, but she says she owes everything to her parents for starting this wonderful tradition.

“The menu is all my mom and dad’s creations,” Lucy said. “And I’ve honored that after all this time.”

Known for Its Killer Dishes Inspired by Family Recipes

The heart of Red Iguana’s success is its amazing signature dishes. From the Killer Nachos to the Mango Enchiladas, this menu goes above and beyond what you’d expect from the typical Mexican restaurant.

Whether you’re in the mood for a taco, burrito, tostada, or something else entirely, Red Iguana’s menu is certain to have something that will hit the spot. It offers a variety of unique flavors and fresh ingredients to satisfy diners. The kitchen makes many gluten-free and vegetarian dishes, and it also has signature mole sauces to spice up any meal.

If you’ve never been to Red Iguana, ask for a mole sample to see which of the eatery’s eight spicy sauces stand out to you. Some of these sauces can be quite spicy, but the servers will always warn diners before bringing the heat. The restaurant sells take-home pints and quarts of mole, so couples can go home and create delicious Mexican meals in their own kitchens.

Red Iguana’s menu has so many appetizers, main dishes, and desserts that it can be hard to choose just one, so the restaurant has put stars beside the most popular dishes. The menu also uses a little picture of a cliff diver to indicate meals made for adventurous eaters.

The Puntas de Filete a la Norteña (or Filet Tips of the North) is one of the most popular dishes on the extensive menu. This sirloin dish rests atop an almond-based mole and refried beans. It is pleasantly spicy, and you can turn up the heat by asking for additional chile sauces.

Many of Red Iguana’s dishes have a rich family history. For instance, Ramon Jr’s Quesadilla San Francisco was a favorite of Lucy’s brother, and Ramon’s Famous Fish tacos have been on the menu since her father opened the restaurant. Lucy likes having these nods to her family on the menu; however, she continually challenges her chefs to add new seasonal dishes to keep things fresh.

Many Couples Have Made Memories at This Casual Spot

Locals and tourists flock to Red Iguana because they’re hankering for some authentic Mexican cuisine, and they don’t leave disappointed. The generous portions and unique flavors can satiate anyone’s appetite. Many reviewers mention that they had to wait outside for 45 minutes or more for a table, but they say the food is worth braving the crowds.

Couples and families can share delicious dishes and make memories at Red Iguana.

“I can’t imagine a better Mexican restaurant,” said Frank O. in a Yelp review. “This is probably some of the best Mexican food in all of the U.S.”

“This is not the venue for a romantic tête-à-tête,” according to one TripAdvisor review. “The restaurant is bustling, the waiters are on a mission to deliver, and the crowds are quite lively, but all in a no-nonsense, pleasant way.

Red Iguana’s tables are close together, so it can be pretty loud. However, couples seeking a romantic moment can ask for Table 45, a quiet table for two tucked in a small alcove at the center of the restaurant.

“It made for a fun date night,” said an Ohio couple. “I do recommend going early, or being prepared to wait — it’s a popular place, but worth the wait.”

Jay P. said he took his wife to the Red Iguana on their first date, and they often come back to relive that evening when their relationship began. “Red Iguana is the essence of Southern Mexican cuisine with infused flavors that will rock your taste buds and make you forget the fact that you had to wait 45 minutes for a cramped table in a tiny dive,” Jay P. wrote. “This is a restaurant experience you won’t forget.”

Spice Up Your Evenings at the Red Iguana

Red Iguana is one of Salt Lake City’s most celebrated and beloved restaurants, and it only takes one spoonful of mole or one bite of a gourmet burrito to understand why. The kitchen serves authentic Mexican food that’s hot, unique, and dripping with flavor. Red Iguana’s signature dishes have been delighting adventurous eaters for decades, and the menu continues to evolve to suit a variety of diets and palates.

Couples can head to Red Iguana to enjoy an unforgettable meal in a welcoming and lively atmosphere. Lucy has continued to uphold her family’s legacy by giving Salt Lake City a colorful place where anyone can sit down and enjoy a hearty Mexican meal.

“You can immediately come in and relax because there’s a great energy in the room,” she said. “It’s a really special place. We’ve been around so long and touched so many souls that it’s hard to even know the impact Red Iguana has had in Salt Lake City and beyond.”