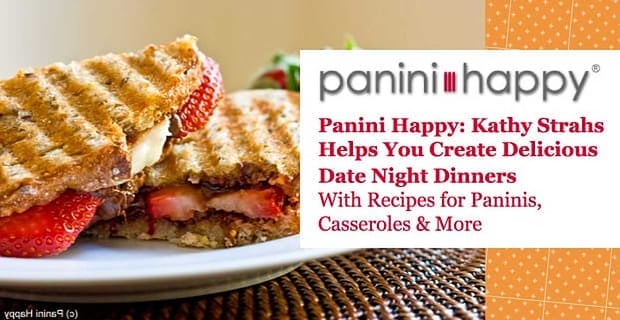 Short Version: When Kathy Strahs received a panini press from her sister one Christmas, little did she know it would inspire a burgeoning career in the culinary arts. She started the Panini Happy blog in 2008 as a way to share her recipes with the world. The blog’s popularity inspired her to write books, including the award-winning “8×8 Cookbook,” a collection of recipes for families. In her books and blog posts, Kathy shares delicious, date night-worthy meals that can bring people closer together. She’s continually learning new skills — both cooking and media-related — as she grows her readership through her publishing company, Burnt Cheese Press.

Many trendy kitchen gadgets get used the first few weeks people own them, but, after that, they’re often relegated to the back of the shelf or a box in the basement. That’s what Kathy Strahs thought would happen with the panini press that her sister gave her for Christmas in 2007.

The panini press was one of Oprah’s “Favorite Things” that year, and people purchased the nifty tool in droves because of its ability to produce perfectly grilled sandwiches. However, many of the presses ran the risk of being tossed aside once the newness wore off.

While she was on maternity leave with her newborn daughter, Kathy decided to make the most of her new kitchen tool. She started a blog — Panini Happy — to document her efforts and provide a much-needed creative outlet. She knew the panini press was capable of much more than basic ham and cheese sandwiches, so she set out to create fun meals with it.

Kathy Strahs founded Panini Happy as a way to share her recipes with others.

The blog also kept her accountable as she shared her recipes with other panini lovers and encouraged them to put their presses to use — rather than put them in storage. The blog’s readership grew, and so did her social media following — which Kathy used to expand her reach.

“I began using social media to interact with readers and other bloggers,” she said. “I also started to attend conferences and meet other bloggers; I found my tribe.” As the blog became much more than just a fun side project, she became more invested in honing her skills in photography, cooking, and writing.

A publisher approached Kathy in 2013, and her first book, “The Ultimate Panini Press Cookbook,” soon followed. In the book, she debuted 205 recipes that she perfected while still managing her role as a mother of two.

“It was challenging to do that many photos and recipes, but I loved it,” she said. “It was also during this process that I became interested in the business side, the marketing, and the cover design.”

Kathy’s publisher worked to include her in those aspects of her first book, processes that authors usually don’t participate in, and that knowledge would continue to help her on her next big projects.

Make Memories With Your Partner While Cooking Tasty Meals

After the success of her first cookbook, Kathy had the idea for “The 8×8 Cookbook,” which showcases dishes made in a simple 8-inch square pan. “This is the cookbook I’d love to see in stores; I’d buy this,” she said about the idea. Since she hadn’t seen such a cookbook, she created one.

The recipes are the perfect size for families with young kids but work equally as well for couples having at-home date nights. “We enjoy cooking together, choosing fresh ingredients, and the low-stress experience that cooking provides,” Kathy said of her and her husband. One recipe from “The 8×8 Cookbook” that makes a great date-night meal is the Rosemary Roasted Game Hen With Roasted Grapes for Two.

“Cooking is a great activity for couples, even if it goes awry,” said Kathy, recalling a time she and her husband were dating. The two of them, along with her sister, had decided to make a pasta dish that contained mushrooms in a truffle oil cream sauce. As they were cooking, they realized that there was an ingredient in the recipe that each of them wouldn’t eat.

“Even though we didn’t eat it, it ended up being a fun experience that we still laugh about today,” she told us.

The recipes in the cookbook make enough food for two — and usually have leftovers for next day. Beyond the food, the recipes can provide you with some quality time in the kitchen with someone special.

Kathy founded Burnt Cheese Press so she could publish “The 8×8 Cookbook” herself. With that decision, she began raising funds to pay editors and graphic designers to help bring her idea to fruition.

She carried out a successful Kickstarter campaign that brought in $21,000. With the funds secured, she was able to finish “The 8×8 Cookbook” and get it into the hands of the backers by December 2015, just in time for the holidays. It went on to receive the Bill Fisher Award for Best First Book-Nonfiction from the Independent Book Publishers Association (IBPA).

Two years later, Kathy took on her next book project, “The Lemonade Stand Cookbook,” a step-by-step guide for kids to set up — and stock — a lemonade stand. The book has seen its share of success, winning the Gold Award Young Reader Nonfiction from the IBPA and garnering plenty of media attention. The cookbook includes recipes for beverages, snacks, and crafts that can be sold to raise funds for projects kids are passionate about.

“It’s part cookbook and part guidebook with tips to help kids raise money for themselves or to help others to ‘give life a squeeze’ and make things happen,” she said.

Over the years, Kathy has branched out from the world of paninis with Cooking On The Side, a blog that shares the meals she cooks in her daily life. She describes her cooking style as approachable, and she uses lots of fresh, high-quality ingredients in her everyday dishes.

“I like to learn about different cuisines and their techniques for getting the right textures and flavors,” she said. One of her recent interests is a Japanese bread-making method, using a slurry, which produces bread that stays soft and fluffy for several days.

She’s still a very active member of the cooking community, both online and off. She appears in cooking segments on television and even judges cooking contests on occasion.

“The comments I get on my blog and in my cookbook reviews validate all the work I’ve done — and make me anxious to do more,” Kathy said. She didn’t say what her next project will be, but it’s a safe bet that her next endeavor will be of the highest quality — and probably a few delicious recipes.