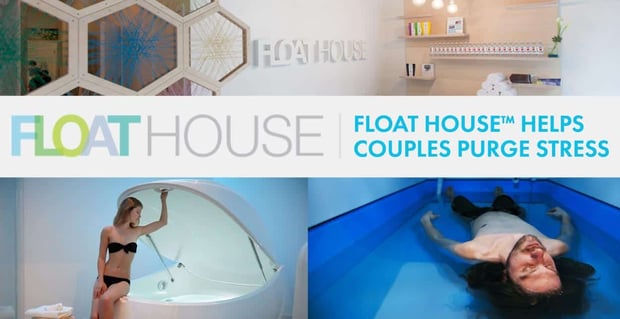 The Short Version: In 2013, brothers Mike and Andy Zaremba predicted a rise in the popularity of sensory deprivation float tanks. So they decided to open Float House, a place designed to help others use the practice to relax and meditate. The tanks are dark, quiet, and filled with 1,000 pounds of salt to make floatation easy, and users can leave their concerns behind and reconnect with themselves. An evening at Float House can also be the perfect way to connect with a special someone, as floating often helps people relax, open up, and share their authentic selves.

It’s Friday evening, and you and your partner have both had stressful work weeks. But you want to find a way to relax so you can enjoy the weekend together. For couples in Canada, that relaxation can be as quick as heading over to Float House for an evening of unique meditation.

At Float House, guests enter private, sensory deprivation float tanks that are both soundproof and lightproof.

“You go into this room of maximum sensory reduction,” said Mike Zaremba, Float House Co-Founder. “It’s pitch black; no photons are coming into your retinas, and it’s dead quiet.”

In the tank, you float in 10 inches of water filled with 1,000 pounds of salt. That makes the water very dense and allows floaters to rest on top of it without any effort. The water is also heated, so it’s difficult for people to tell where the water stops and their body begins.

“Floating is a unique experience because the environment doesn’t exist anywhere else on earth,” Mike said.

After you and your partner have finished with your floats, you can meet back up in the lounge and continue your float date over tea. At that point, you may feel calmer and more open than you were before. Mike said that the relaxed state can make it easier to authentically connect with your partner.

“Floating strips away the facade, and you’re just a calm, centered version of yourself, which is probably closer to who you are,” he told us.

Mike has always been a proponent of using yoga and meditation to preserve his own mental health. But in the early 2010s, he heard about a concept that was gaining traction in the self-care arena: sensory-deprivation float tanks.

John C. Lilly, a Doctor and Neuroscientist, created the tanks in 1954, and they first gained popularity in the late 1960s and early 1970s.

When Mike first tried floating, he used a tank in a woman’s basement in a Vancouver suburb. He was so impressed with the results that he convinced his brother Andy to let him assemble a float tank for their condo. The brothers soon started inviting their friends over for float therapy.

Around 2013, though, commercial float centers began popping up in North America. Mike and Andy wanted to bring their love for floating to Vancouver, so they decided to open Float House.

“When we launched, it was an entrepreneurial dream, and it had a lot of other people watching to see how it would go,” Mike said.

Floating ended up becoming so popular that after Float House opened, the number of centers in North America grew to nearly 400 within the following 18 months.

Mike and Andy’s single location grew, as well, and now the brothers operate a total of six float centers. In addition to the Float House in the Gastown neighborhood of Vancouver, locations are now open in South Surrey, Abbotsford, Victoria, Langford, and Edmonton.

Why does Mike think he and his brother could open so many locations so quickly?

“We create a welcoming environment. Our staff is as engaged and present as they can be, and treat the space like an urban temple,” he said.

Floating has grown in popularity in the last 10 years, as the mental health benefits of the practice have been revealed. Studies suggest that it not only reduces anxiety, but also promotes better sleep, muscle relaxation, and decreased pain.

“A single flotation session is showing in fMRI (functional magnetic resonance imaging) comparisons to have similar effects on the amygdala as a dose of anti-anxiety medication,” said Dr. Justin Feinstein, a Neuropsychologist.

Other studies have noted that regular floating may also promote creativity, athletic performance, and concentration. And Mike said that floating also feels very different than most activities in our lives.

“We’re addicted to doing something, instead of doing nothing, not moving, not splashing around,” he said.

This can mean that some people are unwilling to try floatation therapy for the first time, while others may not devote time to regular sessions. Mike compares floating to yoga; you need to float regularly to receive optimal benefits.

“Maybe it takes a few times to form a deeper connection with the practice. Don’t think about it as a bucket list thing,” he said.

Once they begin, floaters feel incredibly relaxed in the tank. That relaxation is heightened because, unlike other forms of stress management, floating is passive. And floaters don’t even need to move for up to 90 minutes.

Mike notes that even those who have never practiced meditation before are often lulled into a meditative state in a float tank. Others may focus on the thoughts, emotions, or even grief that they’ve been putting aside during their busy lives.

“Floating induces a relaxation response to your central nervous system, and your body goes into optimal healing mode,” he said.

Float House Introduces Self-Care Routines for You and Your Partner

Building a floating routine can be even more rewarding if you and your partner commit together. Though floating has health and wellness benefits for individuals, floating with a partner can become another common bond in your relationship.

Mike compares floating to a weekend of camping — another activity couples may try to de-stress and disconnect from the outside world. But floating is much more efficient, he said.

“It creates an accelerated form of de-stressing by helping you get into that state more quickly,” Mike told us.

Mike recommends couples book a Friday evening float, so they can connect and recharge for the weekend. Even if you don’t feel like your week was that challenging, an evening float can help you reconnect with yourself and draw you closer to your partner.

“It’s like an intimate date with yourself,” Mike said. “People often have a powerful experience.”

Float House has expanded to six locations and has its sights set on adding more.

Over the last six years, the floating community in North America has expanded considerably, but Mike still wants to see more people prioritize both their physical and mental health through floatation therapy.

“It’s hard for people to carve out time to float,” he said. “A lot of people don’t even exercise, and now we’re asking them to take care of their mental health, too.”

Individuals and couples don’t have to devote a significant amount of time to floating to see the benefits. Float House recommends weekly float sessions for 12 weeks to optimize the health and wellness returns. When people try floating for the first time, Mike said he wants them to understand that they may experience new feelings, emotions, and sensations.

“Keep an open mind,” he told us. “Also know that your first float is just practice.”