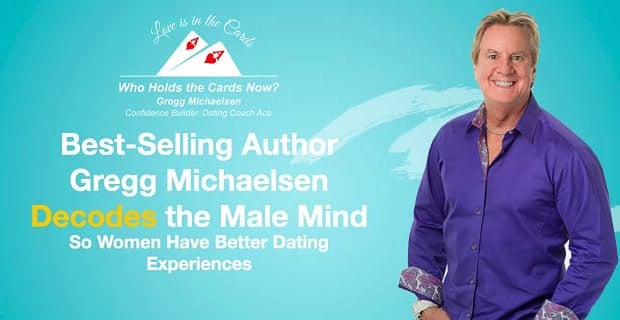 The Short Version: If you’re a single woman, chances are you have wished you knew the way to get a successful man to reply to your texts, and keep him interested for the long run. Well, tricks exist — and they all start with understanding the male perspective on dating. With more than 20 published books to his name, best-selling author Gregg Michaelsen is an expert on how to have the best dating experiences possible — and even get a guy back after a relationship is over. He also offers advice through his site, which has been ranked as one of the top 50 dating websites.

One day, author and dating expert Gregg Michaelsen got an email plea for help from a woman who was in a bad situation. Her husband had met someone else and had left her alone with the kids, but he wasn’t really out of her life. He would stop by her house all the time, play with her emotions, and make her think there was a chance he’d come back. Sometimes they’d even fall into bed together — only for him to leave and break her heart all over again.

“He was having his cake and eating it, too, and treating her so poorly. She was a mess,” Gregg said. “You need to have the motivation. Sometimes things have to be so low that you want to change, and you need the road map for change. I took her in, I told her what is going on in his head, and said, ‘This is what you need to do.’”

The first thing she did was set some boundaries so he’d have to call before visiting, and she wouldn’t be around when he saw the children. Then, Gregg encouraged her to start going out and building up her confidence through exercise and positive thinking. Suddenly, she got a raise at work, and her ex stopped treating her like dirt.

“She never took him back, and she could have. I warned her, ‘Right now, you think this man is the only thing worth living for, and he’s not. When you get your confidence, you’ll start to realize that you’re more high value than he will ever be. You may find yourself wanting to date someone else,'” he said. “And that’s exactly what happened. My clients are my friends. It was just wonderful.”

With more than 20 published books and a successful advice website, Gregg is the go-to guy for advice on how to get inside the male mind and turn around a dire love life. His site has been named one of the top 50 dating advice sites, and now he’s busy with television and radio interviews to help women improve their confidence and position in the dating scene.

Gregg’s path began when he was a boy, and his father was a life coach who ran a motivational institute. Over family dinners, Gregg’s father would encourage him to repeat positive affirmations and set goals to manifest into reality.

Gregg’s father was a life coach and imparted an interest in coaching on Gregg at a young age.

He has mixed his father’s techniques with what he learned from years on the dating scene.

“I’m a street guy. I was always that single guy, and some women have a hard time with that. They want to know what gives me the right to give them advice,” he said. “But I was that guy in my 20s who was a player and did the wrong things. Who better to have on your side than that person? It’s how my life used to be 30 years ago.”

In fact, Gregg was also the guy whose friends would crash on his couch when they’d split with their wives. After they stored their bins in a corner, Gregg would give them the advice they needed to get back on their feet. About seven years ago, one of his friends suggested that Gregg start a website to offer his advice to other men.

But, as Gregg soon discovered from trips out to bars and clubs, it wasn’t men who wanted to talk about ways to improve their love lives — it was women. So, he started writing books for women and discovered his calling.

“Build Yourself and He Will Come”: Advice for Ladies Who Struggle to Find Mr. Right

Finding, attracting, and keeping a good guy isn’t easy — as just about any woman can attest. The trick, Gregg said, begins with a healthy dose of confidence.

“I deal with a lot of confident women, but they’re not confident in their dating life and don’t understand why. All the dating advice in the world means nothing if you don’t have the confidence to execute it,” he said. “You need to have a great story to tell and passions or hobbies that motivate you, that make you interesting. When you’re busy and your time is valuable, you aren’t going to put up with a guy who’s going to waste that time, and you have options. You have to build confidence, which I start with.”

“When you understand how the male mind works, she can communicate and get what she wants — and he’s happy, too, because he’s getting the things he needs,” — Gregg Michaelsen, Author and Dating Expert

Once women gain that confidence, Gregg helps them understand things from a man’s point of view. Men communicate through actions, and they always want to win, he said. Stroking their egos will go a long way to getting what you want. He calls it “understanding man mode.”

“When she understands how the male mind works, she can communicate and get what she wants — and he’s happy, too, because he’s getting the things he needs,” Gregg said.

Gregg said he prefers to coach women through email because he can spend time customizing an effective course of action to help them find — and keep — a guy. Plus, all of his advice is written down so his clients can go back and review his ideas from anywhere.

“It’s very effective. I also have a $25 Question Button on the website, and I get three a day. People want to talk to me about their specific situations,” he said. “I’m unique in the sense that I encourage women to contact me — and they do.”

Gregg said he gets about 30 to 50 emails every day, and he does his best to respond to every question. All the requests and concerns provide plenty of inspiration for his next book.

Going In-Depth With 20+ Books and More In Production

Many of Gregg’s books, including his latest, “How to Weed Out the Users, Couch Potatoes and Losers,” are best-sellers because they’re based on women’s needs. They resonate so well because the issues he deals with are familiar to many women — especially those on the dating scene.

He’s also working on a book on best practices for texting and how to move on from a particularly tough break up. Plus, Gregg is being asked to do more television and radio interviews, so his audience is growing.

Gregg often gets book orders while driving around in his customized truck.

Still, he’s best when working directly with women, and even though he’s in a happy, stable relationship, he’s still out on the town.

He drives a truck wrapped with the covers of his books. At stoplights, he’ll get a notification on his phone that someone downloaded one of his books. When the driver next to him rolls down her window and asks him for a piece of advice about dating, he knows who made the purchase — and is happy to help.