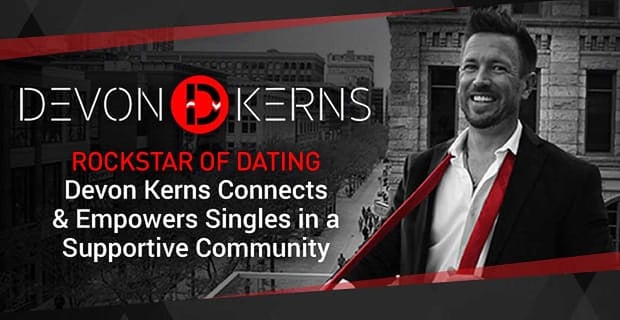 The Short Version: For singles who feel isolated and unfulfilled, dating coach Devon Kerns offers his emotional and professional support through instructive dating resources. Devon’s personal, group, and corporate coaching programs share strategies to connect with singles on a deeper level. His emotional intelligence allows him to understand and translate the needs of singles into a concise language — which he calls speaking Singlish. Devon is a revolutionary voice in the dating world, advocating on behalf of the over 2.2 billion singles in the world. His ultimate goal is to build a supportive singles community where unattached people can develop personal satisfaction regardless of their relationship statuses. With his free content and paid programs, Devon guides singles on a path toward self-fulfillment and love by focusing on building confidence, understanding single psychology, and improving interpersonal communication.

From a young age, Devon Kerns saw the world differently. He was more rebellious and emotionally aware than his peers and had a talent for connecting with people on the street and in his classes. “I was the one straight guy invited to the all-girls slumber party,” he told us with a chuckle. “I’d sit there fascinated by their talk and their minds.”

Devon Kerns is a dating expert with decades of experience connecting with singles on an emotional level and offering incisive advice.

In his 20s, he began coaching a girls soccer team, starting with a group of 13-year-olds and watching them grow up until their high school graduation. He witnessed those formative, social years and sometimes gave the girls advice about boys and relationships.

Then, in his career in leadership development, he found himself working with a mostly female sales team in a health organization. By talking to these women, he realized an employee’s relationship status affected work productivity in subtle ways.

“So, you see, there was a consistent theme throughout my life,” he said. “In hindsight, I feel like my entire life was engineered to bring me into this space of understanding and supporting singles.”

Today, Devon leads the single revolution as a professional coach, motivational speaker, and corporate consultant. On a mission to improve singles’ lives, he teaches open communication skills to daters and applies single psychology to business relations. His coaching curriculum focuses on personal growth and cultivating a deeper understanding of relationships in every aspect of life.

If you’re looking for someone to explain the nuances of dating culture, Devon’s free content provides a succinct summation of what goes through the minds of daters. His videos and blog posts offer a do-it-yourself online education full of direct advice to improve your dating prowess with direct advice.

Additionally, Devon founded a marketing company called Social Capital Advertising to raise the social value of businesses. He travels the nation at speaking and networking events to empower agencies to communicate with singles, who represent a growing global market.

“A lot of single people, particularly in the U.S., don’t feel part of a community. They’re individuals on their own,” Devon explained. “As the number of singles in the world increases, we’re going to need a community to support them and look out for them.”

For Devon, the first six weeks of dating someone are critical. “That’s when you see all these little red flags,” he said, “and little red flags compound into big red flags over time.” When talking to thousands of women about their relationships, he noticed a common mistake in ignoring red flags early on, choosing the wrong partners, and setting themselves up for unsatisfying relationships.

He believed he could show people how to get it right from the start and connect with the right person for their wants and needs. Currently, Devon’s personal dating coaching focuses on empowering single professionals, mostly female, who are between the ages of 28 and 38.

Known as the rockstar of dating and love, Devon Kerns coaches singles to change how they approach dating and become more in tune with their emotions.

This one-on-one course emphasizes the power of saying “no” (in life, business, and love), and it lends his insight into how the modern man’s mind works. In his workshop, he dissects and challenges the emotional scales of men and women in an accessible and enlightening way.

In 10 sessions, conducted in person or by phone, Devon helps singles make significant changes in how they view dating, emotions, and fulfillment. He guides clients to embrace their fears and own their strengths. By helping them reach a centered state of mind, he helps his clients find fulfillment in their current relationships (both romantic and unromantic) and enjoy dating — which makes them more attractive.

“After working with Devon, I discovered exactly who I needed to become to attract the man of my dreams,” one of Devon’s clients wrote in a testimonial.

Sometimes singles can feel isolated, like they’re struggling alone — but, in reality, there are so many people facing the same issues and battling the same fears. To show singles that we’re all in this together, Devon hosts group coaching programs for a minimum of 10 people at a time.

During this four-week program, Devon guides singles into establishing goals for themselves so they feel empowered to date with confidence. He shares his tips to mastering communication with the opposite sex and prepares singles to navigate the modern dating world more successfully.

“When you first meet Devon Kerns, what stands out is his confidence about the subject matter of dating.” — Victoria Yearly, a Devon Kerns client

If you want to improve your self-confidence and deepen your relationships, you can sign up for one of Devon’s coaching programs and draw inspiration from his experienced and empathetic leadership.

“People are really gravitating to my message,” he said. “Dating shouldn’t be something you dread. When you enjoy dating and have fun, it’s inevitable that you find love and fulfillment in your life.”

Devon’s persuasive methods apply to the business world as well as the dating world. As part of his corporate coaching program, he goes from agency to agency translating the needs and desires of singles into a marketing lens. His understanding of the psychology of being single offers businesses the tools to motivate customers and employees more effectively.

“If you or your team need training in sales, emotional intelligence, advertising optimization, or anything pertaining to performance, look no further,” said Shawn Richardson, the Content Manager at SoCap Advertising, in a recommendation on LinkedIn. “Bringing Devon on for consulting, coaching, or project development will, without a doubt, raise your ceiling for success.”

According to Devon, companies learning to speak Singlish doesn’t just make emotional sense — it makes dollars and cents. Ad campaigns that connect with singles can increase the company’s conversion rates and customer retention by about 64%.

“We want to raise the social value of those we work with,” Devon explained. “Out of that branding and marketing support, we really help them understand the single demographic.”

A Nerdy Team Stands Up For the Overlooked & Unattached

Devon Kerns relies on a talented team to build resources for singles and spread his vision for a more interconnected singles community. “We’re all nerdy in our own ways and our own rights,” he said about the SoCap Advertising team. “Essentially, we’re trying to bring daters from the online world into the offline world.”

With a shared enthusiasm for their work and mission, these marketers, writers, and designers put together a full menu of services for the single community.

The single revolution is founded on the efforts of passionate individuals at SoCap Advertising.

Eric Sutfin, the Chief Marketing Officer, makes sure the website performs well, while Devon’s content manager, Shawn Richardson, nerds out over language, and the team’s production guru, Mark Hessling, puts together dynamic and engaging videos tailor-made for singles. From community outreach to graphic design, this social capital team contributes to a positive culture of singledom and champions the rights of singles in their daily lives.

Going beyond coaching and content, Devon fights on behalf of singles on several different fronts. He advocates for fairer treatment for singles on important issues, like health care provisions and tax codes, and speaks in defense of this overlooked segment of the population.

By applying his emotional intelligence, Devon Kerns is revolutionizing the discourse on what it means to be single. His coaching programs, speaking engagements, and free content encourage open communication and self-confidence in the dating space. He helps busy professionals — particularly women — navigate a complex dating scene and define success on their own terms. Sometimes the most meaningful lesson he can teach is it’s OK to be single.

From decades of heart-to-hearts with single women, Devon learned to see dating from both sides and speak the single language, or Singlish as he calls it. By teaching Singlish to individuals and companies, he promotes a greater understanding of the emotional motives that govern our lives.

His philanthropic vision is to grow a community of millions of singles who feel fulfilled in their lives and valued in society.

“I have this big, audacious goal to fight on behalf of singles and bring them together in a community,” Devon said. “I’m focused on connecting, empowering, and inspiring singles across the board and on a global basis.”