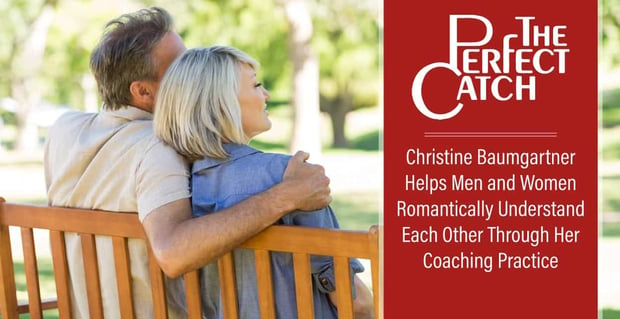 The Perfect Catch: Christine Baumgartner Helps Men and Women Romantically Understand Each Other Through Her Coaching Practice

The Short Version: On her 50th birthday, Christine Baumgartner decided she wanted to marry again, and she entered the dating field with gusto, a she puts it. However, it didn’t take long for her to discover that she only knew how to attract and date the “wrong type of men” for her personality. This led her to completely rethink her dating process, and, at the same time, she became proficient at online dating. Out of this, not only did she meet and marry her now-late husband, but she was also inspired to start The Perfect Catch, a dating coaching practice that helps clients find their own dating success. After the death of her husband, Christine’s practice started including widows and widowers wanting to learn how to date again.

Dating coach Christine Baumgartner often asks her new clients to cross their arms and tell her which one is on top. Then, she instructs them to switch their arms and cross them the other way. That action feels quite strange at first.

That simple tactic can help her clients think about their relationships differently. Many dating and relationship habits are so ingrained that people find it hard to imagine doing anything differently. That means they may keep falling for unavailable partners, or they may not have the confidence to approach an attractive person and say “Hello.”

Christine Baumgartner helps people learn how to attract the right partners through her practice.

“In my practice, The Perfect Catch, I’m asking people to think about their relationships differently. I’m not asking you to change your core. I’m just asking you to cross your arms in a new way,” Christine said.

The Perfect Catch has been up and running successfully for quite some time when Christine became a widow seven years ago. She said that getting through that difficult time led her to develop deeper connections with clients. Additionally, her grieving process introduced her to the world of widowed people, and this led to widows and widowers becoming clients, looking for support as they considered re-entering the dating field.

Her life experiences are often shared by her clients, many of whom were married for 20, 30, or even 40 years before losing their spouses. These people may find online dating intimidating, but they can turn to Christine for help in navigating their new journey.

“I coach people in their 30s to their 80s. Often, if they try to date on their own, they find themselves floundering and getting their hearts broken. But it doesn’t have to be that way,” said Christine.

Learn How to Overcome Shyness and Approach Others

Many of Christine’s clients want to find a partner to share their lives with, but they don’t know where to start. Most people believe that they’ll find the courage to approach someone who they find attractive when the time comes, but Christine suggests that they need to practice before that happens.

“People want to wait until they see ‘the’ person, and I say, ‘Don’t you want to be good at this when you meet someone interesting?’” she said.

Christine has worked with individuals and couples as a coach for more than two decades.

Christine said the first step in becoming more outgoing is getting active. That means joining a group that interests you or taking a class. For example, if you like to sing, audition for a local choir, or if you’re interested in art, take a local class.

But the idea behind seeking out those new activities isn’t to find a mate. Instead, you should only join activities that interest you. According to Christine, if you participate in an activity just to get a date, you’ll seem inauthentic.

What’s more, regular activities can help you get to know others and socialize around shared interests, and people also find talking to others who share their passions less intimidating.

“I always say to my clients, ‘Let’s look at your day and your week,’ and I can see why they’re lonely. Adding one or two regular activities will make you feel better and help with that loneliness,” Christine said.

Meeting and interacting with romantic partners is about learning to relate to others, and that is a skill that requires practice.

Christine said that her clients don’t just learn to interact with romantic partners using her methods.

“I’ve had people tell me they’re having better relationships with their boss and their kids. My methods help them with friends, family, and love,” she told us.

Christine works with men and women around the country, and she conducts most of her coaching over the phone. She finds that many couples face the similar struggles in their effort to understand each other.

In love, both men and women can sometimes communicate poorly, she said. They may not communicate in the same way or have the same expectations about a relationship. Christine suggests that the best way to improve a relationship is to understand where the other person is coming from.

Christine advises clients to focus on themselves when trying to find compatible partners.

For example, she said that women may form emotional attachments after they have sex, while men are not necessarily more committed after intimacy. That is why Christine tells women they should consider waiting to have sex.

“If a man is willing to wait, he’s interested in you. I made my husband wait a long time,” she said with a laugh.

Christine believes that men and women would have healthier relationships if they could understand each other better.

“When you understand where the other person might be coming from, it helps lower your frustration. It’s helpful to learn that people aren’t doing things to be annoying. One thing I like aout coaching is when the light bulbs go off. A client will say, ‘Oh, I never thought about it that way,'” she said.

But she doesn’t encourage her clients to be fake or behave in specific ways to appease a romantic partner. Instead, she advises clients on how to be authentic in relationships — while also accepting their partner.

“You don’t have to be fake. You get to be all of who you are. Many people say to me, I feel like more of me now,” she said.

Understanding who you are and who you want to be in a relationship isn’t easy, of course. Some of Christine’s clients need some tough love.

“I have great advice, but if you don’t take it, nothing’s going to happen. It’s hard work. It’s scary. It’s going to be uncomfortable, but it’s so worth it,” she said.

Christine said that, if singles want to work through their emotional baggage, they can’t just ignore what’s hurt them in the past. Instead, they need to address their issues with themselves. Otherwise, they may repeat negative patterns and habits or end a worthwhile relationship without giving it a chance.

But Christine said she believes that if clients work hard to overcome their issues, they may find a partner who has experienced something similar.

“One of the things I’m convinced about after 11 years of coaching is that somehow, either God or angels put people together who have similar baggage. And those people finally have the opportunity to work on their issues together and become stronger, happier people,” she said.

Similarly, Christine believes that people will attract what they put out into the world. If they think negatively, they’ll attract others who share their thoughts. But, if they believe they will be happy and meet positive people, they may attract different energy.

Christine wants her clients to live their lives the best way they can, and they can find more happiness doing what they enjoy for themselves rather than trying to meet new romantic partners.

Though Christine has helped hundreds of people find love, she never tires of helping others.

“When people’s hearts are broken, and I can help them learn how to finally find love — that’s so rewarding,” she said.