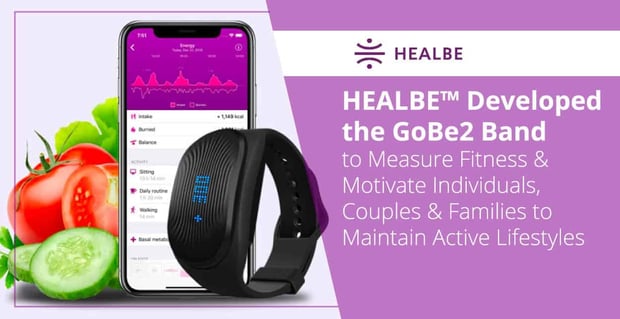 The Short Version: With its wearable technology HEALBE aims to change the way singles, couples, and families nourish their bodies, track their emotions, and look after their health. The company has developed the GoBe2 smart band, which can track nine facets of body health, including sleep patterns and caloric intake. HEALBE has pioneered unique and streamlined solutions for health-conscious folks looking to measure their daily progress toward weight-loss and fitness goals.

On New Year’s Day, many people resolve to get healthy by dieting or exercising more frequently. Gyms typically see a spike in membership in January, and lose-weight-fast diets become all the rage for a few months. However, as time goes by, people slowly lose their resolve and fall back into old habits.

Even people who meet their weight-loss goals can backslide and regain the weight before the year is out. According to the New York Post, 80% of Americans fail to keep their New Year’s resolutions.

HEALBE has developed a fitness solution to help people track their health and happiness levels.

If people want to get healthy and stay healthy, a one-time visit to the gym or a 30-day diet plan won’t cut it. They have to make long-term adjustments to their lives. Being healthy isn’t a once-a-year commitment — it requires daily action and conscious choices from waking up to go for a run in the morning to abstaining from midnight snacks before bed.

In 2012, HEALBE came on the scene to help people stay in touch with their bodies and track their progress toward better health. The company recognized a growing need for reliable information on individual eating, sleep, and exercise habits, so it released a wearable device that would measure it all. The GoBe smart band doesn’t just track your steps or your fitness — it can assess emotional levels and provide insights into sleep patterns as well.

This unique product has empowered individuals, couples, and families to gain greater body awareness and make decisions that align with their overall health and fitness goals.

“Our goal is to make changing habits even easier and smarter. We launched our GoBe wearable to befriend and help people manage their habits,” said Sasha Tikhomirova, Chief Marketing Officer at HEALBE.

HEALBE CEO Artem Shipitsyn is a tech entrepreneur with over a decade of experience working on mobile products. He heads up a global team working in the U.S., China, Japan, and Russia. Artem said he believes HEALBE technology can help people see where their bodies are at and then change their lifestyles for good.

Over 35,000 People Have Embraced a Healthier Lifestyle

Since its launch in 2012, HEALBE has spurred men and women of all ages to become more aware of their habits and maintain a healthy lifestyle. HEALBE’s target age is between 35 to 55 years old, but anyone can use the wearable bands to meet various health and fitness goals. HEALBE supporters include young couples hoping to lose weight before a wedding and working professionals who want to lower their blood pressure and get more sleep.

Over 35,000 people around the world have joined the HEALBE community and taken strides to improve their lives one day at a time.

GoBe2 has the potential to change the way people see their bodies and assess their health.

“We really hope that more people in love with life will join,” Sasha said. “We serve people looking for a better life quality, people who aim to keep their bodies in shape and have a meaningful socially active life.”

HEALBE caught people’s attention when it released the GoBe smart band as an all-in-one fitness tool, and the team has continued to improve on its original design, adding new features to meet the needs of modern athletes, health enthusiasts, and everyday people.

The newly released GoBe2 offers tracking on nine health parameters and is the first and only wearable device that can automatically measure calorie intake, body water level, and emotional tension. The device uses patented HEALBE FLOW™ Technology to detect and analyze changes in the body through the skin of the user’s wrist. Its non-invasive technology doesn’t disrupt one’s daily life and can provide accurate readings.

The GoBe2 also automatically syncs its information with the free HEALBE app, which can offer further insights and analytics regarding a person’s health, energy, sleep, and fitness. The HEALBE app is available in the App Store and Google Play.

The HEALBE team is currently working on a way to track glucose levels by using a high-frequency and low-frequency pulse. This would be a great help to people with diabetes.

“We are proud to say that HEALBE corporation currently has more than 60 patents,” Sasha said. “Our GoBe2 Smart band’s ability to track human body hydration level and calorie intake with almost 90% accuracy is validated by the University of California, Davis, and the Red Cross Hospital in Guangzhou, China.”

The GoBe2 band can measure a person’s calorie intake, stress levels, sleep patterns, and other body-related parameters, thus making people more conscious of how their habits impact their health. Wearing the band can motivate individuals to change their lifestyles so they can more easily lose weight, find love, start a family, and cultivate happiness in their day-to-day lives.

The HEALBE team aims to break people’s bad habits by arming them with information, resources, and technology. So far, they’ve received a lot of positive feedback from customers who made tremendous progress toward their health goals thanks to GoBe2.

By wearing GoBe2 bands together, couples can become more in sync with their bodies.

“HEALBE is pretty accurate, and I’ve lost seven pounds in three weeks,” said Denise Lambert-Snipes in a Facebook review. “It keeps me on point because I know it’s keeping track. I love it when it zaps me and tells me I had an emotion. It’s usually when I’m driving.”

An Amazon customer named P.R. Elliott said, “This is the most amazing product I have ever purchased.” P.R. Elliott said he had tried similar body-tracking products and found GoBe2 superior to them all. He particularly praised the automatic calorie-counting feature. “The best thing about this is the energy balance,” he wrote. “It tells you how many calories you burned vs. what you’ve eaten.”

Another Amazon customer said he lost 35 pounds in three months thanks to HEALBE. He said the calorie-counting feature has made him more aware of his eating and exercise habits, and he aims to end each day having burned 250 more calories than he consumed.

“These people know what features we need,” according to a review in the App Store. “I didn’t even buy this device for sleep tracking, and they solved that huge problem as a bonus on top of solving the reminding-me-to-drink-and-eat problem!”

The HEALBE team makes a concerted effort to listen to its customers and to stay aligned with their health needs and fitness goals.

HEALBE Helps You Stay on Track

It’d be great if we could all wish on a falling star and make life-changing transformations overnight, but that isn’t the reality we live in. Singles and couples have to get in touch with their bodies and make healthy decisions at the breakfast table, at the gym, and beyond.

HEALBE’s GoBe2 band has proven its merits as a fitness tool, the team wants to expand its appeal as a beauty accessory. A wide range of colorful bands is already available on the market to meet different tastes. In the near future, customers can expect the company to produce new versions of the wearable with elegant designs. The new stylish GoBe3 and its further generations will help people improve their bodies and look good while doing it.

Singles, couples, and families can benefit from the tried-and-true technology of HEALBE’s fitness bands. Singles can become more confident in their skin and attract healthy relationships, while couples and families can inspire one another to stay active and become more in tune with their bodies.

“HEALBE would like to provide couples with an easier way to listen to their bodies,” Sasha said. “GoBe2, the second generation of our wearable, is more than a simple fitness or activity tracker — it is a life tracker.”