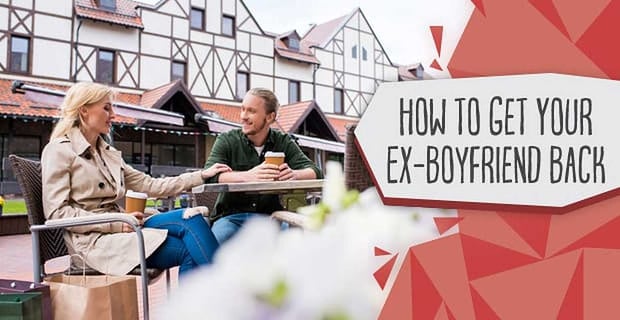 My parents have been married for 44 years, but they broke up for a few months while they were dating before they got engaged. I’ve seen firsthand that sometimes getting back with an ex can be a good idea. I wouldn’t be here if my parents hadn’t!

If you and your boyfriend have broken up (whether it’s been a week, a month, six months, or a year) and you want to rekindle things, here are eight ways to do that in person as well as over text.

In Person | Over Text

How to Get Your Ex-Boyfriend Back in Person (#1-6)

When you build a life with someone and get to know them better than anyone else on this planet, it can be devastating when you separate, but experiencing the pain is important. As a logical human being, you probably don’t want to experience that pain again. Thus, if you do decide to give the relationship another chance, you’ll want to be extremely calculated and only venture back together if you have a plan to handle past differences. With all this said, let’s look at the first six tips.

1. Be Willing to Tackle Past Issues

I want to start off this tip by saying that you should evaluate the relationship, not the person (aka your ex-boyfriend). I constantly hear from women “He is a great guy. He has a wonderful job and is financially stable, smart, articulate, and easy to talk to.” I say “Wow, he sounds awesome. How is the relationship?” And they’ll respond with something like “Well, it’s alright. He texts me once per week. He takes me out once per month.”

First, evaluate the relationship to see if you should actually be in it, and then let your ex know that you’re determined to make it better than ever. Photo source: chrisstring.com.

However, if you evaluate the relationship (not just his nice personality traits) and determine that it was good and you were both treating each other right, but there are some minor issues that need to be addressed, then admit that to yourself and to him and move forward with the rekindling process.

I have a female friend who is crazy about this one guy. If he asked her to be exclusive, she would say yes in a heartbeat. The only bad part about this guy is he has stated “I am not looking for a relationship right now.” However, my friend continues to hang out with him, have sex with him, and basically pretend they are boyfriend and girlfriend.

Take a good, hard look at how often you’re communicating with your ex, and ask yourself if it’s helping or hurting your cause. Give him a reason to miss you!

How does this relate to your ex? If you keep seeing him, texting him, or even being sexual with him, then he is receiving all the benefits without any of the responsibilities of a committed relationship. Some of you may say “Well, I like talking to him. I need someone to interact with, or I will feel lonely.” I feel for you, I really do. But think about what you ultimately want. Is your dream to get married and have a life partner? If the answer is yes, give him space and only settle for exclusivity.

If, for some reason, you never get back together, at least you made room for another guy to meet you. No guy will want to get involved with you if they know or even think you are still hanging out with an ex-boyfriend. Men hate to compete with other men when they’ve found a woman they want to give their heart to.

3. Have Fun With Other People & By Doing Other Things

Perhaps revisit some aspects of your life that you neglected during your relationship. Friends, family, work, charity, yourself — make sure to have balance in your life.

Spend your time focusing on the things you may have neglected during your relationship, instead of your ex, and he’ll see what he’s missing and that you can lead a fun, well-balanced life without him.

For example, if all your focus is work, and you have a bad day, you’ll be devastated. But, if instead you worked hard but also made room for friends and family or volunteering, when things go poorly at the office, you can turn to them for support or you can go kick butt at your favorite charity and still feel like a success. Basically, don’t have all your eggs in one basket and only rely on receiving good feelings from your ex/past relationship.

Giving other people and other activities your attention is also an attractive quality — your ex will see that you have a fulfilling life even when he’s not in it, and that’ll make him think about what he’s missing.

4. Go On Dates With Different Men

Is a new guy better? You won’t know until you get back into the dating scene for a while. You may find someone who you’re really meant to be with, or you may see that your ex really is the only guy for you.

If you sit at home, you’ll think about what you had. You may cry, and you may become depressed. However, if you go rock climbing, sky diving, or try any other adventure, you won’t be thinking about the relationship. Instead, you’ll be focused on the activity. Plus, trying something new and/or finding a new hobby will broaden your horizons and make you a more well-rounded person, and no man can resist that.

6. Date Each Other for a While Instead of Jumping Back Into a Relationship

Let’s say you broke up because when you argued, you both would yell and say horrible things to each other. Well, before you get back together, the two of you need to sit down and figure out the solution.

For example, in this case, it sounds like when both of you get emotional, it may make sense to call a timeout and revisit the conversation when emotions subside.

Ask him if he’s interested in taking things slow for a little bit to see how you both feel about getting back together. Photo source: flickr.com.

In this scenario, instead of hopping right back into a relationship, perhaps you should start dating each other again, wait until you get into your first argument, and see if both parties execute the solution. In this case, the solution is the timeout.

How to Get Your Ex-Boyfriend Back Through Text (#7-8)

Let me start by saying I hate texting. I would much prefer to talk in person or over the phone. Texting allows for miscommunication, and all the while doesn’t build any connection with the person you’re texting with. I’ll give you two texting strategies for getting your ex-boyfriend back, but please only use these if your ex won’t let you speak in person or talk on the phone.

7. Tell Him You’d Like to Talk About Something Important & Ask to Meet in Person

Try something like: “You are a great guy. I was wondering when you have a free moment if we could get together to chat in person?” This text lets him know you have something important on your mind that must be discussed in person. This text is also respectful of his time. Men love when a woman is respectful of their time. Whether your guy is a CEO or works two hours a day, he’ll appreciate this considerate gesture.

8. Send Him a Text That Attempts to Solve a Problem in the Relationship

Get his attention by texting him something you did that is directly correlated to solving the problem he had with you.

For example, if you broke up because he said “You’re a negative person and never want to try new things.” Say something like “You were right that I never try new things. I don’t want to be that person. I joined a lacrosse team a few weeks ago. We had our first game last night, and I scored a goal. Thanks for opening me up to new ideas.”

Take the initiative to approach your ex with a solution to a problem (or problems) you had in your relationship, and it’ll show him that you’re serious about making it work.

This is so powerful because it does so many things. First, it tells the man he was right. Men love to be right. Second, it tells your ex that you have changed the problem he had with you. Third, it shows that you’re having fun and will be fine with or without him.

Follow These Tips & If Things Are Meant to Be, They’ll Fall Into Place

I’ve also created a companion video to help you determine whether you should try to get your ex back and, if you should, how to do it:

Mike Goldstein is a one-on-one dating coach who helps men and women find love efficiently. He has been featured on "The Today Show," The Star Ledger, Reader's Digest, and Shape Magazine. Over 83% of Mike's clients enter relationships during coaching, and he currently has 100% client satisfaction. He is also an online dating expert who uses the data from multiple major online dating sites to ensure his clients are in the top 5% of successful online daters. FREE Gift: Ebook - "How To Find A High Quality Man In 3 Easy Steps AND The Main Reason You Have Been Choosing The Wrong Men."

5 Tips for Breaking Up the Right Way