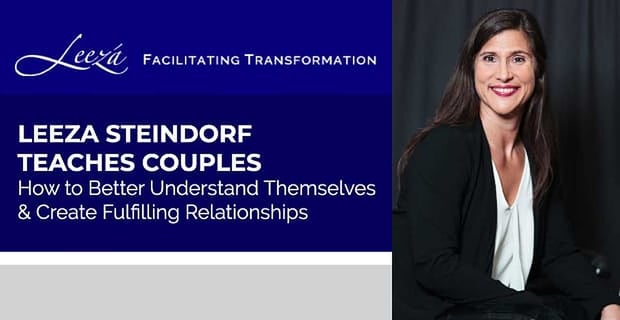 The Short Version: Transformation Specialist Leeza Steindorf brings her intuitive skills and humanistic background to clients looking to improve their lives and relationships. Using Socratic dialogue and a person-centered model, Leeza provides her clients with a blueprint for renewing their relationships with themselves and others. Leeza helps clients delve deep within to make them capable of falling in love with themselves and others by focusing on clarity, understanding, and communication. Clients can expect to learn how to clearly identify their desires and communicate them effectively whether they engage with Leeza in person, virtually, or at a retreat. Successful individuals and couples who commit to following Leeza’s guidelines take personal accountability for leading fulfilling lives.//

Transformation Specialist Leeza Steindorf is a bit of an anomaly in the life and relationship coaching world; she doesn’t want people to be “better.” She understands that people are already amazing; however, they may not be letting themselves shine through. Leeza helps her clients learn to live from a place of passion, power, and purpose.

Leeza has lived and worked abroad most of her life, and, through her experiences interacting with different cultures, she found one commonality: Everyone wants to be seen and accepted for who they are and to do what they love. Unfortunately, people aren’t hardwired to live this way and their paths and relationships can veer off course through lost energy, negativity, lack of clarity, and poor communication. It can happen in both our personal and professional lives.

“I’m a big believer that conflict is an illusion. I usually say to people, ‘So where’s the problem?’ Then they will tell me he did this, or she did that, but there is no identifiable conflict.” Leeza Steindorf, Transformation Specialist

“I’m a big believer that conflict is an illusion. I usually say to people, ‘So where’s the problem?’ Then they will tell me he did this, or she did that, but there is no identifiable conflict,” she said. “People end up seeing conflict as an object that’s between them, this force that needs to be overcome or broken through. I intend to make people see there’s no conflict, there’s no physical force between them.”

Leeza helps her clients connect by helping them realize they are two individuals who want to be heard and understood by the other person. To accomplish that, she works to help clients authentically and effectively communicate with their partners.

Leeza’s coaching is rooted in Socratic dialogue, which is asking questions out of sincere curiosity and helping clients see why they feel or react a certain way to a situation.

“I get into their world to understand where they’re coming from and why. Then, I get them to understand what they are feeling and why,” Leeza said. “When I can do that with each party, then they’re in a beautiful place to have a conversation.”

She gives an example of a husband who was angry because his wife wouldn’t wear the lingerie he bought her, and the wife was angry about his reaction. Rather than assume she knew why the wife refused to wear it, she asked her client, “Why did that make you mad?” While the wife initially responded it was because the husband wanted it “his way,” for the first time, she had to ask herself, “Why did that upset me?”

From there, the wife determined she was happy to wear lingerie but didn’t feel confident in the particular outfit he had in mind. When she offered an alternate style of lingerie, the husband enthusiastically agreed. Leeza helped the wife identify what she didn’t like about the request and found a middle ground that pleased them both.

Whether she’s working with couples or individuals, Leeza’s coaching centers around her clients being heard. When people feel they’re being listened to, they become open to support and accept others. If they don’t feel heard, or if they’re always fighting to be heard, they’re unable to connect.

Many people are too busy pushing themselves out there to be seen and heard that they don’t take the time to listen to — or understand — others. Leeza suggests three things people can do if that’s the case.

She provided an example to illustrate her point.

“If you’re in a relationship, you might say, ‘I want us to spend more time together. I want you to focus on me. I do not want to have cellphones on our dates,’” Leeza said. “These are very clear statements; there’s no vagueness to them. Once you state your desires, the other person can respond.”

They may agree with the first two items, but if your partner is a doctor or if you have children, he or she may need to have the phone out during the date. This opens up a clear negotiation. Each partner listens and understands what the other is saying, resulting in both partners feeling heard and important.

Another common issue Leeza helps couples deal with is boredom — both with each other and the relationship. Leeza said it all comes down to accountability.

“There is no such thing as boredom. Individuals often leave their interests in life — and themselves — to others. We end up in relationships with someone we love, who is a multi-faceted being and then we think, ‘Oh, he’s boring,’ or ‘She doesn’t turn me on anymore,’” Leeza said. “Well, what are you doing to turn up the flame? How are you being responsible for your own happiness? The idea of self-responsibility is big in my work. Only you are responsible for your happiness.”

Leeza has resources for people interested in intensive or independent work, as well. Her online Connected Communication Training gives participants three keys to authentic interaction. Participants learn how communication works, ways to communicate in any environment, creative and solution-based thinking, and how to both avoid and deal with conflict in a constructive way.

At the end of the training, participants can leave with a higher social IQ and more confidence in their interactions with others.

“After you’ve done work in your relationship, how can you understand someone else’s perspective? This training helps people learn how to do just that,” Leeza said.

Women who want to take an intensive approach to change can spend a weekend at one of Leeza’s Leeza’s Woman Undaunted retreats retreats. Leeza describes the retreats as empowering experiences where women can tap into their power and learn to differentiate between relationships and business.

“If they are in a leadership position in business, women often have to work in their masculine side to lead with strength,” Leeza said. “But when they come home and step into their relationship with a male, the male’s natural place is to be in that masculine place.”

Leeza is quick to point out that a woman has an equal voice in a partnership with a male, but having roles in a relationship is natural and can be relaxing. She describes the roles as a beautiful dance of compatibility between male and female.

At the Woman Undaunted retreats, Leeza spends time talking about female power, passion, and playfulness, which help women to define and live their purpose in the world.

Countless coaches compliment Leeza’s effective communication training and coaching. However, Leeza reflects on one unique couple who she was very grateful to work with.

“One couple met each other, fell in love, married quickly and then realized, ‘What have we done?’ They didn’t have the time to go through the logistics of really getting to know each other before they married,” Leeza said. “I gave them the tools to grow their intimacy and communicate. They both recently told me that it saved their relationship. They would not be in the relationship they’re in had they not worked with me.”

Many couples come to Leeza on the brink of divorce, but she helps them explore their relationships with each other — and themselves. Her mission is to help each client evaluate the real reasons behind their issues and move forward united.