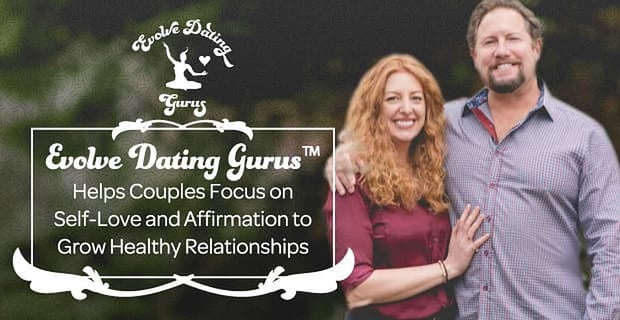 Short version: Chris DeCicco and Kendra Seoane’s Evolve Dating Gurus is unique in the world of matchmaking. Rather than merely pairing available singles, Evolve Dating Gurus combines therapy, dating coaching, and dating strategy — after that comes the matchmaking. This progression mimics the Evolve Dating Gurus philosophy: A person is only ready to date when they’ve done the work on themselves. Chris and Kendra have had significant success in pairing singles because, once a person believes they’re a worthy match, they’re more likely to find love.

Evolve Dating Gurus Founders Chris DeCicco and Kendra Seoane believe everyone can find love, but only if they’re open to it. Before finding love, they have to believe it’s possible.

“We were recently working with a gentleman in his 60s who’d been married a couple of times. He was uncertain about his needs and prospects,” Chris said. “He wanted a companion, but he didn’t come to us with high hopes. That’s where people get stuck — they start to talk themselves out of what’s possible.”

Evolve Dating Gurus’ Kendra Seoane and Chris DeCicco are partners in business and in life.

Instead of asking clients to settle or be more realistic in their expectations, Evolve Dating Gurus recommend clients “go deeper into the dream,” as Chris describes it. That means opening up their minds to bigger possibilities.

“With this client, we expanded his mind, and, within a month of starting with us, he was getting multiple dates a week. He ended up meeting his partner, who lived in the same building he did, through expanding his belief in what was possible,” Chris said. “He met someone who had been there all along.”

Chris and Kendra, who are both professional and romantic partners, understand why putting your needs out into the universe is so important. They found each other soon after articulating what they wanted from a relationship.

“We were both in a place of feeling confident about finding our person,” Kendra said. “We weren’t worried about it. A week before I met him, I had this moment where I just yelled out, ‘I want this kind of man!’ And I listed the qualities I wanted.”

But it can take open-mindedness and persistence for two individuals to become a couple. Often, our preoccupation with the romanticized version of love can stand in the way.

Kendra was able to see past those unrealistic expectations and through to the real Chris.

“Chris and I started to click, and then we realized we were soulmates. The fourth time I saw a shooting star over his head, I realized we had something,” she said.

Organically Developing a Business Based Around What Clients Need

Kendra and Chris didn’t start out with the goal of creating a matchmaking business. In fact, they had an idea for a unique way to bring singles together.

“We came up with silent speed dating,” Kendra said. “My background is body-movement based, so we had stations, and instead of talking, you’d get a nonverbal or verbal prompt. We might have people embody an animal they identify with or give each other a massage, so you’re interacting on a different level.”

Evolve Dating Gurus has remained a unique service within the world of matchmaking by combining their expertise and responding to client needs. Even though they have moved on from those speed-dating events, Chris and Kendra still take an innovative approach to matching clients.

“We didn’t want to do matchmaking in a traditional way, which is building a database of available singles,” Chris said. “What we found was that, no matter how many dates you go on, if you’re not in alignment with what you’re wanting, you could go on a million dates that wouldn’t work out.”

The business’ name might suggest that Kendra and Chris are the “dating gurus.” But this is not the case at all. Instead, clients direct their own journeys of self-discovery and love. Chris and Kendra encourage clients to listen to their inner wisdom and inner guidance, in essence becoming their own gurus.

She explains an instance of this guru-focused philosophy in practice.

“We asked a new client for some photos, and she sent some with her hair kind of a mess and a weird facial expression. We asked her, ‘What do you think of these pictures?’ By asking several questions like that, she could see that her pictures reflected more significant issues that go deeper than the photos. If we had just focused on the photos, we wouldn’t have seen the other place revealed. Now we can move forward with her.”

This spirit of originality is what helps daters who use Evolve Dating Gurus remain successful. One of the most significant facets is that Evolve isn’t just for matchmaking. Clients get more than just a list of singles; they have the opportunity for self-improvement.

“With us, you’re getting a combination of a coach, therapeutic help around bad patterns and types of people you’re attracting, and the matchmaking piece which comes in a progression when people are ready,” Chris said.

Before clients can start dating, they need to understand themselves and what they want out of a relationship. They begin with mentoring and coaching to help them with the deep growth required to build a foundation for how they present themselves.

“We’re not only helping people find their partner but helping them find love within. Through that, all their relationships improve — starting with themselves.” — Chris DeCicco, Co-Founder of Evolve Dating Gurus

Evolve Dating Gurus is not a dating service, but rather a way for daters to reconnect with the qualities they appreciate about themselves.

“We’re not only helping people find their partner but helping them find love within,” Chris said. “Through that, all their relationships improve — starting with themselves.”

Many people spend so much time searching for a romantic partner that they forget what they want from life.

“When they remember how much they like spending time alone and the hobbies they hadn’t slowed down enough to do, they create this passion in their lives that’s not dependent on a relationship,” Chris said. “That attitude translates to another person who is in that space. We help our clients share life from a place of feeling full.”

Encouraging Daters to Rediscover Their Excitement for Love

Many daters can get discouraged by the tediousness of dating, especially in the digital age. Before Chris and Kendra create matches for their clients, they want to help them get the excitement back.

“We teach them to do online dating in a way that feels good to them,” Chris said. “If they’re not excited to do it, they set it down. Spend 15 minutes a day on it instead of two hours.”

One of the ways they help those discouraged by dating is through their Dating Detox Online Course. The course helps them get out of the dating rut they’re experiencing by teaching them how to feel love without a partner first.

The Dating Detox Online Course helps people get out of a romantic rut by looking inward.

Chris and Kendra said that many of the negative emotions surrounding dating can be attributed to a lack of self-awareness.

“During this downtime, we suggest clients reflect inward and shift some of their beliefs about how hard dating seems to be,” Chris said. “They need to examine their part in showing up on dates and what that’s attracting. What type of messages are they sending? We help change people’s mindsets about dating.”

Flipping the Script on What Matchmaking Can Be

Kendra and Chris appreciate the opportunity to help others find romantic connections because they’re so satisfied by their own partnership, and they enjoy helping others find the same happiness.

Evolve Dating Gurus helps couples enter more pleasing unions by changing the perspective that would-be daters have on themselves.

“We don’t come from a place of, ‘You’re broken, let’s fix you,’” Chris said. “A lot of people believe they’re desperate, but we don’t believe in that story. We start right away reflecting all the things we see that are positive about them, and we work with the future vision of what they want to manifest in their life.”

A better love life doesn’t simply happen because a client wishes it to be, though. Instead, they need to put in the work — both to get in touch with themselves and focus on love.

“Clients have to be willing to self-reflect and do some inner growth work around relationship intimacy, love, and beliefs,” Chris said. “Our business is more than just sending them on some dates. It’s a unique approach.”