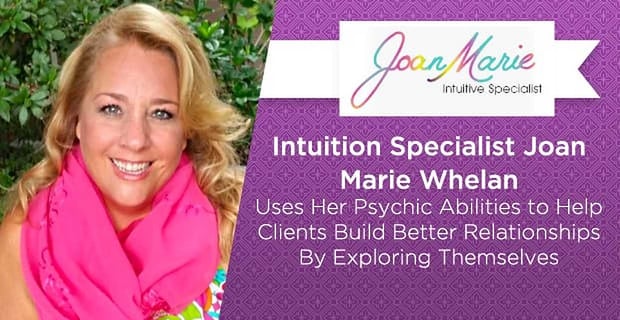 Short version:  Joan Marie Whelan has been an intuitive — someone with innate accurate insight — since her earliest memories. Intuition can mean psychic ability, of course, but she doesn’t prefer the connotations that come with the latter term. She had trouble accepting her abilities until a traumatic accident 20 years ago led her to reconnect with herself. Joan Marie recognized she could turn her anticipation of events and connection to a higher power into a career that helped others. Nearly two decades later, she has taught hundreds of clients find love — by first finding themselves — and she’s turning her attention to reaching a larger audience through a book for teens, a television show, and even a romantic comedy.

Intuitive Joan Marie Whelan understands that loneliness doesn’t just befall people who lack connections with others. Instead, it can happen to those with plenty of friends and relationships.

“Loneliness has nothing to do with if somebody is in your life or not,” she said. “Being lonely is a message that tells you that you’re disconnected from yourself. You could be in a crowded room with 50 million people and be the loneliest person in the world.”

But what can individuals do to feel more connected? Joan Marie explains that it’s all about developing a better understanding of yourself. She promotes improved self-understanding through multiple channels, including books, events, and online courses.

Joan Marie Whelan knew early on that she had intuitive abilities.

“I help people feel emotionally whole, so they can enter a relationship from a very grounded place,” she said. “Many people are not connected to the divine light within themselves.”

If an individual wants to be in a relationship but is disconnected from that light, they may feel a sense of failure. Instead of searching for a partner, Joan Marie suggests they first connect with themselves. As an intuitive, she helps troubled individuals find the inherent purpose they lack.

“What I teach has nothing to do with religion, it has to do with the highest vibration of divine love. People need to understand they have an amazing team on the other side. Whatever their beliefs, it is amazing when they raise their vibration and connect with that frequency.”

Sometimes, Joan Marie receives very detailed messages about clients from the high frequency with which she is connected.

“I used to do this radio show in Palm Springs, and this woman kept calling in. I said to her, ‘You’re going to marry a man named Jeff. He’ll have so much plaid in his closet. He plays golf. He’s on the shorter side, and he has the most gorgeous baby blue eyes.’ Two years later, the woman met Jeff, and she walked into his closet, and there was all this plaid,” she said. “Now they’re married.”

Her History With the Metaphysical

From early on in her life, Joan Marie could always make predictions that would eventually come true.

“I was born incredibly psychic,” she said. “I don’t often use the word ‘psychic’ because people have connotations with it, but that’s what I am. I was giving messages since the age of 5.”

Despite the innateness of her gift, Joan Marie never considered a career in the field of intuition — mostly because she didn’t know the profession existed. She also didn’t take her predictions entirely seriously, a failure of self-trust that led to one of the most significant moments of her life.

“I was in a head-on car collision 20 years ago. I predicted the car accident, but I didn’t feel worthy enough to say we can’t leave the house today because something bad will happen,” she said.

After the accident, she had no choice but to take her intuitive ability seriously. Her predictions then became stronger and more persistent than ever before.

“My abilities to intuit came back like when I was a child,” she said. “I was very open, but it was tough to be in the world. Once, I was in a restaurant and saw a man who was going to die that night.”

As she found ways to better understand her abilities by reading about the brain, science, and medicine, she also found people interested in receiving her guidance. She met people through her medical training who urged her to start taking clients because they wanted to work with her.

After she started taking on clients, her practice grew at a rate that was beyond her control.

“I was just word of mouth. It was that easy and not planned at all. I had a line of clients out the door,” she said.

Heal Yourself By Celebrating Your Imperfections

Even if someone seems like a confident, self-assured person, he or she likely still have some deeper insecurities. Joan Marie uses herself as an example.

“I was very successful, but I had all this emotional unworthiness pouring out of my body,” she said. “I looked at myself and wondered, ‘Is the unworthiness ever going away?’”

We often hide the parts of ourselves we dislike or actively work to repair them, but Joan Marie helps people take a different approach, one that she took herself. She suggests opening up and embracing your feeling of unworthiness as a part of yourself. She said that once she started to love her own insecurity, it was gone. Honoring the different emotions in our bodies can help them be purified.

That strategy worked for Joan Marie, and now she teaches others to appreciate their imperfections rather than dwelling on them.

“We all have work to do, and we all have emotions, but the work is to love that piece of you, not to hate it. I get clients to cheer and love their issues, to celebrate them. When you feel whole within, someone else can connect with you, and learn to love you from there,” she said.

Once people accept themselves, then they can form the kinds of bonds they’re looking for with others, and a healthy relationship begins with whole individuals, according to Joan Marie.

“From a healthy place, you can accomplish anything you want in life. Some people are just craving to date or keep busy. They don’t want to deal with themselves, but the best thing you can do is deal with your emotions,” she said.

Moving forward, Joan Marie has plenty of projects to keep her busy as she plans to bring her intuitive gifts and philosophy of self-connection to a broader audience.

“I decided to write my own movies to put my life on the screen. I’ve written a romantic comedy that’s very fun. It’s about how we feel when the guy says he’s going to call, and he doesn’t. It’s about breaking free of the family business. Hopefully, we’re going to begin production this year. I hope people can laugh and heal from my movie,” she said

“I don’t think people are supposed to be alone in this lifetime. They’re supposed to connect, interact, date, and fall in love. What makes a good person creates a solid foundation for a solid relationship.” — Joan Marie Whelan, Intuitive Specialist

“I want every woman to know our bodies are ours. It doesn’t belong to your partner. I think it’s important for young women to respect their bodies and honor the sacred goddess temple of being a woman,” she said.

No matter how many fields she enters, though, Joan Marie still holds onto a singular message.

“I don’t think people are supposed to be alone in this lifetime,” she said. “They’re supposed to connect, interact, date, and fall in love. What makes a good person creates a solid foundation for a solid relationship.”

You can reach Joan Marie Whelan via her website, www.joanmariewhelan.com, or telephone number, (941) 954-9001.