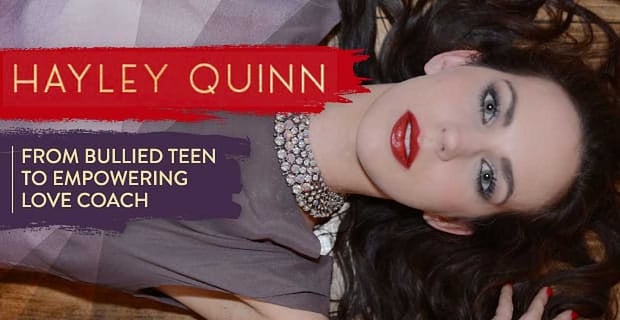 The Short Version: Hayley Quinn is a love and life coach who uses her own struggles with childhood bullying, low self-esteem, and dating to help singles (especially women) who are experiencing similar situations. Her down-to-earth approach demystifies “dating rules” that often hinder people, and her relatability inspires them to become truly happy with themselves — which she says will ultimately lead them to the relationship they’ve always wanted.

While growing up in the small town of Cornwall, England, Hayley Quinn was constantly picked on by her peers. They saw her as the fat girl, the dorky girl, and the shy girl — never the pretty girl, the popular girl, or the funny girl.

What Hayley’s classmates didn’t know was her family could barely afford food and electricity — let alone cool clothes from the hippest teen store. Because of this isolation, Hayley never had a boyfriend in school. In fact, her first kiss was with a boy whose friends had bet him 50 pence that he wouldn’t kiss her.

As a kid, Hayley was bullied and never had a boyfriend, but those struggles motivate her to help others.

We’ve all been through rough times, especially during childhood, where other people have made us feel unwanted and unlovable, but instead of listening to her haters, Hayley turned a negative situation into a positive one. She learned to be accepting of all types of people no matter their appearance, social status, or differences. Hayley also learned to rock her dorkiness and that dating will fall into place when and how it’s supposed to.

It’s these hard but influential life lessons that inspired Hayley to become a date coach — teaching singles that self-esteem and dating are interlinked. If they’re happy and content with who they are and what they’re doing with their lives, the right person and relationship will find them organically.

Not only was I thrilled that I got to speak with a fellow Hayley, but I loved hearing more about how she got into the dating industry, the journey she’s taken since then, and why her self-love message is especially important for single women.

Pickup artists often get a bad rap. People can assume they’re money-hungry cons who teach men how to trick women into sleeping with them. Hayley believed this as well until she attended a pickup artist convention in Las Vegas. It was there that she saw the practice for what it really was and that a lot of the stereotypes didn’t hold up.

Hayley began her career in the dating industry as a pickup artist.

The pickup artists weren’t curly-mustached villains stealing wallets out of naive men’s pockets, and the clients weren’t beefed-up bros just looking to get laid. These were genuine guys who, for whatever reason, did not know how to communicate with women and were seeking personalized advice from the experts.

Hayley left feeling motivated and that this was her calling. She then threw herself into the community, even living with 6 male pickup artists so she could learn everything she could from as many people as she could. Her natural talent and passion soon led her to become the go-to expert for sites like Online Dating University, where she gained the title “The World’s Leading Female Pickup Artist.”

With Hayley starting out as a pickup artist, and a female one at that, she has a unique perspective than most dating experts. She’s seen where single men are coming from and what approaches work and what approaches don’t work. And that’s helped shape her career from the very beginning.

A Dramatic Event Brought Hayley Closer to Her Female Clientele

During our conversation, Hayley was extremely genuine and open, especially when sharing with me how the miscarriage she suffered in 2015 changed the direction of her career. Always one to look for the silver lining in any situation, Hayley saw this as a sign that she needed to help single women and address their individual problems even more — transitioning from pickup artist to life and love coach and motivational speaker.

“I still love working with male clients, but that made me more passionate about women’s issues when it comes to dating and love because I experienced something so major myself,” she said.

Hayley is refocusing her teachings to show women how to love themselves before loving someone else.

Particularly, when looking at the men and women’s dating advice that’s out there, Hayley noticed huge disparities. Most of the tips for women were based on fear — fear of getting older and not being desirable, fear of saying the wrong thing, fear of losing the guy. But most of the tips for men were about becoming the best version of themselves, staying true to their values, and building a great life — then that would attract “The One.”

“Women need to hear a message that’s more in line with that,” Hayley said. “I find it quite sad that a woman will worry about bringing something up, like if she wants to be in a committed relationship, because she’s worried she’s going to come across as desperate or needy or scare the man off. And I’m listening to women say that and thinking ‘Well if he’s going to get scared off, let’s scare him off.’ My message now is very much based in boosting women’s self-esteem and getting them to think about dating and love differently.”

Hayley also concentrates on showing women that they’re in control of how their love lives turn out — nobody else.

“Saying ‘Where are all the good men?’ creates a subtext which suggests good men are in scarce supply and there are good and bad men out there like in a fairy tale, and that’s not true,” she said. “Instead, it’s more appropriate to think that people usually treat us how we allow them to treat us. It’s our responsibility to communicate what we want, and if someone isn’t on board with that right now, we need to be comfortable to see that red flag and let them go rather than say ‘I just met a bad boy’ or ‘I’m addicted to bad men.'”

Most people at one point or another in their single lives have experienced dating where it almost becomes like a game — seeing who can be the care less, the least available, and never the initiator. Hayley cites these gray areas in dating, especially online dating, as her clients’ top concern.

“My clients are concerned with what I think is a modern-day dating phenomena — the fact that it’s strange to say hello to someone in real life, the fact that there isn’t a clear progression in relationships, the fact that things like not calling for two days don’t make sense anymore because we all have instant means of communicating with each other,” she said.

So whether it’s through entertaining YouTube videos, informational webinars, insightful TED Talks (like the one above), or one-on-one coaching, Hayley prides herself on providing quality, ethical advice that helps her clients navigate these gray areas and think about their long-term wants and needs, not just instant dating gratification.

Hayley calls this her principle-based teaching. For example, instead of teaching singles how to memorize a bunch of pickup lines to use in online dating or questions to ask on a first date, Hayley will teach them a concept like how to be authentic and let the conversation flow naturally so a real connection is created.

“It starts with the perspective that the important part of the interaction is not about seducing the other person — it’s more about self-expression. And if you do that well, you will be able to connect with the right people. It’s not about impressing or wooing anyone else — it’s about doing you and doing you really well,” she said.

In one way or another, everyone’s got some kind of baggage that can trickle into other aspects of their lives. Hayley is inspiring because she hasn’t let her baggage bring her down. Instead, those negative experiences have given her an outlook on life, dating, and love that’s refreshing and unconventional, especially in the way she presents her advice to other people.

She strives to help singles forget about all the so-called “rules” that are projected onto them by the media and our culture in general, and she hopes to address this issue even more in the book she’s working on.

Particularly, she wants to continue on this path of empowering single women, so they can stop feeling like they have to Google things like “how to get a boyfriend” or “why doesn’t he like me” and start putting themselves first, which will have a positive effect on the way they date.

“As soon as you’re thinking like that, you’re already kind of losing, and I want women to start actually thinking about what serves them, what’s good for them, and act much more powerfully in terms of love and romance and understand that love really is an exercise in taking care of yourself and expressing yourself first — and he comes second,” she said.