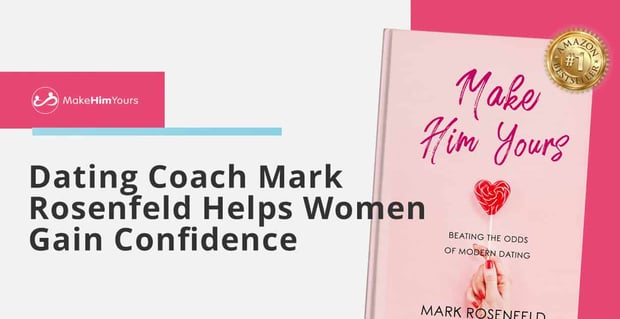 The Short Version: Dating and relationship coach Mark Rosenfeld hasn’t always been comfortable around the opposite sex, but he challenged himself to change and improve. Today, he helps women make similar personal progress and overcome their dating and relationship roadblocks. Mark has developed one-on-one coaching programs that empower single women to feel more confident and ready for love. He has written a self-help book about beating the odds of modern dating, and now the Australian coach has moved to Las Vegas with plans to expand his reach in the U.S.

You wouldn’t think that one of Australia’s top dating and relationship breakthrough coaches struggled with dating issues or suffered a confidence crisis, but Mark Rosenfeld’s story starts off exactly that way.

“I came from a background of massive social anxiety actually, so I grew up as a pretty shy kid,” Mark told us. “Just to be frank, I didn’t have any kinds of skills and really lacked any kind of social connection in my life, especially as it related to women.”

Mark Rosenfeld overcame his social anxiety and now teaches others to do the same.

Mark buried himself in his studies and had plans to become a veterinarian. Then, in 2009, he decided to confront his fears in the social scene once and for all. He wanted to change his habits and lifestyle, so he began going out of his comfort zone and forcing himself to talk to women.

“The pain of loneliness became greater than the action it took to change,” he said. “I spent the whole year in nightclubs. After a year of that, I developed a lot more confidence in social settings.”

The club scene gave Mark constant exposure to the places and situations that scared him the most.

As Mark came into his own, he inspired others to follow a similar path of self-growth. Men began asking him for dating advice, and he started to offer coaching lessons on dating and relationships. Then his career took an unlikely turn, and he started working as a stripper while on his way to his veterinary degree. Two years later, Mark had grown so comfortable around women that he began doling out advice.

Now Mark has created a coaching brand where he shares his unique perspective and helps women find love by learning to love themselves first.

Helping Women of All Ages and Dating Experience Levels

Mark said his experience at nightclubs and strip clubs opened the door for him to better understand women. He listened to women talk about their dating and relationship experiences, and he saw an opportunity to grow his own understanding.

“That just fascinated me, hearing women’s stories,” Mark said. “I just had never thought about that side of the equation.”

In 2015, a single woman asked if he would be willing to coach her in the dating scene. Mark said yes and began building a coaching structure that would work for women. He began making advice videos geared toward the ladies. Soon, his career as a relationship coach for women took off.

Nowadays, Mark works with a lot of women who are struggling with dating anxiety and social awkwardness. Some are young women who are still in school, and others are established in careers as CEOs, doctors, and other professionals. Mark has expanded his coaching services to help women create and maintain empowering long-term relationships.

“There is a nice mix, and it allows me to work with many different people,” Mark said. “I help people who have a lot of dating anxiety. Some come from really tough parental backgrounds and struggles growing up.”

Mark said he has helped women work through all kinds of insecurities and set them on a path toward building a deep and loving relationship.

Despite the challenges in their past, all Mark’s clients are looking for a meaningful connection and are willing to put in the personal growth work to make it happen. Mark said he feels particularly proud when he sees a woman take ownership for her own baggage and commit to changing habits that aren’t working for her.

Every now and then, one of Mark’s client will invite the guy she’s dating to the sessions, and Mark gets an extra boost from working with the couple and helping them build the foundation for a solid relationship.

Mark tailors his personalized coaching program to address the issues facing his clients. The first step is to get together and discuss what those issues are. Mark works with his clients one on one, and he only takes on a handful of clients at a time to ensure he can give them his full attention.

“All of my programs are custom built, but there are also some core exercises that are useful for all,” he said. “Depending on your specific challenge, the programs are tailored to you. ”

“Make Him Yours” is Mark’s guide to modern dating.

After a long talk with his client, Mark creates a plan that takes in account who she’s been in previous relationships and who she wants to be in the future.

Oftentimes, women must first address traumas that came from the past. That may mean finding closure from a toxic relationship or dealing with childhood trauma. Mark spends a lot of time focusing on these issues before he encourages his clients to get back in the dating scene.

“We set a foundation, and after a month or two, we get our hands dirty and practice these values in real life with men,” he said. “It’s all well and good to love yourself, but can you consistently show up for yourself in relationships with men? If not, let’s address it.”

Women can put their self-work to the test by dating and building relationships. It’s an opportunity to assess their struggles and find new ways to succeed. Hopefully, their new insights lead to the type of epiphany and transformation that earned Mark his title of  “relationship breakthrough coach.”

Looking to the Future: A New Book and Events Planned in Las Vegas

In 2020, Mark took his coaching skills and turned them into a dating advice book entitled “Make Him Yours: Beating the Odds of Modern Dating.” The book takes the reader on a journey of self-discovery and creates a foundation for them to create healthy and happy relationships for the rest of their lives.

Mark said the book has a chapter that talks directly to single mothers and senior women in the dating scene. His insights were inspired by the work he did with a woman who was struggling to find her Mr. Right.

“She had pain around relationships and pressure about her biological clock,” he said. “She messaged me two weeks ago to share that she’s been seeing a wonderful guy for five months, and she knew it was a reflection of the work we’ve done together.”

Recently, Mark moved from Australia to Las Vegas to spread his message of hope and encouragement with American women. He plans to take on new clients and organize live events for singles who are ready for love but may not know how to get there themselves.

“We need human connection, and that’s what I teach my clients,” he said. “I get to really grow through my work as well. I feel my job really has a point and a purpose.”